One of the not]proslulejších pages in the history of the Škoda ammunition company wrote a heavy gun for ground artillery. And one of the earliest heavy mortars, hence a kind which before the first world war spread in Germany and Austria. It had its reasons, because both armies had to count in the war with the struggle against the bulwark. The first in a series of heavy works, which in škoda auto was established, was 24 cm moždíř vz. 1898, at the same time the first heavy field gun of such a caliber designed for a floating war. Škoda at him, obviously already applied the brzdovratné equipment and a steel barrel, this one has the screw in the conclusion. In order to acquire as much opinions about this new weapon, to allow the austrian authorities to škoda auto to moždíř in the 1900's, exposed at the world exhibition in Paris. Moždíř bought the English, zvýšlll somewhat with his performance. and they used it as a 9,35 inch howitzer in the peanut war. Experience and actual tests have shown the need to increase the mobility of the guns.
In the years 1908 and 1909 introduced because the austrian artillery — in its history for the first time ever — to moždíři motor traction wheeled tractors of about 80k. Performance cannon (133/258/5800) - (the figure indicates the weight of the projectile in kg initial speed in m/sec. and maximum range), however, remained too low, particularly given the further modernisation of the Italian forts. Škoda therefore constructed a larger cannon and the manufacture of mortars of 24 cm to a grinding halt. During the first world war, however, the austrian army used a total of 48 pieces, and not only on the austrian battlefields, but also in Turkey, in the battles for the Dardanelles.

New larger gun, 30.5 cm moždíř vz. 11, the weir in its then form mean really peak performance of defence equipment in the world, strongly contributed to the international fame of Skoda. It was not, naturally, at once and without difficulty. From the requirement of the military to the final realization of the five years (1907-1911). Škoda works had to in close collaboration with army experts to overcome for the cannon and its ammunition variety of the initial glitches. Particularly difficult was then to ensure a reliable transport in such difficult terrain as ]e alpine and the fastest possible transfer from marching position in fighting. Škoda here for the first time gave to a path, which then has remained true throughout the production period of heavy works. Moždíř is dopravoval decomposed in three parts (barrel, lafetu, mortar bed) in three transport units (wagon hlavňový, lafetový, ložišťový). The preparation of the guns in firing position in the average did not last any longer than 6 hours. This was used just a simple kladkostrojů and jacks. Of course in the account came only to motor traction. Cannon stood at an average speed of firing 15 ran/h.

At that time the high ballistic performance of the mortars (380/330/9600) ensures the robust effect of every wound. The larger could be the beginning of the war from land-based works only boast of the German 42 cm moždíř d/12 (indication of the length mainly multiples of caliber - in this case, therefore, the 12 x 42 = 504 cm) on the performance of the 810/333/9 300, known as the Fat Berta". There was, however, then only in two pieces (the austrian moždířů was 24) and its still nedozrálá construction (pci) pfedevším his rudeness, těžkopádností and nepohyblivostí. Indeed, its a 4 unit pri transport of the weighed 76,4 t, whereas the austrian mortars of 32.9 t.
It was therefore not surprising, from the German command already in the beginning of their offensive in the west in r. 1914 required the assistance of the austrian moždířů and 4 batteries after 2 cannons got with the unexpected effect against the belgian and French pevnostem. On the Russian front then surprised the use of moždířů directly in the poll yet for the moving phase of the conduct of war.

The war experience also showed that it is absolutely necessary to intensify the vehicles and the mortar bed. And it happened at vz. 11/16. Managed to finally, especially the extension of mainly two caliber, can significantly increase the range (to 12 300 m) and the range of delivery extend to the full 360°. So there was moždíř vz. 16, which up to the beginning of the thirties not in his class rival. After 1918, it introduced into the armament of the Italian and the yugoslav army, and also, naturally, the czechoslovak, which served until 1939 as gun the largest calibre in the total number of 17 pieces. To the intended renovation and equipment rental tires, however, have not. Infamous end is then received in the nazi wehrmacht, all available moždířů, including the museum of Vienna, used on the eastern front.

Achievements with 30.5 cm moždířem and expansion of the trench war provoked by the austrian command soon the interest on the happening of even greater caliber, designed, however, according to the same good principles. In the short time of only 9 months was created then a prototype 38 cm howitzer vz. 16 very good performance 740/459/15 000. At the front proved successful, and so Škoda produced by the end of the war, 11 more pieces. Especially interesting was the new way of transport, which did not have in other armies before it. The traction of the individual transport units of howitzers (they were 4 in total of a weight of 28 az 33 t) already wheeled tractor is not sufficient, and therefore, the austrian Daimler plants in the Viennese New City (belonged only to the sphere of influence of Skoda) have chosen at the initiative of its director, Ferd. Porsche benzinoelektrický drive. It was not perhaps the idea of a completely new, new but its application and implementation. The chassis of each gun unit had 8 wheels, propelled by one electric motor on the performance of the 15k. The current supplied generator car vz. 16 with a petrol engine of 150 ks.
The unit, which later in the ms. the army bore the designation "BE the train", she could move not only along the road (max. speed 14km/h), but after replacing the wheels and rail. The progressive concept of transport allowed the launchers completely unusual performances. After the narrow alpine roads such as around up to altitudes of about 1 600 m.

The same design then Škoda used also for 24 cm gun vz. 16, which, moreover, had also the same mortar bed and lafetu as the 38cm howitzer (exchange only the barrel with the cradle). Přl performance 215/750/26300 was the cadence the same. The excavation of the pit for the mortar bed lasted according to the nature of the soil 8 to 20 hours, in the rock, but also a 2 to 15 days — in that also has the major disadvantage of the location of the heavy company merged with škoda works in firing position. Self transfer to palebného position did not last, then no more than 6 to 8 hours and it was not to him the need nor the crane. By the end of the war at the front appeared only two pieces and one of them was set in France before the Verdunem.
In the czechoslovak army was the 24 cm gun nejmohutnějším piece. In the twenties, for us to consider also the introduction of the 38 cm howitzer, but into the arms of the have never gotten. In September 1939, but already the 24 cm gun did not belong among the most modern. Yet the nazi army, weak initially just in the heavy cannons, all six pieces of pouzila.

The heaviest gun, what Škoda for the first world war produced and which the austrian army push, was 35 cm gun d/45 on the performance of the 700/770/31 500. It was originally designed for the sea, to the arming of the new austro-Hungarian battleships, but their construction has already occurred. Due to the large size and weight could be an transported only by rail and to palebného status umísť'oval in a makeshift was coming to 100 t crane. This cumbersome stopgap, there were only 2 pieces.

The most powerful cannon for shooting the top group of angles was 42 cm howitzer vz. 16, later improved in the vz. 17 with the performance of the 1000/415/12700. Was originally established (in the years 1909 to 1913) as a stable coastal gun, which had one shot to destroy the battleship. Only when an existing piece was due to the lack of works of large calibre vymontován of coastal fortifications for war, the port of Pula and went in a makeshift lafetaci to the front. The coup was produced and applied to the other 8 pieces. Carrying is already a benzino-electric train, but in the six transport units. Vzdyť weighed in firing position 113 t! Even in 1940, bought the Italians from the Skoda car license for the production of mainly.
The only still existing of the specimen is exposed in the Military museum in Bucharest.

The last heavy gun, whose design of the Škoda ended in the main features even in the austrian era, was 21 cm moždíř vz. 18. Had to replace the totally outdated 24 cm moždíř vz. 98 and at the same time to fill the palpable gap between the 42 kg heavy with a 15 cm howitzer and 380 kg net, 30.5 cm mortars. The final test of this gun has the ms. the army in the r. 1920. In the thirties got hlavňový i ložišťový car wheels with tyres, so with the highest transport speed increased from 25 to 45 km/h. Mortars were then in number of 18 pieces in the arsenal of ms. the heavy artillery up to the r. 1939.

In the foreign, especially the French press, after the first world war still again there were reports that the Škoda works in Pilsen was the Germany dalekonosná guns intended for shelling Paris from a distance of 130 km. Because it was given to the besieged allied union with France on the matter of a particularly unwelcome, prošetřovalo her in the year 1921 also our MNO. It was found that the report on manufacturing in Pilsen incurred by Škoda supplied during the war a ferry Kruppovým arms part of the heavy main.
In 1918 the then Austria ordered in Pilsen two dalekonosná cannon of a similar type, as was "paris". Škoda works to build adaptations of the 12 finished 35 cm ship gun chief d/45, and the affix is then a new extended soul about the caliber of 21 cm and a length of d/100. Missiles should mit in advance drawn up the grooves for the lead in the barrel, otherwise, however, the design of the ammunition has not been resolved. Of the project was to coup dohotovena only the barrel.
The fates of most of the heavy works, which we mentioned, closed already revolutionized the year 1918; the progressive ideas put forward in their construction, transport, or preparation to fire, however, for the Škoda works in Pilsen become a guide in the development of the works of the greatest calibre as well as in other decades..
URL : https://www.armedconflicts.com/Tezka-dela-z-plzenske-Skodovky-t11832#38435Version : 0
Fantan 16 years ago
I give a synoptic table of the artillery, of which we are the majority in r. 1918 taken over and rozmnožené in r. 1939 turn handed over the Ádovi:. 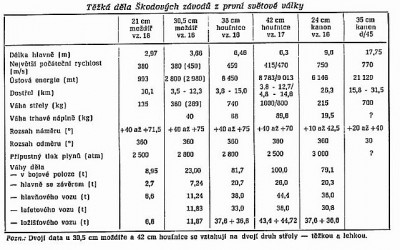 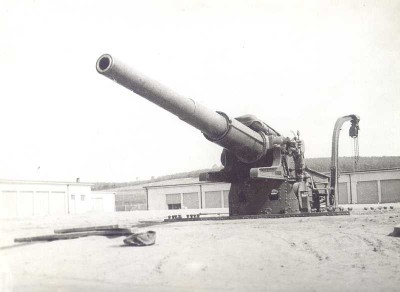