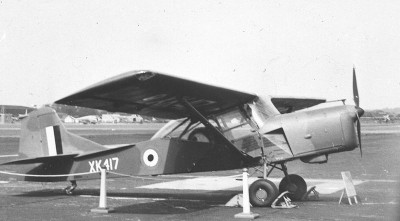 URL : https://www.armedconflicts.com/Auster-AOP-Mk-9-t118423#407489Version : 0
Aubi MOD 9 years ago
Compared to other Austerům was AOP.9 designed from the beginning as a military type. The prototype, WZ662, was completed almost a year after the end of production of the previous military observation version, AOP.6, and first flew in Rearsby 19. march 1954. The new Auster, while maintaining the concept of the original machines, but this was a completely new aircraft. He had a considerably more powerful engine, larger wing area, large flaps and the floor in the rear part of the cabin according to the needs of substitutable other equipment as needed. The mission of the AOP were usually carried out with a two-man crew, for coupling and light transport purposes could, however, be in the rear of the cab placed the third seat and the aircraft could serve for photographic survey, laying of cables etc. Thanks to the mechanization of the wing could AOP.9 start at 120 meters, land at 55 meters, in essence, for any at least a little bit of a flat surface.

AOP.9 was first shown at the exhibition of the Association of british aircraft manufacturers of the SBAC, which participated in the third built a machine WZ664. For the british air force, the total production of 145 machines, WZ662-XS238. The first machines were passed beginning in 1955, mostly on the base in the Middle Wallop, which housed the School of light aircraft. yet in 1955 they were Austery 656. squadron RAF deployed against the insurgency in Malaysia as part of operation Firedog, where in 1957 flown more than 143000 missions. In 1957 was established the army aviation corps, which has taken over the role of observation and liaison squadrons of the RAF, and the Austery of all versions were from the RAF transferred, in addition to several used for Short Range Operations Conversion Unit in the Odihamu.

In the framework of the Army Air Force participated in the Austery AOP.9 and several ageing AOP.6 and other military conflicts, 653. squadron AAC with them flying from, for example, zákadny in Falaise in Aden, and remained in service until 1966, when they were vyřzeny as the last of the observation machines with a fixed wing. Before they were in the light transport role replaced by de Havillandy Beaver. Probably the only two machines operated in the years 1957-67 the South african union, which also had about a dozen machines of previous versions, and in the years 1965-71 Royal hong kong auxiliary air force, which took over four machines from the British. Indians bought 35 machines still in 1955, their Austery have become the record holders what is life for, because they were delisted in the year 1981.

In the seventies of the 19th AOP.9 received into the british civil registry, and until recently in it still remained 14 of them, but only 3 still approved as letushopné. One of them is in the property of the Army Historic Aircraft Flight in the Middle Wallop..
URL : https://www.armedconflicts.com/Auster-AOP-Mk-9-t118423#407495Version : 0
Aubi MOD 9 years ago