Notes to the motor Rolls-Royce Goshawk


Engine Rolls-Royce Goshawk was from 1933 offered the british Ministry of aviation as a possible power unit. This engine was created to further the development of the engine Rolls-Royce Kestrel IV. It was a v-supercharged engine with a cubic capacity of 21.25 liters. Yet it would not be anything special, that it has quite fundamentally different, was the way his cooling, which motoráři Rolls-Royce chose - it was the condensation cooling.

Condensing engine cooling brings the following benefits:
1. the cooling circuit is cooled by a smaller amount of cooling liquid is used a higher absorption of heat during the change of state of matter - the water turns to steam.
2. pass out dimensional and material heat exchangers (radiator fluid), the aeroplane may be designed as aerodynamically superior.

The disadvantages are obvious - the size of the condensation cooler is significant, the aircraft is most often used wings or their parts, their inner space has been sealed, the surface of the wings was cooled bypassing through the air and on their inner side of the wing causing the condensation of the steam, the condensate was subsequently sucked out and used again to cool the engine.
1. The interior space must always be tight, it was the pressure relief the cooling system - a shot in the wings means discarding - or in the best case, the limitations of cooling, if the damaged part of the quick disconnect.
2. Condensing cooling shall be fully functional in all modes of flight, maneuvers, especially the years on the back and overload the positive and negative.

Engine Goshawk was the ministry offered primarily in fighter aircraft, however, two disadvantages reflected in the full extent. The ministry of aviation issued a specification F.7/30, in which it specifically requested that the design office proposed fighter aircraft powered by the engines of the RR Goshawk. On the basis of these directives was built a few prototypes of fighter aircraft, but none has been adopted into armaments, such as the company Hawker built a prototype fighter biplane labeled as Hawker P.In.3 and it's completely in your direction, the prototype was subsequently compared with the prototype Gloster Gladiatoru. Hawker had good flight characteristics, but admitted he wasn't. Condensing cooler were in the top wing. Use Goshawku as a propulsion unit for fighter aircraft was rejected, in the framework of objectivity I must add that not always been to blame the engine, some prototypes were downright bad and incapable of flight, e.g., Blackburn F.3.

Rolls-Royce Goshawk was also given in the directive F.9/32, according to which it Hampden, Whitley and Wellington, but here not even on the drawing up of the project with these engines.

With these engines flew without a doubt the longest flying boat Short S.18 Knuckleduster, which was built on the základš directive of the R.24/31. Powered by was a pair of the most powerful versions of the Goshawků, which was a version of the VIII, their performance managed to drive up to 578 kW (775 hp) Condensing chillers were in nástavbách above the motor nacelles (passed out so the advantage of aerodynamic cleanliness), but the inside of the wings were filled with fuel tanks. The aircraft was tested from 30, November 1933 to September 1938, tests were carried out primarily by the Marine Aircraft Experimental Establishment (IAEA), and for a time was the service deployed at the 209. squadron RAF. 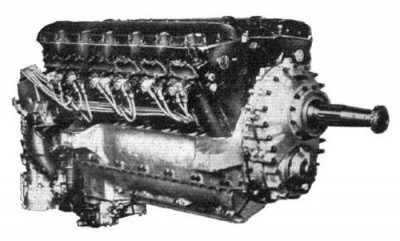