Weapon system Damage, produced a joint Stock company, formerly the škoda works, Plzeň, modification of a light cannon vz. 15 caliber 8 cm.
The prototype was tested during the year 1916 and in the following year introduced into service in Czechoslovakia was produced from January 1919 to the end of the year 1921, and several pieces were produced even in the years of 1924 to 1925 and 1937 and 1938 due to the unification of artillery weaponry in the individual regiments. At the same time, occurred in the twenties, during guarantee inspections and repairs to several adaptation and modernization interventions.
The gun was equipped with a steel main, a horizontal wedge in conclusion, liquid zákluzovou brake and zpruhovým vratníkem, the barrel was placed on the chobotové a post with a shield.
Cannon to allow shooting the top and the bottom group of angles, transported to hipicky (šestispřeží) along with the limber, where applicable, was as a whole and with the service loaded on the artillery car vz. 24 or artillery car vz. 29.
In addition to the cannons of war production received by the different light artillery regiments still further to almost 150 pieces, so that the weapon formed, along with a lightweight howitzer vz. 14/19 caliber 10 cm, armament divisního artillery until the mid-thirties, when it was gradually replaced by a light cannon vz. 30 caliber 8 cm. 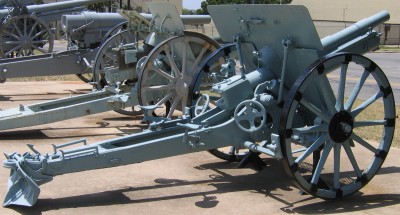