10th Battle of the Isonzo

URL : https://www.valka.cz/10-bitva-na-Soci-Isonzu-1917-t123906#421756Version : 0
Karel Oktábec MOD 9 years ago
Due to their inability to achieve success in the prestigious section of South Tyrol, focused to the Italian army once again on the terstský the direction of sochi's queue. After a five-day artillery preparation broke through the Italian units in tříkilometrovém section of the austro-Hungarian position and after two days of fighting had advanced to the Kostanjevici, distant as the crow flies 12 miles from the starting line of the first sochi's offensive. Here is the austro-Hungarian counterattacks stopped and forced to a partial retreat. The italians lost over 16,000 men, the Austrians 11 000... 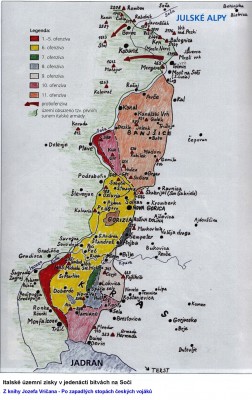 "... The chef Dalmatinac gave us an entire loaf of bread, a few pieces of smoked meat and a cup of wine. It was really bad, wasn't hope that someone else returned.

We got to taste the food and even to mind didn't come to the council of our commanders, that it is better to be hungry. When we get a wound to the abdomen, the better they will heal. Who would of heeded. Cast I the wine in the bottle, and the rest, about ½ pint, slowly dopíjel.

Spikelet and Boy drink by thirst, and they were drunk. Even I was not well. Bold, smoked, wine and bread there was nothing for the famished stomach. With misery I odlezl aside and soon I got better. Nasty sour taste I washed down with wine. The world of me spun and all I was completely indifferent. Shells were whistling over our gotta tidy the den into a hillside above us, every moment are raking in the clods and stones. I, however, wanted to sleep.

From the trenches, from whence we recently came, came dashing soldier. "Where is the commando, the italians are in the trenches" enough to tell me, and rolled into the cavern. From the just based on our leutnant Paul and right away he saw me. "Ah, Pánek out. Ought to, kako?“

He learned a few words of all the languages that get by with every. Even I didn't have time to answer, and he's a soldier, reported what's new. Paul was in an instant in readiness. He roared into the cavern "Alles heraus, my vanko, bayonet auf."

For a moment he gathered about thirty people and was in charge. "Pánek first, drugi ajnc apfalen for him." An order is an order. I never thought that I'll be sometimes and somewhere the only and the highest batches, I - gefreiter. I took hold of the pile lying rifles one and wanted to deploy the bayonet. That didn't work, the tooth was ripped off.

I slipped a cartridge into the rifle, but the pen was ulomeno. I put only one bullet into the barrel and fired. Leutnant me caught up with orders: "Go back, and who doesn't want to go, immediately shot!" The order was heard by all and the line has moved. Many but thirty wasn't. A few of them as always in the confusion of the lost. I felt in the whole body, that is approaching a decision: either to captivity or wounded.

The series is spread in the úžlabince, it seemed to me that the people is too little. I'm going to last. Paul says, "right, vorwärts" and a number of scrambling out into the stráňky about ten feet high. At the top is not visible even on three steps. You will hear more German Paul yell at and go forward, let's get each other in a cloud of smoke and dust.

I fell to the garnet of the funnel almost on the head and I didn't want to get up. 'Hooray' I neozývalo, just a horrible scream of shells, shrapnel and mines, all shrouded in polotmou. It crossed my mind a few questions. I may be relatively safe, but where to now? As it turned out in the front? I get out of this hell well? Persistently impose yourself on me the idea that me the last time quietly followed. Shoot, as others have done it, no matter what he wants.

Mechanically, and without the will of the working brain. The wound must be clean – then through the bread. An open bread finds itself in a flash before the main. The entire I'm sorry, but I don't have a knife to cut. I'm thinking of which finger to sacrifice and how far. It's a shame – blown big piece, it would at the craft miss. Discussing your work. Most skip the last article left ring finger. Carefully surveying the water for it to turn out according to assumptions and I'm trying to pull the trigger. It's not that, something there bothers you. I'm looking to pull the trigger, oh – clay there rushed. Removing the dirt, but the left hand still prints the bread to the mouth of the barrel. Finally, clay is gone, I want to see if the hand I'm holding correctly, when this trigger slips and slams the morning. Even I too heard in the turmoil. Fingers zabrněly, but nothing more, the next charge I don't have.

I raised my hand and watched. Worth a shot, but the middle finger and somewhere in the joint. But the finger is whole and I can move him. The blood drips more and more, I hold my hand up to be redder. I didn't notice what is happening around, I've been working on their rescue from the front and in the mild intoxication started to be fun. I've shed blood for the emperor of the lord, he acted most bravely and so now farewell, fronto...