After the end of World War II , during which the entire Korean Peninsula was under the rule of the Japanese occupiers, there was a political and territorial division of this seemingly insignificant East Asian state. The boundaries of the newly created territories were to be 38 parallels, which were to separate North Korea - the bastion of the Stalinist regime and South Korea - a child raised by the western oriented states. The reason for the division was simple. While the southern part of Korea ( today's South Korea ) was “ cleansed"From fascist armies by Allied troops, their northern neighbors had the honor of being liberated by the Red Army Red Army and Chinese paramilitary units. As a result, two completely ideologically different systems began to emerge, which were soon to be the cause of the change in the nature of the Cold War to " hot ".

The post-war period was characterized by a strong expansion of communist structures into all possible parts of the world. Even North Korea has not escaped strong support from the countries of the future Warsaw Pact, which are deeply anchored in their infrastructures. At the time, the United States was facing a severe economic downturn caused by astronomical spending on the European battlefield of World War II . However, the US could not afford to relax in the coming Cold War, sometimes nicknamed the " Red Button Wars " ( derived from atomic-warhead ballistic missile launchers ). There is a time of expectation and uncertainty about what the next weeks will bring…

After consolidating relations with the Japanese, the United States realized that if it wanted to remain a world power, it must use its full potential to stop the penetration of the communist plague and to stand up to it. East Asia, the dangerous host of the Stalinist plague, was thus to become a decisive point of conflict between the two world ideologies.

The so-called Dulles's pyramid thesis ( if it falls victim to another country's communist campaign, triggers an avalanche response that would have far-reaching consequences for global stability ) formulated by one of the high-ranking statesmen around the US President, raised great concern about possible communist expansion and only increased the determination of the American public to switch peaceful methods of action to far more effective methods. Another potential victim of the Russian Admiralty gradually emerged from the CIA's intelligence statement. She was to become South Korea.

The United States has responded to the new situation with direct economic support from South Korea and, in particular, by " stabilizing local government ." This step meant nothing more than the establishment of a so-called puppet government (a term taken from communist propaganda ), which was permitted by any directives and regulations of the United States. Economic support was soon expanded to include military support provided by US advisers, who acted as the main coordinators of South Korean military training, and in particular the endless supply of weapons and advanced military technology.

At dawn on June 25, 1950, there was a ( relatively ) unexpected invasion of the North Korean regular army across the 38th parallel in numbers in excess of twice South Korea's military potential. Five years after the end of World War II , a conflict arises again, which almost started the Third War. The massive onslaught, overpowering the North Korean army, which was only an extended hand of the Stalinist generals, dispersed any resistance from their opponents, nearly forcing South Korea to surrender. Eventually, all army and government units retreated to the southeastern part of the peninsula, where they were to remain until the arrival of " God's Salvation ." 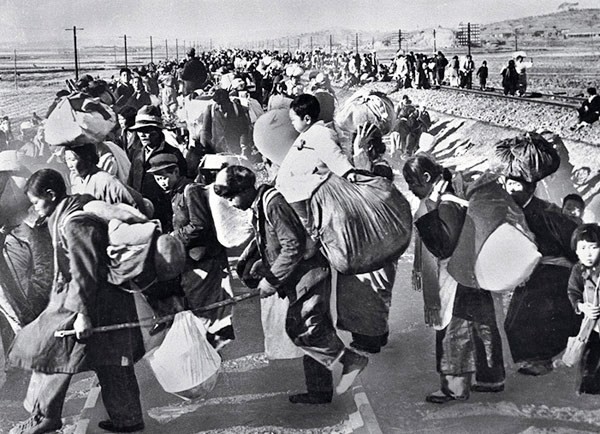 Hundreds of thousands of South Koreans fled south in the mid-1950s after an invasion by the North Korean army.
commons.wikimedia.org

Instead of " God's Salvation ", American land forces, landed by retaliatory strikes by bombers, took refuge at Japanese airports and aircraft carriers. The extensive US mobilization was preceded by a tumultuous meeting of the UN Security Council, which reaffirmed the North Korean government's status as an aggressor and called on its members to take collective action to save democratic values ​​in this part of East Asia. The Soviet Union boycotted the United Nations action by not participating in key negotiations, mainly because Communist China was uncompromisingly excluded from the meeting. Allied troops, composed mainly of the United States military, now had their hands free to proceed with a " more direct " support of the South Korean people.

At that moment, the situation took a new direction. Like the South Koreans on June 25, the North Korean army now had to face a sudden, well-led attack at the rear of its own ranks. General MacArthur , the commander of the ground forces in East Asia, not only managed to break through, but also to drive the North Korean army where the war originally began - to the 38th parallel. US President Harry Trumanhowever, he ordered the continuation of the fighting, a direct invasion of the DPRK. He saw in his decision the naive hope that he would be able to disperse the entire Bolshevik machinery by conquering North Korea, hold free elections and unite the two warring countries to establish a peaceful and prosperous society. However, the progress of the invading Allied troops in the early stages of the battle did not indicate the unavailability of Truman's dream. Army units continued to benefit from the moment of surprise and the disproportionate superiority that " rolled " the DPRK army day by day . The role of aggressors and defenders simply changed.

After three months of war, in mid-October 1950, the main North Korean center - Pyongyang - was conquered . The crushed and exhausted North Korean army completely collapsed and took refuge in the last possible refuge in the northernmost place - on the border with China, in the Yalu River basin. General MacArthur saw the end of the war in close proximity and promised the soldiers to return to their homeland before the Christmas holidays. However, this temporary intoxication by winning was soon to be replaced by a terrifying nightmare. The United States was soon to recognize the wrath of the entire Bolshevik machinery. 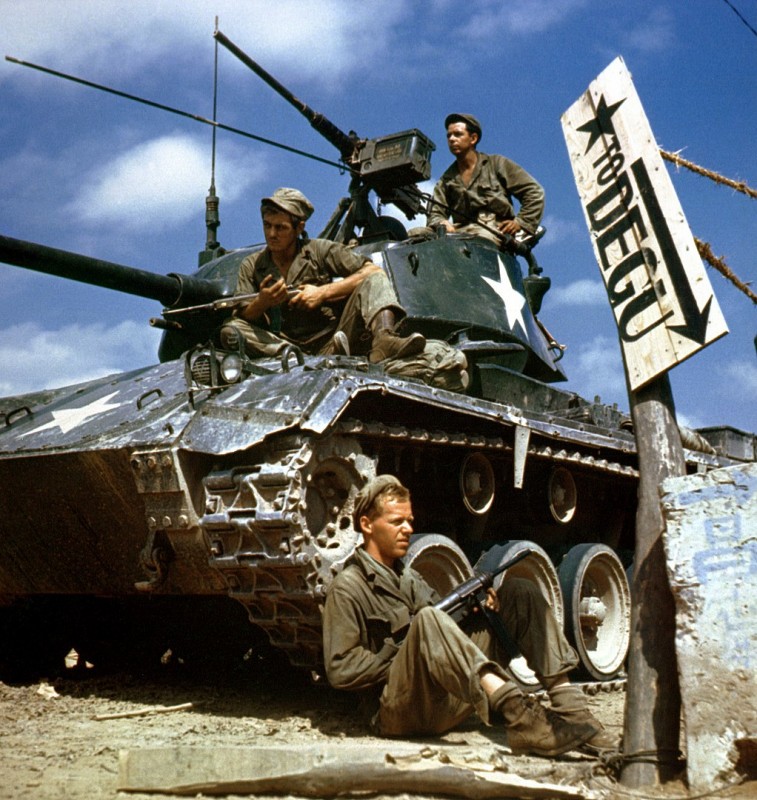 The crew of the M-24 tank at the Nakdong River, August 1950
commons.wikimedia.org

J. V. Stalin responded to the total failure of his North Korean comrades with a massive military involvement in the whole conflict, thus essentially becoming a kind of covert commander of the entire operation against the imperialist threat and thus strongly escalating the entire course of the war. China's strong involvement in the conflict, as a country with almost unlimited human resources, also marked another breakthrough in the Korean War. In the early spring of 1951, an almost unimaginable one and a quarter million Chinese, equipped with Russian technology, intervened in the fighting, who were also airlifted by hundreds of elite Soviet pilots. Of course, everything was subject to great secrecy - the Soviets flew in Chinese uniforms and machines, Chinese troops were considered voluntary legions.

American troops were thus forced to abandon their strategic positions under the weight of disproportionate superiority and retreat to the enemy just as the DPRK's military troops once did. At this stage, the war took on the most formidable form since the beginning of the conflict. She was ruthless, demoralizing, cruel and long. Subsequent statements revealed that President Truman was first considering the use of atomic warhead ballistic missiles , which were paradoxically hidden in warehouses in Okinawa, Japan . 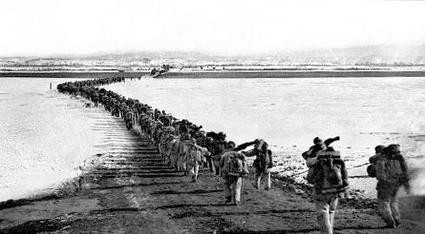 After a long period of strong offensives, US troops were pushed back to the 38th parallel, but were still unable to face the still fresh Chinese sends. North Korea was again humiliated and the communist leaders longed again for an invasion of the south. Their desires were heard and the South Korean army, along with the US, was pushed back to the very south of the peninsula after the conquest of Seoul. President Truman's successor, Dwight Eisenhower, was even more tempted to use weapons of mass destruction to stop further bloodshed. Only a coincidence prevented their use, which would certainly ultimately mean the official entry of the People's Republic of China and the Soviet Union into World War III.

Instead, he agreed to further reinforcements of US contingents to South Asia. However, the communist onslaught slowly faded. Exhausted Chinese and North Korean troops from previous fighting and, conversely, fresh American forces hastened the early arrival of another turnaround in the war. Allied troops soon managed to consolidate again and take an active stance in the war again. Communist military forces soon retreated, Seoul was liberated again. The nearly year-long retreat of Chinese People's Army and North Korea has stopped again where the war originally began - on the 38th parallel. However, both powers no longer had enough material or military forces for further armed attacks. The lingering conflict had a strong impact on their fading economy. There was no longer the means on both sides to continue the war. The Korean War thus became a strong passivity.

At the initiative of Soviet leaders, there were several peace meetings between the two opposing parties - North and South Korea. On 27 June 1953, a ceasefire agreement ( peace, not peace ) emerged from them , which is still in force today.

The Korean War revealed the Achilles heel of the then US military forces. At the beginning of the conflict, the United States struggled with technological backwardness compared to its adversaries, as it did not carry out a major reorganization in its military armament from the end of World War II to the beginning of the Korean War. It often happened that they used outdated types of weapon systems used during World War II in combat missions, which did not fully meet the requirements and needs of this war. 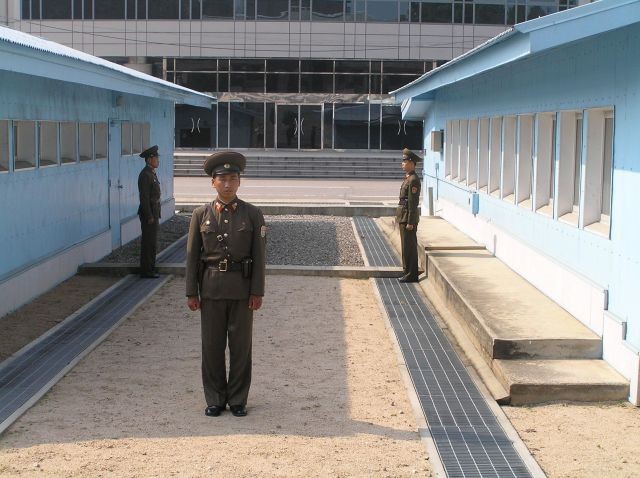 DMZ seen from the north
commons.wikimedia.org