The Danish story of the Star of David

The stories of the Jews during the Second world war come often "completely known" and examined to the smallest detail. The deportation and systematic murder of the Jews were enforced by the Nazis, mostly without resistance, perhaps except for a few brave individuals who tried to help the Jews on their own. Yet there is a country that managed defeat the Nazis in the fight for the lives of its Jews. That country is Denmark.

Denmark despite the non-aggression pact of 1939 was another of a series of victims of German aggression - it was decided already at the end of February 1940 that Denmark will be occupied, in the framework of the plan of the attack on Norway. This attack aimed to protect the iron ore imports and to obtain naval and air bases in Norway for attacks against the United Kingdom.

In 4:15 in the morning of 9. April 1940 the German units crossed the Danish border. At the same time, the German warships entered the harbour of the Danish capital, Copenhagen, and began to disembark the German soldiers. The Danish army, small in the numbers and with outdated equipment, didn't have many chances to face advanced military machine of Germany, and so shortly after the start of the attack, the Danish government capitulated while attempting to negotiate at least some conditions. During the fighting fell less than two dozen soldiers. Among the troops, which fought the Nazi invasion, before the order came to stop the fighting, also were the members of the Copenhagen Royal Guard.

Military events took place so quickly that many Danes woke up the next morning, without notice, that Denmark became another bite of expanding Nazi Germany. Danish ports and airports have become places of concentration of forces against Norway, which bravely, but to no avail fought until the beginning of June 1940. Then it was quickly over for the last of the western powers on the continent - France.

Short military resistance and reasonable surrender terms earned the Danes the possibility to retain a certain autonomy, its government and king, Christian X as a leader. This charismatic ruler was King of Denmark from 1912, was giving them hope. The Germans did guarantee not to interfere in the internal affairs of Denmark and the government of the social democrats and liberal coalition. The Danes had to provide the production of its industry and agriculture. After the German attack on the Soviet Union in June 1941 the request came for the extradition of the Danish communists, and this claim was granted. The Danish ambassador in London and  Washington have stated that they no longer remain accountable to the, by Germans controlled, government in Copenhagen and that they will act only on behalf of the "free Denmark". The Danes formed, like many other nations, including the Czechs and Slovaks, numerous volunteer units in the territory of Great Britain and engaged in a multinational battle against nazism and fascism in Europe.

In addition to non-interference in the internal affairs, Denmark was able, at least for some time, to avoid a significant issue - the so-called final solution of the Jewish question - the deportation and extermination of the Jewish population, which took place in the rest of occupied Europe with bloody efficiency. In Denmark there lived at the beginning of the second world war around 6000 Danish Jews, other 1800 of them came looking for a new home after the nazi pogroms in Germany.

Let us now return to the royal palace in Copenhagen, to King Christian X. Regardless of the German occupation the king was riding his horse to the streets of Copenhagen every day, unarmed and without security guards, a noble symbol, so contrasting with that screaming Fuhrer, who thundered from the heart of the Nazi empire. Shortly after the occupation, a legend appeared, describing the situation around the Danish Jews - King Christian X. reportedly said, that if just one of his citizens will have to wear a yellow star of David, then he will wear it too. This story is just a legend, Danish Jews did not have to wear the Star of David as an indication of their origin and faith, the King did not say anything like that but it illustrates the feelings of the Danes and the general attitude towards the German invaders. "In Denmark, there is no Jewish question", said the Danish foreign minister Erik Scavenius to Herman Goering in 1941.

But the war went on, the Germans, winning so far, met the first setbacks. In the winter of 1941, their troops stopped in sight of Moscow, in 1942 a disastrous failure at Stalingrad signalled that Germany had reached its peak and that the tables have turned. Overwhelming battle of Kursk in 1943 took from Germany reins of the campaign on the Eastern front, the German High Command was concerned of opening a second front in France, the Mediterranean, or of the allied invasion of Jutland - Denmark. The Danes, reinforced by these signals began to effectively sabotage pro-german production, the resistance connected to the British SOE launched their resistance actions. Illegally printed publications were circulated among the people. The political elite has not escaped criticism for collaborating with Germany, in the nation there were increasing tensions. Strikes and social unrest happened daily. On 29. August 1943 the Germans dissolved the Danish government and issued the martial law, German SS general Werner Best takes control.

He immediately began with the internment of the Jewish population of Denmark. The Germans refused the questions of the Danish representatives as unfounded, but the arrest of the Jews started in full in the night from 1st to 2nd of October 1943, dozens of Jews were arrested, many more fled and hid all over Denmark. Already on 28. September 1943 Werner Best received an order from Berlin to arrest and transport the Danish Jews. According to the official version it was Best, who informed the German diplomat in Copenhagen and an agent of the Abwehr G. F. Duckwitz. Duckwitz had contacts to the Danish social democracy and the plan for the deportation of Danish Jews soon found the right ears. The drama, that can compete with other heroic stories of this unfortunate war, begins. Duckwitz went to Stockholm to meet the social-democratic prime minister of Sweden, Per Hansonn, and Hansonn agrees with the move of the endangered Danish Jews to Sweden. 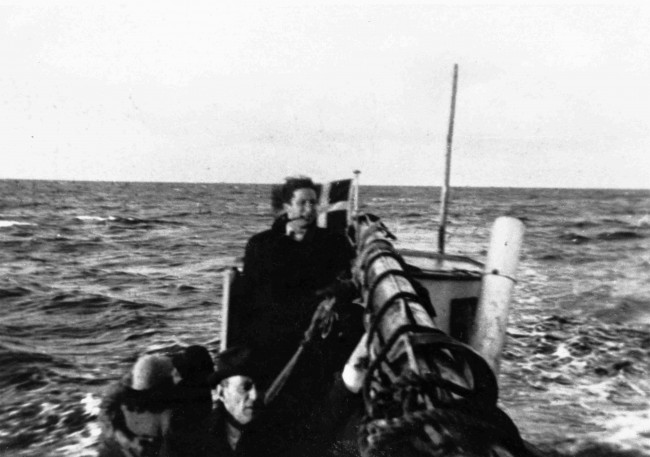 The information spread of the synagogues, among the friends, in commercial communications and among the citizens who want to help. The people of Denmark, you are in danger! Shelters, food, transportation, everything is directed towards the coast. Two thousand persons will gradually find shelter and contacts in the Copenhagen hospital Bispebjerg. Denmark police and coastal guards stand on the side of the refugees. Even some of the German soldiers, perhaps from a certain epiphany, accept bribes and are turning their eyes elsewhere. Attempts to overcome hardly a few kilometres between Denmark and Sweden on kayaks, crowded dinghy, and similar vessels has led to several tragic cases, the transport will eventually engage all of the available ships. Carriage is not free, some of the fishermen initially profited on the transit of refugees, but it eventually came to consolidating a price - the richer Jews were paying more than the poor so that everyone had the opportunity to leave Denmark this way. Additional funds were provided by the Danish organisations, businesses and private individuals. On 5. October, however, the Gestapo occupied the port Gilleleje, from which ships with refugees sailed to Sweden. To continue with this operation was not possible. 80 Jews were arrested and later transported to the ghetto in Terezin. The Danish police maintained solidarity with the refugees and when the Gestapo called for help due to ignorance of the area, the Danish police refused. Sadly, in the end, a tip led the Gestapo to the church, where the refugees were hiding.

During these three weeks till the capture of the port of Gilleleje some 7,200 Jews and other 700 people at risk managed to get to Sweden, which meant a huge success and the bitter defeat of Germany in the campaign against the Danish Jews. The Germans arrested 481 Jews, particularly the elderly and the sick, who were deported to Terezin, but based on the protest of the Danish representatives, these were never deported to the extermination camp in Auschwitz. Many of them were able to be transferred to Sweden before the end of the war through negotiation with the German authorities. In Sweden, 45 camps were established and the Danish schools were in major Swedish cities. The people involved in the work in Sweden, Jewish artists contributing to cultural life ... War rampage will continue for more than a year.

Denmark was under German control until the end of the war. Cooperation was limited to a minimum, resistance organizations focus on the German institutions and enterprises. The death sentences were German retaliation, so well known from the rest of occupied Europe, and so by the end of the second world war about 850 Danish fighters lost their lives. Another 900 civilians died during the war operations, one hundred Danish soldiers died in the ranks of the allied units, 1850 sailors died at sea, mostly as victims of submarine warfare.

On 5th of May, 1945 the guns of the Second world war went silent in Denmark - the country was liberated by the British forces of Field Marshal Montgomery and the units of the Soviet Union. Denmark could finally breathe freely. After many weeks it was also time to bring the Danish Jews home from exile. Unlike the Jewish property in Poland or Germany the Danish property wasn't almost touched, yet it happened that the new owners of the apartments after the escaped Jews refused to return them, Nazi antisemitism also made the Danish Jews something that they had not been yet - a separate and visible group of people. Yet Denmark tried to return these people home, state employees were recruited back to work and many even have received a salary for the time they were forced to spend outside of Denmark. The Jews themselves have tried to wash off the sticker peculiarities and therefore, although some decided to go to Israel, most stayed and tried to assimilate and fit back into Danish society, to a time before the year 1943, where they always belonged.

Denmark finally swept away the last doubts about the cooperation with the Nazi regime, when during one of its first meetings in July 1945, the Danish parliament has passed the emergency law on monetary reform and declared all the banknotes to be invalid. The law went into effect on Friday 20th of July, and all the banknotes not registered till the 30th of July have lost their value. Everyone could change 100 Danish kroner without any proof and 500 crowns over a written statement about their origin. Any higher amount must be reviewed by the financial authorities if they were not the profit obtained by cooperation with Germany.

Back to the present - not long ago, the Danish prime minister Anders Fogh Rasmussen on the occasion of the 60. anniversary of the liberation of their country officially apologized for the deportation of the Jews, which were not able to be saved by above mentioned bold actions.

I think that this text clearly illustrates the character with which nation of five million, adjacent to the expanding and aggressive Nazi regime was able to deal with threats to itself and its citizens. Even in so small numbers, Denmark could stand with great courage in mortal danger and at a critical time it was able to save the lives of thousands. For me, a hitherto unknown chapter of world war two brings new lessons and faith in good, which managed to defeat the vicious Nazi regime in its very foundation.