The Batu Maung Artillery Fortress was built by the British in the jungle on the hill of the same name. It has never been used in combat, nor have many similar fortresses around the world. In addition to the money of the " taxpayers ", there were also the lives of ordinary people who died during the construction and unnecessarily. The Japanese occupied Malaysia in two months by attacking Thailand and not, as British planners had predicted, by attacking from the sea.

The island of Penang lies on the west coast of the northern part of mainland Malaysia. On the southeast coast of Penang on the jungle-covered hill of Batu Maung, the British built a concrete artillery fortress in the 1930s.

Penang Island is only about 2.5 km from the mainland. The fort was built to protect the island from invasion while protecting access to the Strait of Melaka and the port of Penang from the south.

The purpose of the fortress was only defensive, to repel the naval invasion. The British at the time were convinced that the enemy " Japan " would attack from the sea. They also fortified Singapore for defense from the sea.

The fortress consists of surface concrete casemates for cannons and several concrete bunkers for light machine guns. Only the command and communications center and ammunition depot were underground. The ammunition depot was built nine meters underground with a number of connecting tunnels. Everything is resistant to enemy fire.

There was also an observation artillery tower. To this end, dormitories were built, several kitchens separately for British ( white-Christian units ), for Malaysian units ( Muslim ) and Indian units ( Hindu ), toilets and washrooms ( also extra for individual nations in arms ), warehouses and infirmaries. 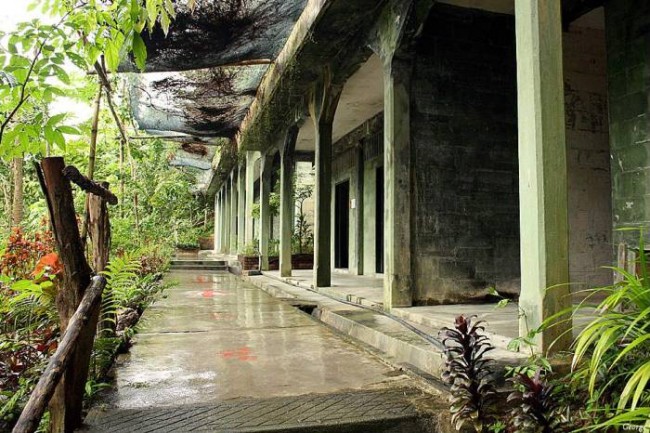 Light bunkers or machine gun nests were built in several places along parts of the coast and access to the fortress.

The whole fortress covered an area of about 8 ha ( 80,000 m2 ). It is located on both sides of Batu Maung Hill. Cannons in solid concrete casemates were deployed on the sea side. An underground command post and ammunition depots, a tower for the observation post and a water tank were built at the top of the hill. On the far side of the hill there are hostels and other facilities ( kitchens, warehouses, infirmaries, etc. ). Once the fort was completed, it was occupied by British, Indian - Sikhs and Malaysian soldiers. 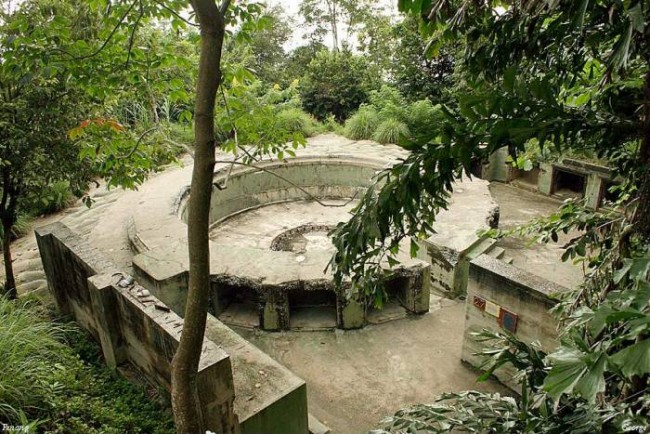 One of the two positions of 152mm guns

Furthermore, part of the 2nd Battalion Anti-Aircraft Indian Artillery ( 2nd Battalion of the Indian Anti-Aircraft Artillery), armed with 40mm Bofors cannons, was deployed here. However, most anti-aircraft guns were designed to protect Butterworth Field Airport 1) just a few kilometers from the fort.

A small unit with a searchlight was also located here.

The artillery fort at Batu Maung, after falling into the hands of the Japanese army, was turned into a prison and torture chamber, where executions took place.

After the surrender of Japan in August 1945 in Malaysia, the fortress was left to the jungle. Only children came here to play.It was not until the mid-1990s that a few enthusiasts cut out the surrounding vegetation, drove venomous snakes out of former military hostels and artillery positions, and opened up the fort to Malaysian tourists and those few fools in Europe who set out to learn history in the heat, rain and damp. 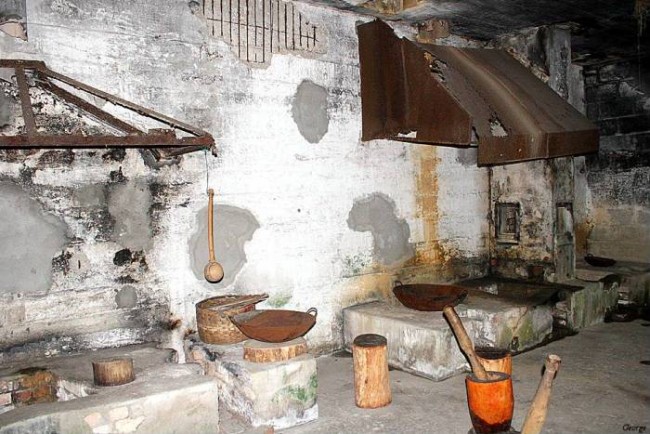 One of the kitchens

Note:
1) Butterworth Airport was part of the British defense plan in October 1941 as the Royal Air Force Station. During the Battle of Malaysia, the air base suffered damage caused by air bombing by the Japanese Navy G3M and Mitsubishi G4M aircraft from the airports near Saigon . The obsolete Brewster Buffalo fighters deployed here attacked the enemy several times, but the accompanying Mitsubishi A6M Zero shot them down during several of these attacks.

At the time of the invasion of Malaysia by Japan, the garrison commanded the fort Brigadier General CA Lyon.

The crew consisted of the following units:

During the Japanese occupation, the port of Penang also served as a German naval base in the Far East. Specifically, the 33rd Submarine Fleet ( 33rd Unterseebootsflottille ). Lt. Capt. Wilhelm Dommes became the first commander of a German U-Boat base in Asia.

The port of Penang was also used by Italian submarines and ships operating in the Indian Ocean.

December 1941 in Malaysia and Southeast Asia

General Tomojuki Yamashita's 25th Army, assigned to occupy southern Siam and Malaysia, began landing on the eastern beaches of southern Siam near Singora and Pattani and in northern Malaysia near Kota Bharu in the morning hours of December 8, 1941. The Japanese landing units at Kota Bharu were welcomed by the firing of Indian troops from the 8th Indian Brigade of the 9th Indian Division.

On December 9, China declares war on Germany and Italy.

From Siam, Japanese troops headed for Malaysia, crossed the Perak River and made contact with invading troops from Kota Bahru and prepared to strike the British line of defense at Jitra. The position at Jitra was defended by the Indian 11th Division under the command of Brigadier General Murray-Lyon.

On December 11, the Japanese navy carried out a raid on the city of Georgetown on the island of Penang and caused a number of damages. As a result of the raid, most of the population left the city.

( The European population was evacuated before the impending attack. The rest of the " Asian nationality " population of the Malays, Chinese and Indians remained or hid in the jungle inland. )

The air defenses, including the RAF, put up little resistance.

The British garrison in Hong Kong began to move from the mainland to the island of Hong Kong.As a result of attacks by the Japanese Air Force and rumors, many soldiers deserted.

The US garrison in Beijing is forced to surrender to the Japanese.

On December 13, the British governor in Hong Kong rejects the Japanese request for surrender. British troops at the southern tip of Burma are beginning to retreat north toward Rangoon.

On December 14, Thailand formally formed an alliance with Japan.

On December 15, Japanese troops relocate to southern Burma. Japanese artillery and air force bomb Hong Kong in an effort to undermine the morale of the defenders.

On December 17, Japanese troops landed on small boats on Penang Island without encountering resistance. In response to the easy occupation of the island, the Japanese began looting and committing the first massacres and violence against the civilian population. Many locals fled inland to escape Japanese atrocities.

Among other things, the Japanese were left with a functioning radio station, which the Japanese used in radio broadcasting for Malaysia and brought even more confusion among British troops.

On December 18, Japanese troops land on the island of Hong Kong.

On December 23, Japanese bombers bomb Rangoon for the first time. They suffered heavy losses from the RAF, but their attack destroyed many houses and caused considerable damage to the docks.

The British, due to the Japanese bypass capabilities and their inability to face them, had to retreat further and further south. The Japanese seized trucks, armored vehicles, cannons, ammunition and food, which the British left in their positions.

On January 31, 1942 , the Japanese stood on the shores of the Johor Strait, separating the Malay Peninsula from the island of Singapore. Malaysia has been conquered, now it's Singapore's turn.

On February 15, 1942, the Chief of Defense of Singapore, General Percival, surrendered.

It was not until three and a half years later in August 1945 that the Japanese capitulated in Malaysia.