After the destruction of the PKZ-1 propulsion unit, engineer Žurovec decided to proceed with the construction of the observation platform according to Petróczi's original design. In the meantime, large-diameter propellers were available - the results of engineer Kármán's work at the Propeller Test Institute. There was no obstacle to further development of the helicopter platform.

Engineer Žurovec reportedly began design work in November 1917, which was undoubtedly preceded by a consideration of the overall concept. Unlike the first version of the SFF (referring to the PKZ-1), the construction of Zhurovec's machine was not covered by state funds. However, funds were obtained from the Hungarian Bank and the large Dr. Lipták & Co. AG in Pestszentlörincz near Budapest, employing around 4,000 people. The company set up a special design department and entrusted its management to Ing. Vilém Žurovec.

Propellers were available, but a light electric motor with the necessary specific power was missing. Therefore, Ing. Žurovec had to use other power units. The choice fell on the seven-cylinder Gnôme Monosoupape rotary engines with an output of 100 hp, or on their licensed Oberursel U.I versions produced by Steyer. They were later replaced by a more powerful nine-cylinder variant, the Oberursel UR.II (La Rhône 9J) with power increased to 110 hp. 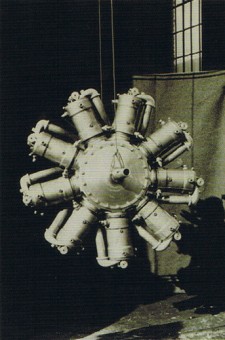 There were more powerful engines at the time, but these were preferentially allocated for frontline use. Ing. Žurovec assumed that rotary engines could do without additional cooling, but his assumption was not fulfilled. Therefore, experiments were made with water cooling, which is a completely unusual solution for rotary engines. 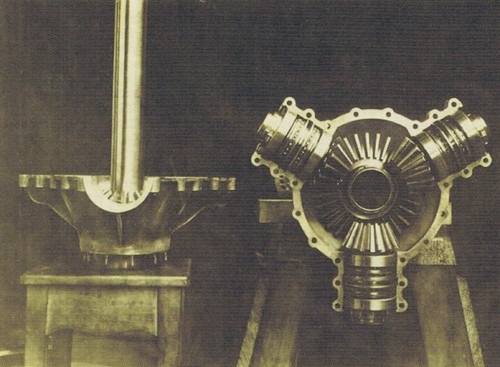 The PKZ-2 gearbox on the left is the plate wheel of the upper rotor, the shaft of which will go through the hollow shaft of the lower rotor (right), which is occupied by the cone wheels of the motors

The basis of the design of Zhurovets' machine, designated PKZ-2, was a central horizontally split gearbox housing, to which the spacer tubes were attached by flanges. At their ends were stirrups (above) and a flange (below) for attaching three "truck" beams, holding an angle of 120o. 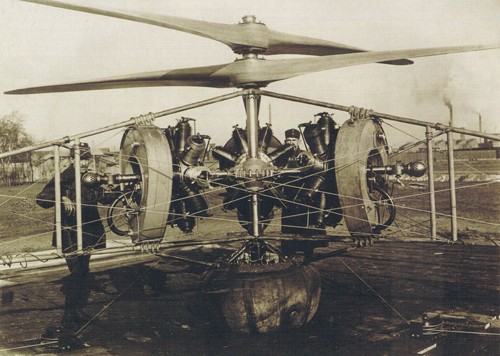 The three trusses were welded together from steel tubing. One engine with fuel and oil tanks and accessories was anchored in each. The outer parts of the spars could be easily dismantled for transport, just behind the tanks. The tubes were fitted with lug nuts for this purpose. Lashing ropes were attached to the ends of the beams. The correct relative angles of the beams were defined by steel cables with turnbuckles. 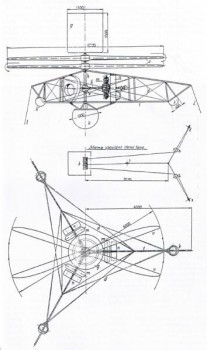 The motors, via short connecting shafts, drove the bevel gears housed in a central, gearbox. The bevel wheels engaged a pair of disc wheels, ensuring identical speed and counter-rotation of the two propellers. The lower disc wheel drove the upper propeller via a hollow shaft. The hollow drive shaft of the lower rotor was threaded onto the shaft of the upper rotor. An axle anchored to the frame ran through the interior, on which was a fixed flange for a 1.5 m high observer nacelle with a bottom diameter of 1.3 m.

The rotor was mounted on a 1.5 m high observer nacelle.

The landing gear consisted of a central inflatable bag, 1 m in diameter, and three buffers, 0.4 m in diameter, located almost at the end of the trusses. The central bag had a pressure relief valve which prevented it from rupturing on a violent impact. It was inflated by a compressor driven from the rotor.

The takeoff and landing were performed at full engine power. The hover height was controlled by a winch located approximately 70 m from the platform take-off point and a trio of guide pulleys anchored in the ground. The winch itself was equipped with a 20 hp electric motor that drove three 0.5 m diameter drums. To prevent the winch platform from "overloading" the drums were driven via worm gears. 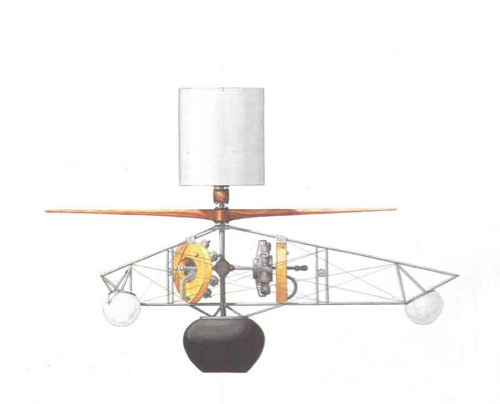 Vile Žurovec, by virtue of his function, managed to get two younger brothers, Josef and Leopold, to cooperate. As they were both manually skilled, they were a welcome help. In addition, Josef was a frontline pilot flying in Flik 26 (Fliegerkompanie) with one Farman shot down and in Flik 29, where he added one Nieuport to his score. 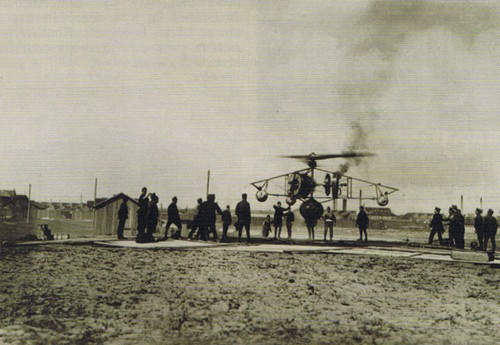 Flight test footage. The smoke is not coming from the engine, but from the factory chimney in the background

The Žurovec brothers completed their machine at the end of March 1918. The first flight test took place on a wooden platform built on the plain in front of the Slévarny and Lipták engineering works. Several take-offs lasting up to one hour were made. During the tests, it was shown that the original U.I. engines were weak. Once the helicopter was out of ground effect, the excess thrust decreased and the helicopter was unstable.

The End of Hope

The tests were suspended on 5 April, for the installation of more powerful UR.II device engines. Flight tests were resumed on 17 May 1918. At low altitudes, an excess thrust of 1.9 kN was measured, which gradually dropped to 1.3 kN as the ground effect decreased and the length (and weight) of the tether cables increased. At 50 m, the excess thrust was already only 0.4 - 0.6 kN, which was insufficient to carry the observer.

As the excess thrust decreased, the tether tension decreased. The platform lost stability and oscillated with increasing amplitude due to the wind blowing off the rotors and thus shifting the thrust from the vertical axis. If it was slowly (about 1.5 m/s) withdrawn to a lower height, the tension of the tether ropes increased and with it the stabilizing effect and the oscillations ceased within 15 to 20 seconds. 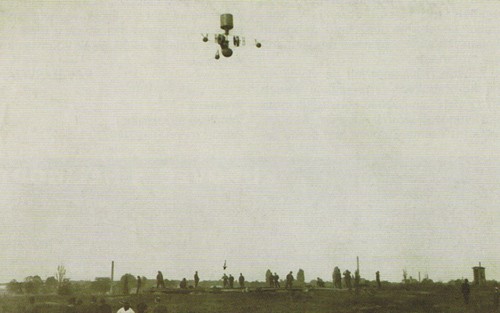 Frame documenting the availability of PKZ-2. At this altitude, the platform was getting beyond the ground effect and was losing stability due to the small excess thrust

The overheating engines, which were gradually losing power, also contributed to the problems. That is why they have been undergoing overhauls and modifications since 21 May. The work was interrupted by a call for Zhurovec to prepare PKZ-2 for the demonstration to the military commission on 10 June. Zhurovets argued that the engines were untested after the modifications, but his arguments against a group of high-ranking officers curious about the new "flight apparatus" accomplished nothing. 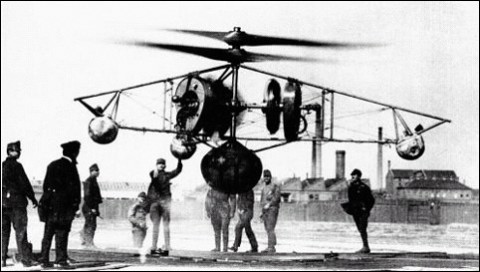 The demonstration started at 5:40am to take advantage of the still calm air. The PKZ-2 was equipped with a nacelle for observers and climbed twice to a height of about 8m. The gondola was then removed. At 6:07 a.m. another take-off was made, but by then the wind was blowing 6-7 m/s. The platform climbed to an altitude of about 12 m (according to other sources up to 20 m), but the overheating engines were beginning to lose power and the PKZ-2 stability. This was caused by a combination of a drop in tether tension and uneven wind blowing of the propellers, which led to shifts in the rotor disk thrust. 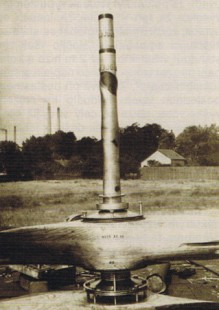 The PKZ-2 began to "swing" sideways with increasing amplitude, and although the operator tried to "pull" it down, at about 2 m height there was an uncontrolled swing and the rotor caught on the ground. The result was a crash and very severe damage to the platform structure and engines. The commander of the Austro-Hungarian Air Force judged the matter to present a number of complicated technical problems that could not be solved in the foreseeable future and cancelled the entire SFF program on 21 June 1918. 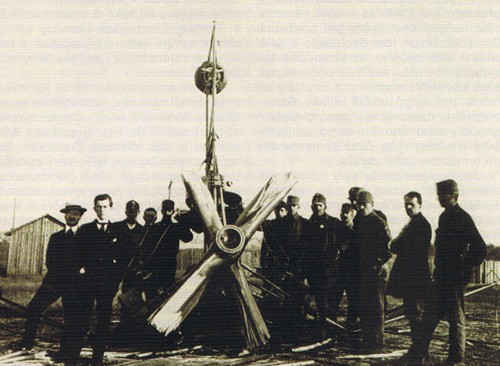 Destroyed propellers of the PKZ-2 platform after the fatal crash on June 10, 1918

Ing. Žurovec still tried to restore the work on PKZ-2, after all, the construction was not financed by the army, but by private funds. However, he was unable to get new engines. He planned to resume flight tests in November 1918, but the same month Austria-Hungary capitulated. The torso of the PKZ-2 was taken away by the Italian occupation commission and, according to Theodor von Kármán, was said to still exist in the museum in 1935. Further details are missing, apparently, it was scrapped.

Engineer Žurovec worked on the design of a more advanced version of the observation helicopter platform. To save weight, the fuselage was to be simpler, with fewer elements. Aluminium was used as the basic structural material instead of steel.

The platform was to carry two observers in the observation nacelle and a machine gun for defence against aircraft. In the event of a shoot-down, Žurovec envisaged the use of a rescue parachute to bring the nacelle with the observers down to the ground. After returning home, Vilém Žurovec and his brothers devoted themselves to the construction of an aircraft with a shortened take-off.