" It is better to lose the amount of one's wealth and to repay with honesty,
than then to lose everything with great shame and ridicule ... "
(Albrecht Jan Smiřický from Smiřice)

As part of the final settlement with the rebellious Czech states and the Czech King Henry Frederick (Hereditary Prince of the Palatinate) elected by them, two enemy armies entered Bohemia in the autumn of 1620. Imperial, led by General Karel Bonaventura, Count Buquoy, and the army of the Catholic League, headed by Duke Maximilian I of Bavaria. Because this educated aristocrat had enough sense to leave the management of military operations to experts, the Bavarian army was actually commanded by a seasoned veteran of the Turkish wars, General Johann Tserclaes, Count Tilly. Although veterans Tilly and Buquoy didn't like each other very much, both allied troops defeated the army of the Czech states in several skirmishes, occupied several cities and in the evening of November 7, 1620, stood in front of Prague. Here, Tilly and Buquoy finally agreed on something - they both concluded that the attack on the enemy army, which has a safe haven for the fortified city behind it, is too risky ...

The Estates Army, encamped on White Mountain, was commanded by Generalissimo Kristián, the older prince of Anhalt. The diverse army, which was to lead to victory, consisted of Czech, Moravian, Silesian, Austrian and Hungarian units, each of which consisted of soldiers from almost all parts of Europe. Under normal circumstances, there would be nothing special about it. Units from different countries routinely cooperated on all the battlefields of the endless Turkish wars, all fighting according to the same training manuals, and all communicating with the international military " Esperanto " based on German. And as for the nationality of individual soldiers - the soldier was primarily a professional, contractually obliged to fight for whoever paid him. Nationality had nothing to do with it.

Anhalt's problem was that his soldiers simply did not want to fight. No wonder. They have been putting their lives on debt for four months because their employers did not fulfill their part of the contract and did not pay them wages. The government had no money. The property confiscated by Catholics and emperors at the beginning of the uprising was gone. War contributions from abroad that went through too many hands were also gone. Nobles and burghers did not want to spend their own resources. And so, on the one hand, they demanded that the hired mercenaries risk their lives for them, but on the other hand, they were not even willing to risk their own money. The peasants had no money, and there was no point in calling them to defend the endangered homeland. On the one hand, they rightly considered the whole uprising to be a lord's fabrication - and on the other hand, they could do nothing against the trained enemy soldiers. The time of enthusiastic Hussite cephalopods was there. Morally and technically ...

Although five thousand soldiers of the Estates Army did not leave the Prague bars and brothels at all on the day of the battle, its position on the White Mountain was chosen well from a purely military point of view. Even so good that a less morally distributed army would secure victory. Professionals Tilly and Buquoy knew this, so they didn't want to go into battle. However, the amateur Maximilian, ignorant of the military sciences and unencumbered by the experience of the Turkish battlefields, prayed briefly - and on the morning of November 8, 1620, he issued an order to attack ...

Imperial General Buquoy thoughtfully spoke out about his health problems and took refuge in the seclusion of his carriage. He sent General Maximilian of Liechtenstein to the battlefield instead. General Tilly - as a direct subordinate of the Duke of Bavaria - could not afford such a thing, so he decided to start the battle with a tentative attack on the left wing of the Estates Army, commanded by Matthias Count Thurn.Perhaps he assumed that a single-third attack ( composed of two Walloon infantry regiments ), supported by Wallenstein's and Gauchier's cuirassiers, would be repulsed, and he would be able to blow the battle. And make your boss an idiot.

Surprisingly, the attack was not repulsed. The nine cornets of the Czech cavalry, which were led by Thurn himself due to the absence of the respective commanders, drove away the imperial cuirassiers, but had to retreat under the onslaught of hastily summoned imperial reinforcements. Then the German soldiers of Thurn's elite infantry regiment fled , even without a single shot. Almost demonstratively. At that moment, the commander-in-chief of the commander, Prince Anhalt, sent his Kyrysnic regiment to counterattack. According to the usual cavalry tactics of the time, the riders, lined up to a depth of about ten rows, trotted to a distance of about thirty steps to the enemy. Then the men in the front row stopped, fired their pistols, turned, and went back through the gaps in the other rows to charge. The riders of the second, third and other series followed. This was repeated until the enemy was shaken enough, then everyone drew their swords and galloped ( in another variant, the riders did not stop when firing, but curled their horses along the enemy line and fired while riding ). This maneuver was called karakola and was the basis of equestrian training for decades. This time, Anhalt's cursors simplified the caracal in the sense that after firing their pistols, they simply escaped from the battlefield and dragged most of the remaining infantry to escape. This disintegrated the left wing of the status line. It was a debacle that dissatisfied Estates soldiers had long threatened ...

The honor of the army of the Czech Estates was finally saved by the German cavalry arquebusiers of the young prince Kristián of Anhalt, who launched a counterattack after the collapse of the left wing. They managed to break one of the imperial thirds and penetrate into the depths of the enemy formation, but without the support of the infantry, they came under siege and Prince Anhalt, the son of the commander-in-chief of the Estates Army, was captured.

The German lancknechts of four companies of Šlik's Moravian Regiment on the right wing ended up similarly. They were unlucky enough to meet soldiers here and there - unlike their happier counterparts from other units ( including the other half of their regiment ) they could not run because they had a wall of royal branches behind them. They were professionals, so they fought. At least for a while. Shortly after the battle, those who survived entered the service of the victorious Emperor Ferdinand II. Habsburg. And even later, as " heroic Moravians ", they entered Czech historical mythology ...

On the other hand, the state reserves, located behind the walls of the Hvězda branches ( including two flags of the Royal Guard ), did not take part in the battle at all and after it ended they allegedly surrendered immediately to the winners. Well-fortified Prague surrendered the very next day - immediately after it was quickly abandoned by the elected Czech King Henry Frederick (Hereditary Prince of the Palatinate).

After a short struggle lasting less than two hours, in which only 250 imperial and approximately 1,500 Estates soldiers were killed, Tilly's " trial attack " turned into a total victory and the Czech Kingdom became an integral part of the Habsburg Empire for three centuries ... 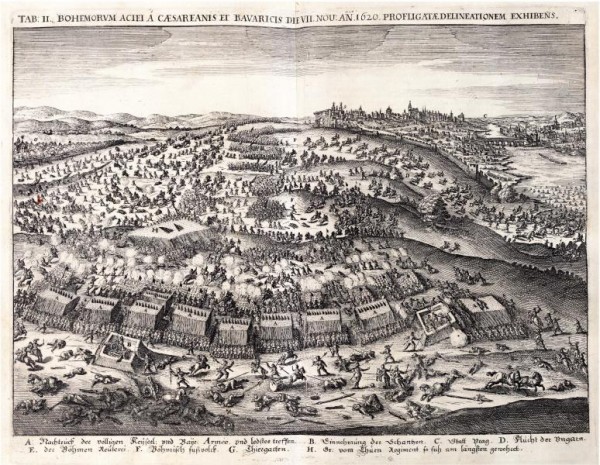 Some garrisons of towns and castles, composed mainly of foreign mercenaries, were much braver than most field armies. Although Karlštejn's English garrison surrendered to the Imperials after the first call, Mansfeld held Pilsen until March 1621, when Friedrich Falcký recalled him to defend his own territory, and the Pilsen garrison in his absence ( allegedly not without his consent ) handed over the city to the Imperials for a bribe of 140. 000 gold.The Dutch colonel Franck surrendered Tábor after a year's siege in November 1621, the Scottish lieutenant colonel John Seton defended Třeboň until March 1622, Mansfeld's lieutenant Hans Junckher remained in Zvíkov even until July 1622.

This did not change anything in the final defeat of the Czech uprising, but the question arises as to what would happen if, in addition to a few lower commanders, higher commanders also showed similar intransigence. They had enough soldiers. In addition to the refugees from the defeated Battle of Bělohorská, another 5,000 men stayed in Prague, who did not bother to come to her at all. At Kostelec nad Černými lesy, 8,000 Bethlen's Hungarian riders were waiting for orders. It was enough to close the gates, summon the Hungarians and pay the soldiers at least part of the wage owed from the money that the emperors later took as war booty. It did not happen, although already in 1618 Albrecht Jan Smiřický of Smiřice ( 1594–1618 ) exhorted his noble and unborn co-insurgents that after all " ... it is better to lose the amount of his fortune and to return with honesty than to come with great shame and ridicule afterwards. about everything ... "

Jan Smiřický did not live to see the defeat on White mountain, but his words came true ...