On July 23, 1942, Hitler issued Directive 45 for an eccentric attack on the Caucasus and Stalingrad. The Führer wanted to achieve both goals simultaneously. This led to a fragmentation of forces that resulted in disaster at Stalingrad and in the Caucasus. The attack on the Caucasus (Operation Edelweiss) was assigned to Army Group A under the command of Field Marshal List. The aim of the operation was to cross the Caucasus, seize the oil fields of Azerbaijan, and occupy the entire eastern coast of the Black Sea, thereby knocking out the Soviet Black Sea Fleet. Army Group A included the 1st and 4th Mountain Division. In mid-August, members of these divisions fought their way up to the high passes in the Caucasus around Elbrus. While the 1st Division was deployed towards the military road to Sukhumi, the 4th Division penetrated directly through the High Caucasus. The advancing mountain thinkers looked up to the unmistakable landmark of the Caucasus - Elbrus.

German advance in the summer of 1942
Gdr, CC BY-SA 3.0, commons.wikimedia.org

The Caucasus mountain range stretches from northwest to east-southeast for 1,200 km. It is not crossed by any railway, but only by two military roads. The "Central Caucasus", rocky to the east and covered with forest to the west, is crowned by some 10 four-thousand-peaked peaks and four "five-thousand-peaked" mountains. The highest mountain in the Caucasus and all of Russia is the long-extinct, 5,642-metre-high Elbrus volcano, unmistakable and unmistakable because of its profile formed by two glacier-covered peaks. According to some geographers (strangely enough not Soviet but American), who consider the main ridge of the Caucasus to be the border between Europe and Asia, Elbrus should also be the highest mountain in Europe, thus depriving Mont Blanc of its primacy.

View of Elbrus from the north
Von Lev Kalmykov, commons.wikimedia.org

The ascent of Elbrus is not technically difficult. However, due to the altitude and long ascent, it requires good physical fitness, aided by acclimatization. Sudden weather changes, associated with freezing blizzards and tens of centimetres of fresh snow, can make it a risky affair. 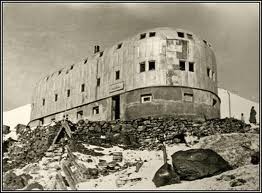 On August 14, mountain hunters from Captain Groth's reconnaissance company crossed the Chotju-Tau pass and had in sight the "Elbrus House", an aluminium-covered mountain hut built in 1939 by the tourist agency "Inturist" for Westerners interested in climbing Elbrus. Now the hut served as a barracks for Soviet highland troops. Npor. Schneider from the 54th Mountain Reconnaissance Troop sent a patrol there, which stationed itself on the rocks around the hut. Soon after, Groth, far ahead of his company, climbed alone into the hut, where the Russians captured him. He made an agreement with them that they were free to leave if they handed over the building and its associated weather station to him. Whoever wants to stay can stay. This valuable foothold thus fell into German hands without a shot being fired. The large building offered accommodation for more than 100 men and a large supply of provisions and clothing. 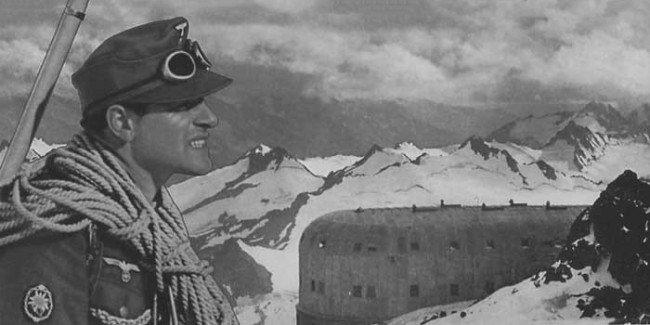 Groth's men immediately secured the station and made their first unsuccessful attempt to reach the summit on August 19, due to the deteriorating weather. Even then, the weather was not in the men's favour, but their courage paid off. With a maximum effort, a combined group of 8 men from the 1st and 4th Divisions under the leadership of Lt. Leupold's squad, which was whipped by a gale, raised the Reich war flag and the flags of both divisions at 11 a.m. on 21 August. 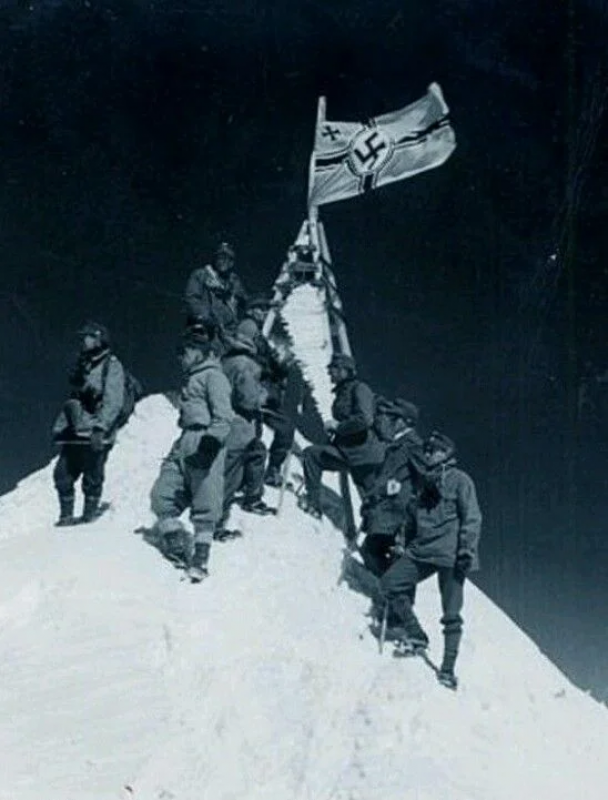 Mountain hunters at the top of Elbrus

According to the recollections of Albert Speer, Hitler fell into states of rage quite often, but rarely did he explode as he did upon receiving news of the Elbrus ascent. He raged for hours as if the event had ruined the entire plan for the summer campaign. Even in the following days he persistently cursed those "crazy climbers who belong in a court-martial". He indignantly claimed that in the midst of the war they had succumbed to their idiotic ambition and climbed that idiotic peak, even though he had ordered that everything must be concentrated on the advance to Sukhumi. Here, however, we can clearly see how his orders are being carried out.

General Hubert Lanz, commander of the 1st Mountain Division, had a different view of the matter. In his study of the field campaign into Russia, he commented, "The idea of the 1st Mountain Division command was to satisfy the self-evident ambition of the German mountain troops in raising the flag on the highest mountain in Europe, which, after all, was only carried out by one small unit. Of considerable tactical importance, however, was the capture of the Elbrus House at 4200 metres, serving as a military strongpoint with a Russian garrison of about 80 men, from which it was possible to control the approaches from the Elbrus Glacier over the Dongus-Orun, Assau and Nachar passes to the south and south-west to the Klitschko valley, and thus the outcropping of the mountains towards Sukhumi! So Mr. Hitler was not quite "in the picture" again.

While the Reich's war flag was flying in a blizzard on Elbrus, and Hitler, in the circle of his confidants, thousands of miles from the Caucasus, was grumbling about the senselessness of climbing the mountain, the mountain hunters were advancing through the valleys towards the passes, with the aim of crossing the mighty mound of rock and ice and conquering part of Asia in accordance with orders.

Rumours arose on the Soviet side about the conquest of Elbrus, including the successful bombing of the Elbrus Hut. In reality, only the fuel depot below the hut was hit. It remained in German hands until early January 1943. Due to bad weather, the Soviets managed to remove the German flag from the top of Elbrus only in February.