The Story of the Sea Bees

On September 1, 1942, the landing boats began unloading from the bowels of the transport ship Betelgeuse, which had just arrived from the Noumea base in New Caledonia on the orders of Vice Admiral Ghormley, commander of the South Pacific Area, to ferry to the shores of Guadalcanal 390 men from the 6th Sea Bee Battalion, and with them engineer material, two bulldozers and six 127mm coastal guns. Many of the naval infantrymen who were helping with the landings or just watching at the dock watched with interest as the soldiers, not exactly young and many already with their hair streaming grey and exuding the confidence of experienced men, stepped out of the boats... 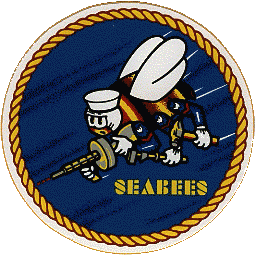 As early as the fall of 1940, many of the more astute American officers began to realize that war with Imperial Japan was knocking at their door, and they began to reinforce their forward positions in the Pacific, primarily by building fortifications, fuel depots, billets, and especially airfields. Civilians, employees of construction companies under contract to the military authorities, were hired for this construction and engineering work. After the Japanese attack and the victorious campaign of the first months of the war, not only the Marine crews but also these civilians found themselves under fire on the threatened islands. Because they lacked military training and were unable to handle weapons, they could not help the combat troops in any way. And in the event that they were captured, they also lacked the protection afforded to soldiers in uniform under international agreements. Therefore, the Navy Department decided to create, after previous experience, Marine Engineer Battalions (Construction Battalions) whose members would be not only experienced technical and engineering experts but also trained soldiers in uniform. The relevant ministerial decree was issued on 28 December 1941 and recruitment began immediately. The response exceeded all expectations. Several thousand men with experience in more than sixty different professions volunteered to fight. The average age of the men recruited was around 31. These citizens, therefore, because of their age, were able to stay safely at home with their families and, because of their qualifications, to work comfortably for decent wages in the war industry. Their decision to volunteer their lives to fight against an enemy who was insidiously unleashing the hell of war in the uncharted waters of the Pacific must therefore be commended.

After being accepted at the training centers, the volunteers underwent rigorous training with a special focus on amphibious landing operations. Completion of the training was followed by formation into battalions, relocation to forward bases and then deployment to the theaters of war. The officer corps consisted of both members of the Naval Engineer Corps, but very often officer rank was awarded to able men from the volunteer ranks. A high number of volunteers were also given non-commissioned officer ranks. The individual battalions were then organized in such a way that each could operate as an independent unit, including equipment and light and heavy equipment, and carry out all the engineer work.

The name Sea Bee was derived from the English initial letters in the unit names, i.e. construction battalions, i.e. "sea" and "bee" which simultaneously means "sea bee" i.e. in Czech "sea bee". It is, by the way, a very apt name and their emblem has become a flying bee with a sailor's cap, carrying a machine gun, a French key and a hammer.

The first unit of Sea Bees to find itself in sharp combat action against the enemy was the aforementioned 390-man section of the 6th Battalion, which was instrumental in the fact that the Americans not only held the island , but eventually forced the enemy to retreat. Virtually immediately after the landing of men and materiel, the unit took over from the Marine Corps engineers the responsibility of maintaining and expanding Henderson Airfield and many other tasks, such as building roads, electrical facilities, fuel tanks and depots, constructing shelters and quarters, in short, whatever was needed. In addition, she also repaired machinery, built landing facilities and participated in the unloading and loading of transport vessels. The most crucial task, however, was to take care of the airfield, which had to be kept operational so that both bomber and fighter aircraft could operate from it, their combat activity being essential to repel the continuing enemy onslaught. Yet the conditions prevailing on the island were extremely difficult. The terrain, constantly muddied by numerous tropical downpours, provided the worst possible base for runways and had to be constantly reinforced with gravel, crushed coral and coconut palm trunks. It was only on top of these layers that the metal wires came in. Despite being drenched daily with rotting equipment, surrounded by mosquitoes in the stifling heat, and plagued by malaria, the men were able to not only improve the main runway but build two shorter ones for the fighters. Work was only interrupted when Japanese bombs or artillery shells fell. After only a few days on the island, the Sea Bees gained well-deserved respect and admiration that would follow them around the Pacific theatre of war until the end of the war.

Typical working conditions of marine bees in a tropical downpour

And in conclusion, let me quote an excerpt from a statement by the commander of the Guadalcanal Sea Bees, Frigate Captain J. P. Blundon:

"We have found that a group of one hundred members of the 6th Sea Bee Battalion can repair the damage done to the runway by hitting a half-ton bomb in forty minutes, including replacing the metal wire, so that forty minutes after the bomb explodes you will not know that the runway has been hit. Although the repair rate was great, we needed to increase it even more. For example, on the 13th and 14th of October, 53 bombs and shells hit the airport's main runway. In one hour we managed to obliterate thirteen bomb craters while our planes circled overhead waiting to land. During this time we received no provisions, as all the cooks were busy laying wire. As we did not have enough shovels, some of the men were scooping and bringing earth into the craters in their helmets. Between 1 September and 18 November 1942 we recorded 140 enemy raids in which the runway was constantly being destroyed, and add to that the artillery shelling!!! By far the worst moments we experienced were when a bomb or grenade did not explode. They broke through the wire anyway and had to be pulled out. Seeing the men who suppressed their fear and dove for the unexploded bomb so the planes could land safely made your throat tighten and you understood why we had to win the war. The pinnacle of danger was the work of filling in the craters left by unexploded artillery shells. Everybody feels that two bombs can't fall in exactly the same place, but that doesn't apply to artillery shells. A Japanese 127mm cannon fires a grenade on the runway and the explosion leaves a big hole. What on earth are you supposed to do now? You realize that the Japanese artilleryman knows that if he leaves the gun aimed the same way and fires another shell, it will land in almost the same place as the first. The Japanese were fond of using this trick, always waiting until we started filling the hole and then firing again. In this situation, you can only rely on hearing the grenade approaching and managing to get away before it explodes. Now that's a game no insurance company would be happy about."
The excerpt is from W. B. Hui's 1944 book, The Story of the Sea Bees.