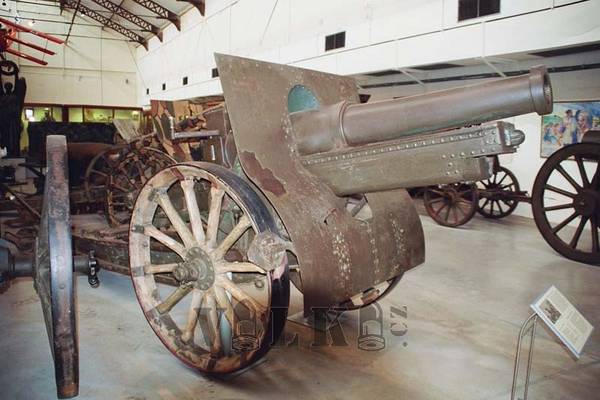 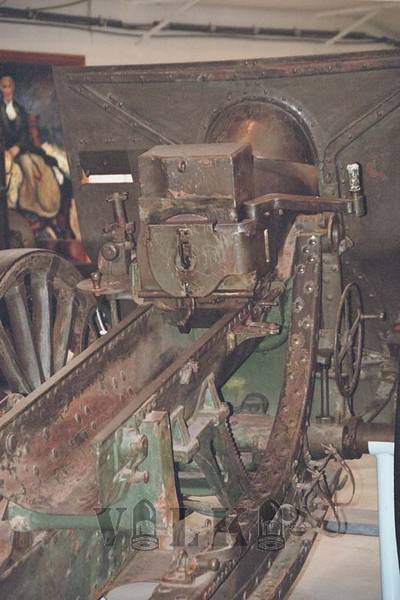 Weapon system Schneider with the eccentric screw in conclusion was produced from the summer of 1914 by the firm of Schneider et Cie. in Creusotu. The howitzer was made in the total number of nearly 3 000 pieces and in addition the French army it has gained 15 of the european armies, that it should be in the arsenal throughout the interwar period.
In Czechoslovakia it was in the course of the year 1919 delivered a total of 51 pieces of howitzer from war production, with part of the material was in bad condition and damaged. From the mid-twenties were howitzers used only as a practice for regiments of heavy artillery and to the decommissioning of the equipment occurred in the year 1935.
Howitzers was made up of a single transport unit, a steel barrel consisted of casing, the soul and the conclusion had constant recoil, and in the cradle was supplemented by the fluid brake, air vratníkem and static vyvažovačem. The cradle and the gun carriage were made of moulded steel profiles, the carriage was a steel shield, targeting was carried out using bubínkového of the reticle, a mort telescope and libelového quadrant.
During transportation the barrel was the pulled back and thrust was used šestispřeží or osmispřeží (according to the complexity of the terrain).
The shooting was conducted by crushing the shells vz. 15 caliber 155 mm.

Literature:
Fidler, George - Woodcock, Václav: the Encyclopedia of military power of czechoslovakia 1920-1938. Prague, Libri 2006..
URL : https://www.valka.cz/155-mm-C17S-155mm-houfnice-t588#175411Version : 0
Jiří Fidler MOD 16 years ago
the heavy cannon that has been in the arsenal since its introduction in 1917 until the end of WWII. for WWI it was introduced into the armament of the american expeditionary forces in Europe. After WWI the gun was widely exported and came to weaponry in addition to other like Italy, Poland, Belgium and other countries. Usually it was known as C17S. Fracouzská army of them in 1939 should have in the arsenal yet to 2043 units. A considerable part of them has become prey to the WH and he is ranked under his designation of the equipment of its artillery regiments. Many of them were used for coastal defense on the so-called atlantic wall.
The weapon is originally called Canon de 155 C mle.1917 Schneider. In Belgium, the designation of Obusier de 155, Polish then 155 mm haubica wz.1917, the Italian name was Obice da 155/14 PB. The germans their prize howitzer called depending on where it is captured, 15.5 cm sFH 413(b), 15.5 cm sFH 17 (p), 15.5 cm sFH 414 (f) or 15,5 cm sFH 414 (i) (where the letters in brackets indicate country of origin - Belgium, Poland, Italy and France.