When and where did Harry Potter die?

At the outset, I think it is necessary to say that despite the slightly misleading headline, it will not be about the world-famous hero of JK Rowling's novel, but about a real young man named Harry Potter, who laid down his life in suppressing the so-called Arab uprising in present-day Israel.

Harry Potter was born on September 16, 1920 in Kidderminster ( Worcestershire ) to a poor family in which his parents raised seven other siblings in addition to him. It is therefore not surprising that he left school at the age of fourteen and found a job in a carpet factory to bring home at least some of the money he needed. 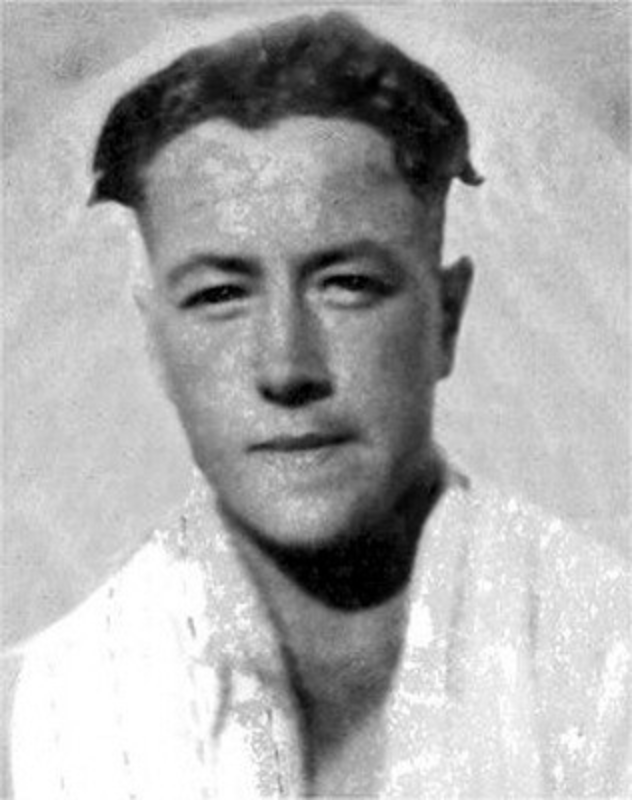 Service in the army

Like many young men at the time, Harry saw a chance to escape misery by serving in the military. In early 1936, therefore, he arrived in Birmingham , where he enlisted in the British Army. Because he had not yet reached the required retirement age, he stated his date of birth as September 16, 1919. This small lie came out and on January 3, 1938, Harry Potter became a soldier in the 1st Battalion of the Worcestershire Regiment. 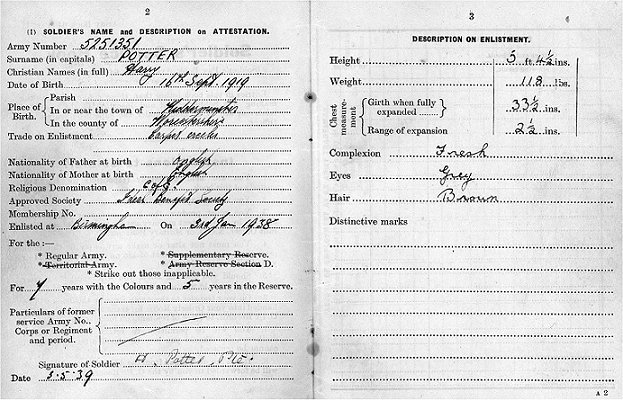 For example, it is clear from the preserved documents that Harry had gray eyes and brown hair

After eight months of basic training, he was granted a short vacation, which he spent with his loved ones. His mother was especially proud of his son, but certainly also his father, who brought home from the bloody battles on the river Somme a shrapnel stuck in his skull. However, the work of the peacekeeping crew ended very quickly for the Potter soldier. Already in September 1938, his 1st Battalion received an order to move to what was then Palestine. His unit was one of many tasked with reinforcing the British garrison stationed in the unrest-stricken country.

In this context, I will allow myself a brief historical excursion in relation to the operation of British troops on Palestinian territory. This territory was not a British colony, as it might seem at first glance given the superpower status of England at the time. In the period 1919-1948, Palestine was only under the so-called mandate administration of Great Britain, to which this ungrateful role was entrusted to the Commonwealth of Nations ( UN predecessor ). The aim of the British mandate was to gradually create the preconditions for the establishment of a " national homeland for the Jewish people " in this territory, which was lost to the Ottoman Empire after the First World War. However, this concept logically did not absolutely resemble the original Arab population, for whom this territory was home. The result was the so-called Arab Uprising, which broke out in 1936. The uprising was aimed primarily at mass Jewish immigration and, secondarily, against the British administration. I will slightly overtake the described events when I state that the uprising ended in September 1939.

But let's go back to soldier Potter, who on September 26, 1938 also landed with his comrades in the port of Haifa , where he was transported from Southampton , or more precisely crossed, the steamer HMT Neuralia. 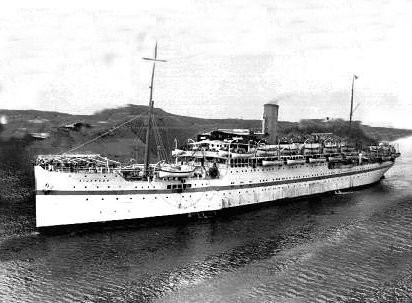 The ship HMT Neuralia, on which the soldier Potter sailed to Palestine

For the first months in a new exotic location, private ( soldier ) Potter served in various places.As one of the drivers of the battalion's trucking division, he often moved between Bethlehem, Hebron ( where the unit headquarters and the hospital were located ) and an area called Deir Sha'ar. 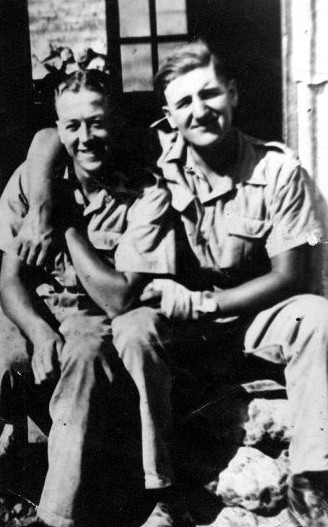 Harry Potter ( left ) along with his best friend in the unit, Soldier Holland

In the spring of 1939, Harry Potter was transferred to Company " D ", which had been based in Deir Sha'ar since November 1938. There he was guarding a water reservoir less than ten kilometers south of Hebron, supplying water to this, the second holiest city for the Jews. By the way, even today, a pipeline leads through this area, supplying the much-needed water to the 260,000 inhabitants of the southern part of the West Bank. Service at this location was, on the one hand, quite popular with men from the Worcester Regiment, as it was a relatively quiet and isolated area, but on the other hand, it was this separation that caused the reservoir to occasionally become the target of Arab shelling.

On Saturday evening, July 22, 1939, a private Potter, along with other members of Company D, moved from As Sam when, at kilometer 39 of the Hebron-Beersheba road, they encountered a gang of Arab insurgents. At the same time, it was this group that had previously raided an armored RAF vehicle. During an armed skirmish, 18-year-old private Harry Potter was killed and soldiers Darby, Warwick, Pearson and Simmonds were wounded. Soldier Joseph Darby died of his injuries at a hospital in Jerusalem on September 7, 1939. Harry Potter was buried with military honors in a military cemetery in Ramle , now in the present state of Israel. 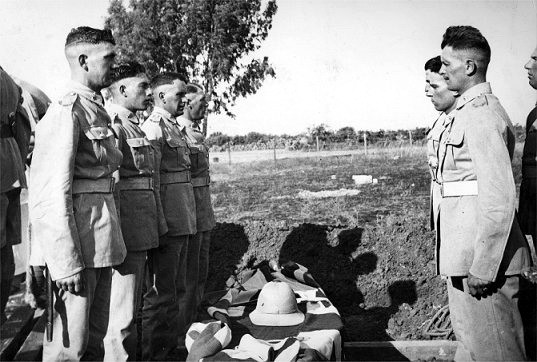 The funeral of soldier Harry Potter with military honors

For seventy years, the last resting place of soldier Potter was only one of more than eighty-three other graves of British military victims of the so-called Arab Rebellion. But everything was changed by " Potteromania ", which broke out after the publication of a series of books about a young wizard and the accidental discovery of a world-famous name on a tombstone by unknown tourists in 2010. Since then, the military cemetery has become the most visited tourist destination in Ramel and which fell during the so-called Arab uprising in Palestine. 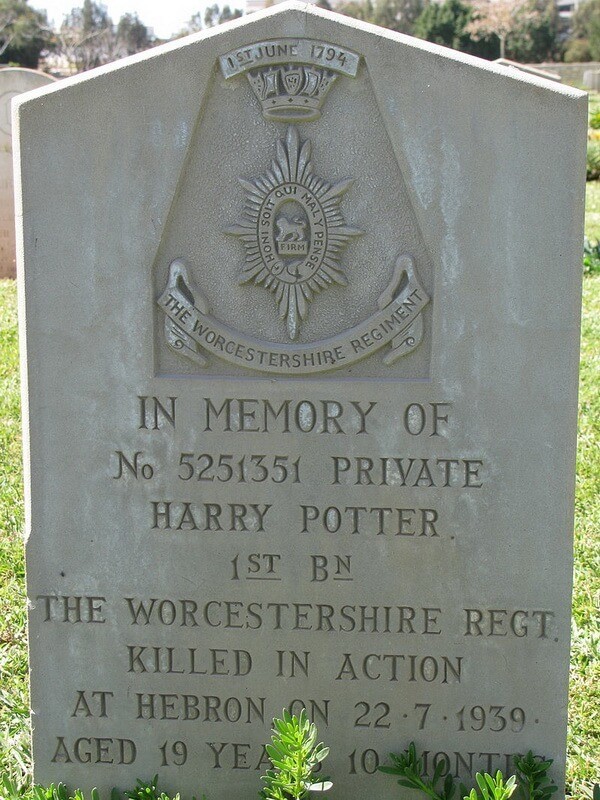 A tombstone in a military cemetery in Ramel, Israel