Benito Mussolini's dream to recreate a modern Roman Empire crumbled by April 25, 1945. With the anti-fascist partisans repeatedly seizing multiple cities in northern Italy and the Allies rising from the South, Mussolini's power was quickly fading away.

In 1922, Mussolini, the Italian dictator became the prime minister and desired to become a present-day Julius Caesar. The 61-year old "II Duce" who rose to power around two decades earlier, became allies with Nazi Germany and Adolf Hitler in World War II. However, the Italian military was outdated which caused them to get badly outclassed in WW2. 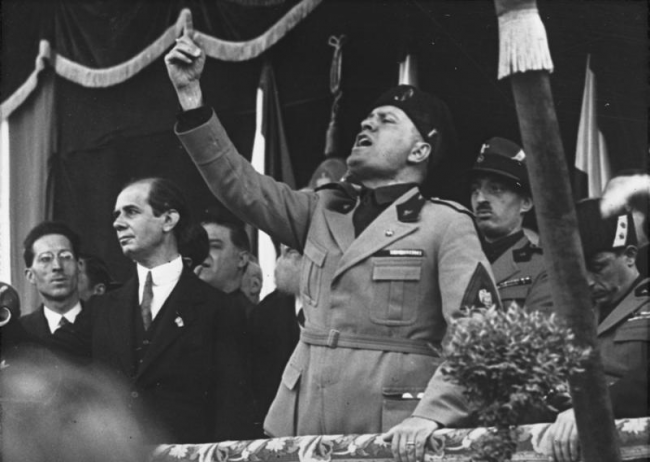 By July 1943, there was a bombing in Rome, and Sicily was invaded by the Allies. This caused King Victor Emmanuel III and the Italian high command to place Mussolini under house arrest after removing him from power.

In September 1943, the Nazi paratroopers performed a nerve-wracking commando raid and rescued Mussolini from his captivity in the Apennine Mountain Ski Resort. Thereafter, Hilter positioned Mussolini in the Social Republic of Italy (a Nazi pawn state of northern Italy) as the figurehead.

The Allies began to fight for the Gothic Line during mid-April 1945. This line was held by the German from the beginning of October 1944. On April 19, 1945, the German defenses crumbled which allowed the allies to get started with their final campaign towards northern Italy. Moreover, by April 25, 1945, the Third Reich was losing its control of northern Italy quickly.

On April 18, 1945, Benito Mussolini reached Milan. With the unsteady control over Milan, Mussolini agreed to have a meeting with the representatives of the partisans. On April 25, he attended the meeting at Milan's Cardinal Alfredo Schuster's place with the Committee of National Liberation – Northern Italy representatives. However, realizing the demands of the partisans for unconditional surrender, Mussolini went furious. He left the meeting with a promise to revert to the negotiations in the afternoon. However, he never did.

After storming out of the meeting, Mussolini fled from Milan along with Clara Petacci, his 33-year old mistress. He intended to cross into the border of neutral Switzerland in his Alfa Romeo sports car that he had bought for his girlfriend as a gift. A group of S.S. that was led by Lt. Fritz Brizer and the Italian Social Republic remnants forming a part of the Fascist leadership accompanied Mussolini.

The convoy of German soldiers and associate Fascists left Milan and headed for Lake Como towards the North. They brought along a considerable amount of gold bars, documents, and international banknotes (Pound Sterling, Italian Liras, and Swiss Francs).

The Convoy joined hands with a Luftwaffe A.A. company and headed north on the night of April 26. However, on the 27th morning, the convoy faced a roadblock near Musso. Communist partisans led by commander "Pedro'' fired some shots. The Germans decided to approach them with white flags and were allowed to proceed north after a prolonged negotiation.

The partisans announced to inspect the convoy on the next stop, the village of Dongo. The German emissaries thought of surrendering their crews in Italy and this sealed the fate of Mussolini.

The partisans, on the other hand, hid behind greenery and rocks in few numbers. They readily accepted the negotiations they feared to be defeated by the German column. The fascists were soon removed from the convoy after Lt. Brizer conveyed the agreement terms to the fascists. However, Mussolini remained in the Convoy as a German soldier in disguise while holding back important papers.

The Capture of Mussolini

The partisans started to inspect the trucks on the arrival of the convoy at Dongo. Giuseppe Negri identified the Duce and quickly reported the same to political commissioner Urbano Lazzaro. However, Lazzaro didn't believe Negri and hopped on the truck to see for himself.

Mussolini was arrested and locked in an abandoned police office of a nearby village while the other fascist leaders were held captive in Dongo. The partisans confiscated all their belongings and Captain Neri stocked them in the nearby Dongo City Hall. Gianna was then instructed to prepare a full record of the confiscated items.

Later that night, Mussolini was moved to several locations under the protection of Commander Pedro, Captain Neri, Gianna, Michele Moretti, and two other partisans. This was done to transfer Mussolini to the emissaries conveyed by General Raffaele Cadorna.

The partisans feared that the Fascists loyalists would try to rescue Mussolini and bring him back to safety. To prevent this, the partisans transferred Mussolini to a farmhouse near Dongo and reunited him with his Mistress, Clara Petacci. Petro, Neri, and Gianna moved back to Dongo while leaving behind two partisans to guard them.

However, the verified data on Mussolini's death ends here and leads to the rise of several questions.

The Official Narrative of Mussolini's Death

On the night of April 27, the CLN-AI members unwillingly handed over the possession of Mussolini to the Allies. However, Socialist Sandro Pertini, Communist Luigi, and the Italian Communist Party's future President decided to secretly send a group of partisans to execute Mussolini in Dongo.

On the 28th morning, Aldo Lampredi, Colonel Valerio, and 15 other partisans reached Dongo in the afternoon. Michele Moretti, Valerio, and Lampredi drove Mussolini from the farmhouse to the Giulino di Mezzegra village and ordered the troops to arrange two roadblocks closing the two main entry points of Villa Belmonte.

The group stopped at the Villa's entrance at around 4:00 PM and commander Valerio commanded Mussolini to stand close to the wall. Valerio then fired his gun after pronouncing the death order of Mussolini. However, he borrowed the French MAS-38 submachine firearm of Moretti as his gun got jammed. Claretta Petacci jumped in front of the bullets and both Mussolini and Claretta were ripped off by the bullets.

The partisans loaded the dead bodies on a truck and headed over to Dongo where they collected the corpses of the other fascists that helped Mussolini. The dead bodies were finally dropped off at Milan unfolding the Piazzale Loreto macabre show.