1st Battle of the Isonzo

URL : https://www.valka.cz/01-bitva-na-Soci-Isonzu-1915-t123785#421453Version : 0
Karel Oktábec MOD 9 years ago
After a seven-day artillery preparation, which for the inexperience of the Italian artillery has caused to the defenders of the loss of only 300 men, attacked the 18 Italian divisions to 8 divisions of the austro-Hungarian in the direction of Gorice (Gorizia) and the heights of Doberdo. Despite more than double the superiority of his opponent, reflected the austro-Hungarian units all attacks, and maintained their positions. The italians lost 15 000 men (dead, wounded and missing or captured), the Austrians 10 000... 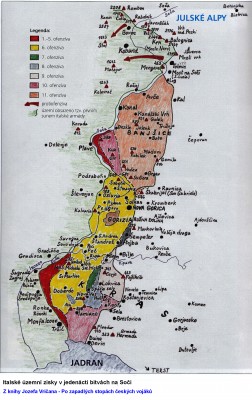 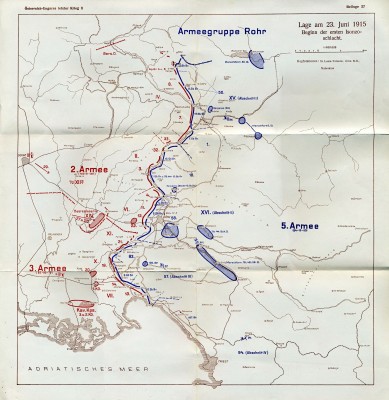 ...Then zabouřila volley and an Italian officer fell to the ground. He raised his head again and the hand and once again, but already weakly, called out, "Eviva". Then stretched out on the trench and he was dead. Hero!
I looked like a drugged, I did not even think to shoot. "Pucej – pucej", yelled Dalmatinac, who a moment ago so piously prayed. "Hajde to vrágu", I answered him. Why shoot? The italians may povylezli a little above the trench, but apparently they didn't want and also didn't shoot. We looked at each other and enough. Finally, the death of the officer was with them always at the end of the attack. Behind us there was a "hurrah", our second platoon rushed into a counterattack. The situation was interesting. It to our trench and over. Jump between the Italians didn't want anyone and remained standing in the trench behind us, and also shot. The situation almost ridiculous figured out Dalmatinac, who grabbed a big lump of clay and máznul it among the Italians, where one Beppovi spattered on his head. It was the signal for the slaughter, which I had observed as idle spectator and enough when it entertained. Rifles and bayonets were forgotten and as once in the village the boys among themselves they began to adversaries to cut clods and rocks, pieces of wood and equipment – hence the guns, which on hand was enough and the administration cost less than a penny. In addition to the warriors, nothing happened. All of this was happening over our bags, many were just mere spectators. But that on the side of the Italians are taking the matter seriously, I recognized right away when one Dalmatinac out of mere curiosity he climbed up to the trench and when he saw the Italians in close combat, he gave into the chechtotu. Long but not laugh – a dirt scoop he dissected the skull up to the eyes and remained lying, he didn't even move. The company was known as an idiot, and his diversion to the army of Austrii honor done.
His death, however, gave the battle a different character, as the others saw what I saw. Began to crack shots Dalmatinců with the relevant boning ' materí talianských and other epithets. Dalmatinci were getting to the boiling point and so any defection wasn't even thought of. Right next to my ear me starburst now shot, which made me totally deafened by. The modlivý began to burn like crazy. For the second platoon rozštěkal with the machine gun and the battle had a different character. Easily passed about twenty Italians to us in the trenches and at the same time with them attacking the second platoon with us looking for protection from the machine gun. Friend and foe, and crouched in front of hvízdajícími bullets over the trench.
Barely ceased the rattle of our machine guns, they were already here again, the grenades, the Italian, the reward for the thwarted attack. The italians in our trench were to maintain and the signs were showing in the front. We didn't yet know that bringing such a squad of prisoners with a full armament is a heroic act, which rewards the silver medal with a monthly surcharge of 15 crowns, and so we let them go alone. They went, as if it anoints...