URL : https://www.valka.cz/Oddil-utocnych-del-242-1942-1944-t185123#540314Version : 0
Gebirgsjäger MOD 6 years ago
Assault Division 242 was established in Jüterbog during November 1942 at the request of the general Rommel to provide a complete section of offensive artillery to support infantry on the North African battlefield (so far operated there only one battery armed with three StuG III Ausf. C a D ) .

However, only 1. battery was sent to Africa in December, included in Tank Artillery Regiment 90 10. tank division and renamed to Battery Assault Cannons 90. The remaining two batteries handed over tropical gear and the division was sent to the Eastern Front - direction Stalingrad .

On January 13, 1943, it arrived in Ostrogozhsk on the Middle Don and immediately joined with 168. infantry division to fight east of the city. During the Soviet Ostrogozsko-Rossošska operation of the Voronezh Front, the unit suffered such heavy losses that it ceased to be combat-ready.
The remnants of the decimated section were sent back to Jüterbog on February 21, where a practically new section with three batteries was assembled, armed with 22 assault cannons StuG III and 9 attack howitzers StuH 42 .

The spring was followed by a move to Italy, where the unit was included in the army reserve in the vicinity of Pisa. In the summer, along with 90. division of tank grenadiers deployed in Sardinia (here the Germans expected the Allies to land) and in the autumn was deployed to anti-guerrilla operations in Corsica.
In early 1944, he returned to the Apennine Peninsula and on February 14 was renamed Assault Brigade 242 .

The brigade's batteries (armed with assault howitzers StuH 42 ) were deployed on the heaviest sections of the Italian front, including Monte Cassino, where 5 assault guns of the 3rd battery provided support 1. the parachute division and others StuGs operated in a wooded area southwest of the city Cassino. At the end of May, it was reduced to half, had only one combat-ready StuG III (13 StuGs and 4 StuHs were under repair) and was waiting to be supplemented by 17 new machines from Germany.
This was followed by retreat battles along the Adriatic coast towards the Po and support 29. Tank Grenadier Division in the battles for Rimini .

The beginning of 1945 caught a brigade in the group I. Airborne Corps during the defensive battles at Imola and about Bologna. During the spring, the brigade retreated north, with the last four StuGs crossing the Fall and retreating toward Belluno. After the collapse of the Italian front (no longer StuGs , the latter was abandoned in Bassano del Grappa), it reached the foothills of the Alps and on May 2, 1945, surrendered to the Americans near the town of Bruneck in South Tyrol. 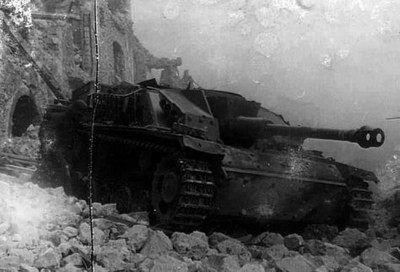