After the defeat in World War I , Germany ceased to be a monarchy. The so-called Weimar Republic was created. It was in a huge crisis in the early 1920s.

As always, the unhappy economic situations used extreme forces. The importance of the extreme left represented by the communists has grown enormously. Sharply nationalist forces were formed against them. The struggle between the communists and the so-called Freikorps was a daily phenomenon on the German streets.

In this situation, the importance of the extremely chauvinist NSDAP party, led by the Austrian native Adolf Hitler, grew. The government's inability to solve the country's problems added to its popularity, although of course there was no mass popularity yet.

In any case, Germany's economic problems brought with it its impotence in paying reparations. This was used ( or misused ) by France and occupied the Ruhr area in early 1923. This unilateral act provoked a storm of protests in Germany. They lasted in most places until September 1923.

The only federal state where resistance did not cease was Bavaria, a bastion of nationalism. Hitler used the situation to try to seize power. He basically wanted to repeat Mussolini's march on Rome from the previous year.

On November 9, he launched his infamous campaign. However, the coup attempt was thwarted. He was not even supported by officials of the Bavarian provincial government. Hitler and nine others, including the famous General Ludendorff , were arrested.

The trial began on February 26, 1924 at the barracks in Nymphenburg. The whole process was like a huge farce. For example, no one was reprimanded for ridiculing then-President Ebert , who was indicted in his statements by the defendants. Hitler used the whole trial for self-promotion. His endless speeches departing from the subject of the accusation were tolerated. His speeches almost did not end (the length "topped" perhaps only Fidel Castro with the defense after his arrest in 1953 ).

The result was Ludendorff's pardon, and Hitler himself received a minimum rate of five years. It may be interesting that the verdict was handed down on April 1, 1924. It was the April arrival of the entire proceedings that carried the verdict.

The person of the man who presided over this court - Georg Neithardt (he is the first to sign the judgment ) is not without interest either. Neithardt was promoted in September 1933 out of gratitude by Hitler - he became chairman of the Higher Regional Court in Munich. He died in 1941. It is remarkable that until his death in 1992, his wife received a pension as a widow of the President of the Supreme Land Court - another 47 years after the fall of the Nazi regime! Otherwise, as a memento of the whole process, a sentence spoken by one of the jurors, who was evaluated by the main culprit, may act: " But he is a great guy, this Hitler … "

I. About the defendants:

5. W eber Friedrich, b. January 30, 1892 in Frankfurt n.M., assistant at the Veterinary Faculty of the University of Munich, in pre-trial detention in this case since 9 November 1923.

B ruckner, R ö hm, P ernet, W agner a F r I ck
each for the crime of complicity in high treason to 15 months in prison.
The time spent in pre-trial detention is deducted from the total length of the sentence. For Brückner 4 months and 1 week, Röhm and Frick 4 months and 3 weeks, Pernet and Wagner 2 months and 3 weeks.
Also for the payment of a fine of 100 gold marks or for another 10 days of imprisonment, all for the payment of court costs.

II. L Udendorff was acquitted of the charge of the crime of high treason.

III. The detention order against Frick, Röhm and Brückner expires.

Resolution:
Convicts B r ü cknerov I, R ö hmov I, P ernetov I, W agnerovi and F r I ckov I shall, with immediate effect from 1.4. 1928 permits parole.
Convicted HI tlerov I, Pönerner I, W eber and K r I ebel
after serving 6 months, it is possible to condition the remaining amount of the sentence. 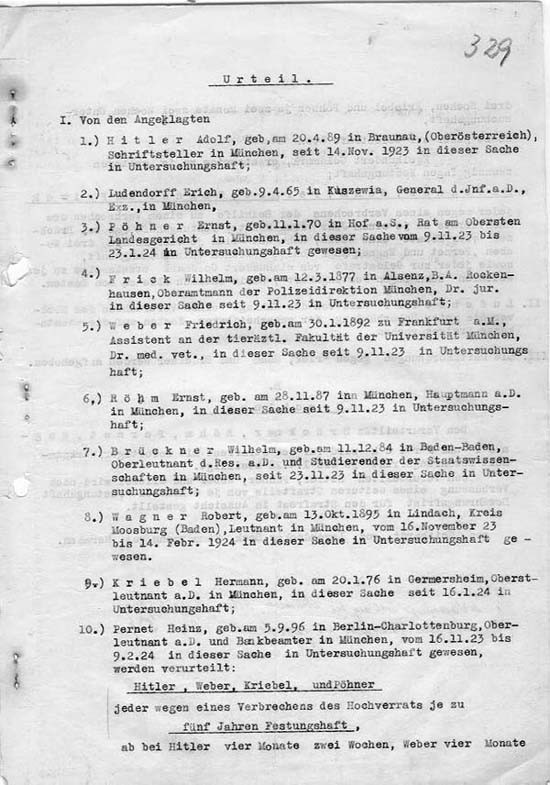 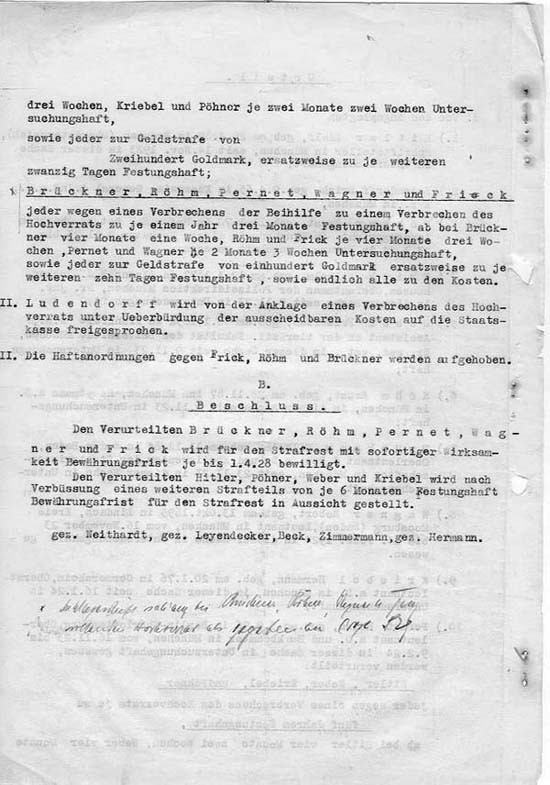