During the search for photos, time, circumstances and finances forced me to buy a PC and install the Internet. In some forums regarding es Panzerwaffe I came across another tiger II SS-Untersturmführer Karel Bromman from 503.s.SS.Pz.Abt subordinated in April 1945 to the III SS Tank Corps. This ace has (according to most sources) 66 (65?) Tanks, 44 guns and 15 vehicles. He achieved his success mainly in Poland in the area of Gdańsk. At the end of the war he received the Knight's Cross.
However, most of the photographs show the decoration of the crew for the successes achieved in April 1945 near Bollersdorf (east of Berlin). The second tank in the picture (16 victories on the main) in the publication of W. Schneider is not assigned a commander. Judging by the decoration ceremony of the crew of SS-Hauptscharführer K. Körner to the left of this machine, it could be his tiger.


One of the great battles of the end of the war took place in the area of Bollersdorf.


He destroyed SS-Oscha around 10 o'clock in the morning. Müller (also Tiger II from 503.s.SS.Pz.Abt.) 23 Russian tanks between Grunow and Bollersdorf then retreated to replenish ammunition. His 5 tigers were replaced by another formation. A trio of kingtigers under the command of another of the es 503.s.SS.Pz.Abt SS-Hasch Körner. In this battle, the Russians wrote off a total of about seventy tanks.


At about 1 p.m., three kingtigers under the command of SS Hasch.Körner advanced in support of the attack with soldiers 23.SS.Pz.Gren.Reg. "Norge" towards Bollersdorf. Here Körner (as he describes in the book Loyalty is my honor) first came across two IS2 tanks (some sources state T34/85), one of which he destroyed at a distance of 200 meters. The other turned into a ditch in search of a suitable shooting position and maneuvering. He destroyed eleven other IS2 machines on the Strausberg - Bollersdorf route. First, it ignites the first and last tank from the column, then all the remaining ones. There are less than forty rounds left in the tiger's bowels. As they advanced, the kingtigers encountered an enemy group of about a hundred tanks. He fired all his remaining grenades in the constant turmoil of battle. SS-Hauptcharführer Körner destroyed 11 + 39 tanks in this fight, SS-Hascha. Harrer 25.


The last battle of the day took place between about two and four o'clock in the afternoon. A group of five tigers II attacked after replenishing ammunition and fuel in the area of the morning battle. Unfortunately, the outcome of the battle is unknown. SS-Oscha is in retaliatory Russian fire. Müller killed when a rocket from a "kite" hits his tank.


The final clash of the day at 5 pm was attended by three tanks SS-Hauptcharführer Körner and Kingtiger SS-Ustuf. Schäfera. It is said that in this last battle of the day, about thirty tanks were destroyed on the side of the Russians.


Overview of commanders of individual tanks mentioned in the action.


On April 20, 1945, Körner's tank is sent for repair to the Tempelhof (Krupp-Druckemüller plant). Tank SS-Uscha. G. Diers is repaired in Hönow near Altlandsberg. When welding on the tower, the tank even starts to burn.


April 21, 1945 - Transfer of the unit (remaining tanks) to Berlin. Two kingtigers (Körner and SS-Ustuf. Feige) destroy 15 of his tanks in a collision with an enemy. But that day is the SS-Ustuf. Feige killed when a grenade fired by a Russian tank hits the command tower and rips off his head.


The victory of 19 and 21 April probably could not remain underestimated in the last days of the war, so on April 28 at 10 pm Körner and Schäfer are taken to the bunker of the Reich Chancellery. The pair was accompanied by SS-Obersturmführer Lemke Adjutant 503s.SS.PzAbt. from the combat sector Berlin-Wilmersdorf. They were welcomed in the bunker by SS-Brigadeführer Mohnke.The next evening, the battalion commander 503.s.SS.Pz.Abt. SS-Sturmbanführer Fritz Herzig. Afterwards, Herzig, Körner and Schäfer were decorated in the presence of General Krebs with the Knight's Cross of the Iron Cross. The unit (rather the rest of it) was at that time deployed in Charlottenburg on the Neue Kantstrasse. Körner closes the top ten aces in the table. So much history.


A few pictures and the above show (fighting, fires during repairs, etc.) that the machines were very worn. A photo on the Internet from the "repair center" (April 20, 1945?) Clearly shows the three-color camouflage under the removed replacements. articles on the tower. The photo is not clear, but you can clearly see a few "dots" in a lighter color, ie ambush. The caption to the picture indicates that it is Bromman's (standing first from the left) tank. The ambush is partly visible on the second part of the fender. Even in this case, misinterpretation of colors would occur very easily. If the tank had attached cells to the tower and the image was cropped from the left side, the camouflage on the surface would be almost invisible. The intensity of camouflage colors is very low - I do not rule out that the tiger was painted white in winter (Poland). Traces of white are visible in the image. However, a clear color difference can be seen under the edge of the removed fender and in the part where the fenders overlap. So if it's really Bromman's tank


The question arises why Bromman has painted more victories than Körner? Is this kingtiger with 29 victories really Bromman's or did he just get on it to pose to a war correspondent?


Tiger II Ausf.B - commander of the SS-Untersturmführer Karl Bromman. 503.s.SS.Pz.Abt. April 1945. On the main 29 victories. Possibly Ambush camouflage - very worn (combat, operating fluids, washed white winter paint). Tower number - pp. Unpainted (?). The front part of the left fender is missing, the first part of the fender on the right side. Spare links on the right front of the tower.


Tiger II Ausf.B - commander of the SS-Hauptcharführer Karl Körner (?). 503.s.SS.Pz.Abt. The second half of April 1945. On the main 16 victories. Maybe Ambush camouflage? Tower number? Unfortunately, very little can be found about this machine. Occurs in only one image - only the barrel and the right part of the front armor are visible.


Tiger II Ausf.B. This machine is photographed in front of the Posdam Underground building in Berlin. Tower number is 10? (pp.101). The ambush scheme can also be seen on the tower. The tank has six victories on the main (white). Unlike the previous two but very thinly painted! The machine is interestingly camouflaged for combat in the city - streaks of dark cloth over the tower and conifer branches on the front armor. The pictures are in Broněkolekce 1x (2/2001, p.23), Tankomaster 1x (no.14 pp. 37, 5/2000) and Militaria 1x (p. 74, 206/2004). Possible color scheme in the publication in the Polish Trojca Tiger II. Labels indicate that the tank fought incorporated into the "Müncheberg" tank division. More information about the crew is not yet known to me. 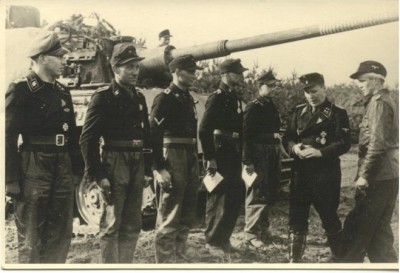 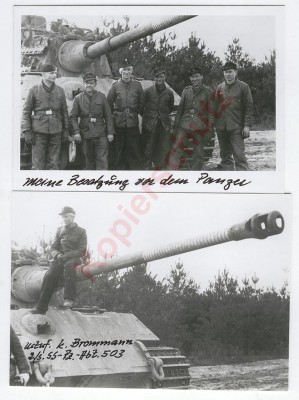 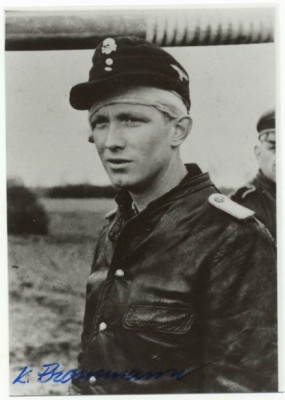 URL : https://www.valka.cz/Tezky-tankovy-oddil-SS-503-1944-1945-t40005#182900Version : 0
Dolin404 15 years ago
Still I would like to add images to the text. Regards Tiger II ss-Ustuf.To.Brommana where the tower stands ss-Uscha.Emil Reidiel, repaired machine ss-Ustuf.To.Brommana and the photo where you see the two head to head with the victories. The last picture is the tiger II I left back at the entrance to the Posdamského station in Berlin.
Valleys. 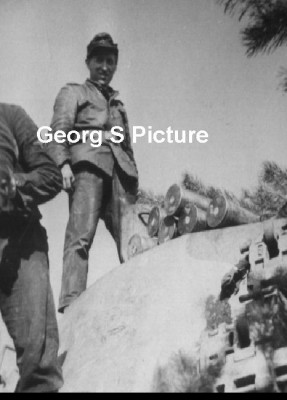 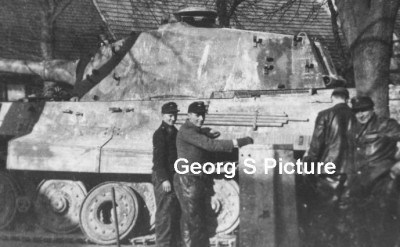 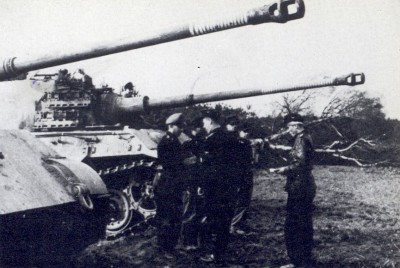 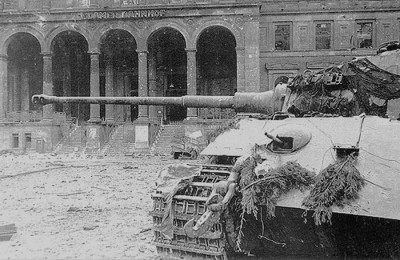