Czech legend in the English sky

The air offensive against Britain, which was to clear the English air force from the sky and open the way for the German invading forces to cross the English Channel, began on 13 August 1940 with the Adlertage, a concentrated strike of the 2nd , 3rd and 5th Air Force with a total force of 3,000 aircraft. they had about 750 Hurricane and Spitfire fighters available for defense. By August 31, German losses amounted to 215 bombers and 252 fighters, and the British 359 aircraft.

The problem on the British side was not so much the lack of machines, but the lack of trained air personnel. Therefore, Polish and Czechoslovak pilots were directly a gift from heaven, who fought their way to Britain after occupying their countries and defeating France. In agreement with the respective governments in exile, they were allowed to create their own national air units within the Royal Air Force - squadrons. They were mostly seasoned fighters with combat experience, so it only took them a few weeks to retrain for new aircraft. For example, the 310th Czechoslovak Squadron , established on July 10, 1940, took part in the first operational flight on August 17, and the Polish 303rd Squadron , which was formed on August 2, received its first " Hun " on August 30 during a training flight, before the combat flight. inclusion!

And in this elite unit of experts, in addition to twenty Poles, the Czechoslovak Josef František also fought. He was born in 1914 in Otaslavice in the Prostějov region, so he was not far from the aviation school in Olomouc . In his case, it was not a phlegmatic Hanák, but on the contrary an explosive, fiery and difficult-to-manage nature, which was much closer to the Polish temperament than the Czech cold-bloodedness. On May 20, 1939, he left illegally for Poland to fight for the liberation of his homeland, and in choosing whether to join the Foreign Legion or remain in Poland, he preferred the latter. After the invasion of Poland, he fought in the Polish Air Force and remained loyal to the Poles a year later in England. 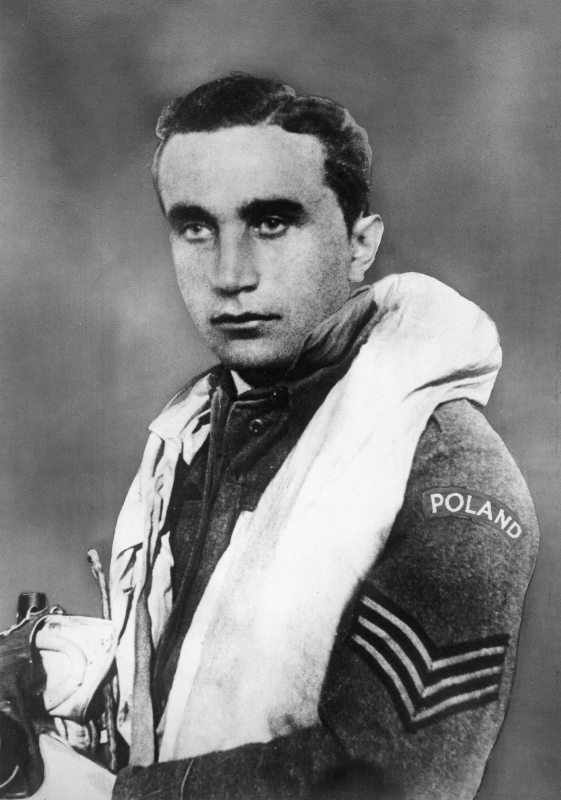 The 303rd Squadron in September 1940, when the air battle of England culminated, operated with its twelve Hurricanes Mk. Even from the Northold base west of London , and after Hitler decided to " decommission " the British capital with day and night bombing and air terror to destroy the British will to resist, she was in the air from morning to evening. On September 3, it took off three times and at 4.45 pm attacked a formation of German bombers over Dover .Sergeant František shot down the Messerschmitt Bf 109 E fighter and thus launched the line of victory, the equivalent of which can perhaps only be found in René Fonck or von Richthofen . On September 3, František takes down the second Bf 109, on September 5 Bf 109 and Ju 88 again , on September 6 Bf 109 and on September 9 Bf 109 and He 111 . He pays for it by an emergency landing, during which he crashed his damaged plane. September 11 makes up for it, gets three " Huns ", two Bf 109 and He 111. Then comes the critical day of the entire battle of several months - September 15, 1940, when the Germans throw into the air attack hundreds of aircraft, of which 56 lose for 26 British . These are permanent unsustainable losses, and Hitler is forced to postpone the start of the invasion indefinitely.

Of the ten " Huns " that " three hundred and three " received that day, František kills down a twin-engine Messerschmitt Bf 110 fighter. On September 18, František achieved his twelfth victory by shooting down the Bf 109, and by September 26, he already had fourteen. A day later, 11 Hurricanes of the 303rd Squadron fight 20,000 feet over London with 30 He 111 and 50 - 60 Bf 109. Ten Poles and one Czechoslovak are fighting well, compared to the loss of only two pilots shoot down 13 aircraft for sure and 2 probably. František, Bf 110 and He 111, two of them are credited. On September 30, 1940, by shooting down two Bf 109s, one certainly and the other probably, the Czechoslovak fighter ace achieves its seventeenth ( eighteenth ) and last victory.

To understand what followed, we need to return to the untamed nature of this born warrior. According to the testimony of his squadron commander, Witold Urbanowicz , František threw himself on enemy aircraft with the fury of a Viking berserker. He disregarded tactical orders, violated the principle of mutual coverage, according to which the pilot "guards the leader of the pair" " on the number ", and threw himself wherever a black cross flashed across the sky. Master piloting and a perfect shooting eye saved him from the risky situations he got into. The landing agreements were ineffective, and František acknowledged everything and promised to improve, but as soon as the wheels of his Hurricane detached from the runway, he turned into an unmanageable projectile, a lone wolf. Usually, soon after takeoff, he broke away from the formation, which was a blatant violation of the most basic principle of air combat, headed over the English Channel and there, with a blow of mercy, arrived German planes, which were towed to France. The situation was unbearable, but the Poles, who respected his " Polish " prowess, found a way out when they officially appointed Sergeant František a guest of the 303rd Polish Squadron and gave him a free hand.

Unfortunately, no one found, and could not find, a cure for František's next ailment. Enormous commitment, exceeding the allowed standard several times ( by default, the pilot could be deployed to the action only once a day ), led not only to physical, but mainly to mental exhaustion. At the " three hundred and three ", the worst was František, who seemed to be consumed by the inner heat of the warrior. At the warning of the squadron doctor, Urbanowicz, František's commander, began to think that he would ask that the exhausted guest be " grounded ", that is, that he would be temporarily banned from fighting. But death was faster. On October 8, 1940, when returning from an operational flight, František made a school mistake when landing, it was " long ", the plane crashed into a wall at the end of the runway and the twenty-eight-year-old pilot broke his neck. As with any legend he has become in the meantime, there are still controversies about his death. Alexandr Hess, the first commander of the 310th Czechoslovak Squadron, states in his memoirs that the pilot lost control of the machine in the air due to complete exhaustion, which then crashed. It would not be Poles not to give a more romantic reason - according to the Polish author Benaszcyk, after returning from a combat flight, František flew over his girlfriend's house, where he wanted to make a salute turn, and it was during which the plane crashed.

With his 17 certain victories, Lieutenant František ( posthumously promoted ) became the third most successful fighter in the air battle of England. Only F / Lt Loch and S / Ldr Kellar surpassed him with 20 kills. However, he was the best and most successful Czechoslovak pilot in the Czechoslovak and Polish squadrons until the end of the war. He was the first foreigner to be awarded the Polish Order of Virtuti Militari together with Krzyz Walecznych and the British DFM Medal.

He was a pilot who did not exist before and will not exist. He himself engaged in a duel with the predominance of the enemy. He flew alone, unexpectedly attacking the Germans. He was the best shooter - whenever he pulled the trigger of his machine gun, a German crashed down ...