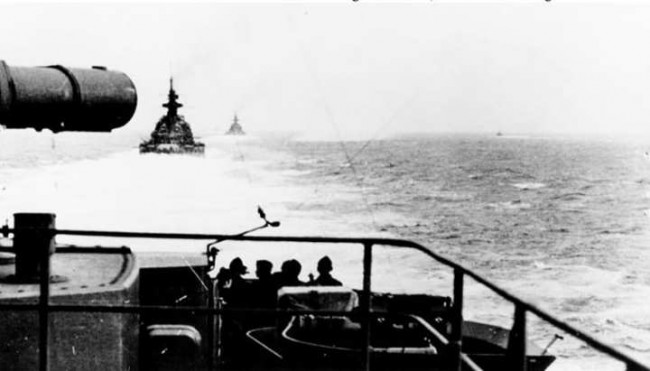 The German battlecruisers Scharnhorst and Gneisenau and the heavy cruiser Prinz Eugen, anchored in Brest after returning from corsair cruises, became targets of British raids that could sooner or later severely damage them. It was therefore decided to move them to Germany where they could be better defended. Hitler's lingering notion of an Allied landing in Norway also contributed to the move. He therefore wanted the ships closer to the north. In February, repairs were completed on the Scharnhorst, which had been damaged by an aircraft attack while trying to penetrate over the Atlantic. There were several routes that could be considered to get the ships to Germany:

Hitler had not had a plan drawn up by the staff of Grand Admiral Raeder to move all three big ships. He had long resisted the idea of moving the ships through the English Channel, but Hitler's arguments that sooner or later the ships would be just as badly damaged by enemy air raids finally convinced him. Hitler told a meeting of naval commanders that, based on past experience, he did not believe that British commanders could make lightning decisions, and he was right. 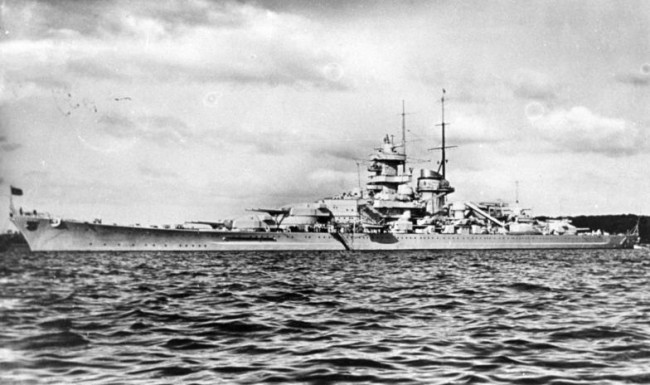 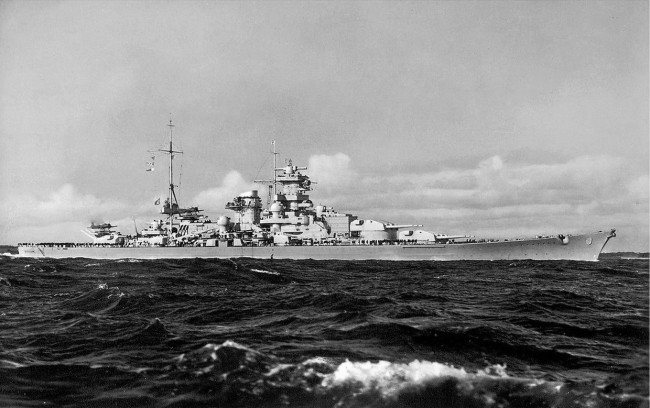 It was therefore decided to launch Operation Cerberus, to be commanded by Admiral Otto Ciliax, whose flag flew at the mast of Scharnhorst.

At the final briefing in the Wolf's Lair, Ciliax spelled out the conditions for the success of the operation:

In order to confuse the enemy, Ciliax had large quantities of clothing and tropical helmets ordered from a French firm. He told the merchant that the matter was top secret. In addition, he ordered several barrels of oil to lubricate machinery in the tropics. He knew very well that the information would reach the French resistance. It was like sending a telegram to the British Admiralty saying he was sailing for the South Atlantic. 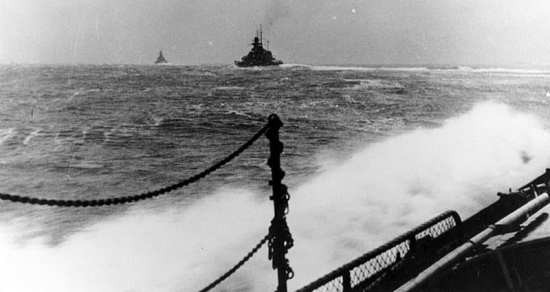 Another shot of Gneisenau and Scharnhorst during Operation Cerberus. While this was a tactical victory for the Germans, it was a strategic defeat as the ships were much less of an immediate threat when based in Norway than in Brest, France
www.defensemedianetwork.com

On the night of February 11, 1942, the Scharnhorst, Gneisenau, Prinz Eugen, and the destroyers Z29, Z24, Paul Jakobi, Richard Beitzen, Fridrich Ihn and Hermann Schoemann Brest. They set off on a journey to Germany. Around 9 o'clock they were joined by the torpedo boats T 2, T 4, T 5, T 11, T 12 from Le Havre. Around noon, torpedo boats T 13, T 15, T 16, Falke, Iltis, Jaguar and Condor from Dunkerque reinforced the fleet. The German convoy was not spotted until around 10am, but the pilot thought it was a British convoy and didn't even report after landing! It was not until half an hour later that another aircraft spotted him, but due to the radio ban he did not report on the enemy ships until 11am. Around noon, Ciliax entered the Strait of Dover. At 12:18, batteries began firing at the ships over Dover. The destroyers immediately laid down a smoke screen and the firing ceased. At 12:20, Dover and Ramsgate attacked with torpedoes from eight small ships (two Polish S 2s and an S 3), but the fire of the German ships' heavy guns prevented them from approaching. Even so, they damaged the Fridrich Ihn. Near Calais, six torpedo planes of the 825th Squadron of the Swordfish type attacked and were shot down by deck artillery or German fighters (the squadron was led by Captain E. Esmond. He was awarded the Victoria Cross for the brave attack in which he was killed). At 2:30 p.m., Scharnhorst ran into a mine that damaged the generator. Admiral Ciliax was forced to transfer command to the nearby Z 29. Around 15:45, British command coordinated an attack by World War I destroyers and aircraft of the type Hudson and Beaufort. The attack was a fiasco, with the British only managing to lightly damage two destroyers. At 19:55, Gneisenau also ran into a mine that exploded in the bow area, but the damage was repaired within 30 minutes. At 21:35, Scharnhorst struck a mine. Eventually all ships made it safely to Wilhelmshaven. 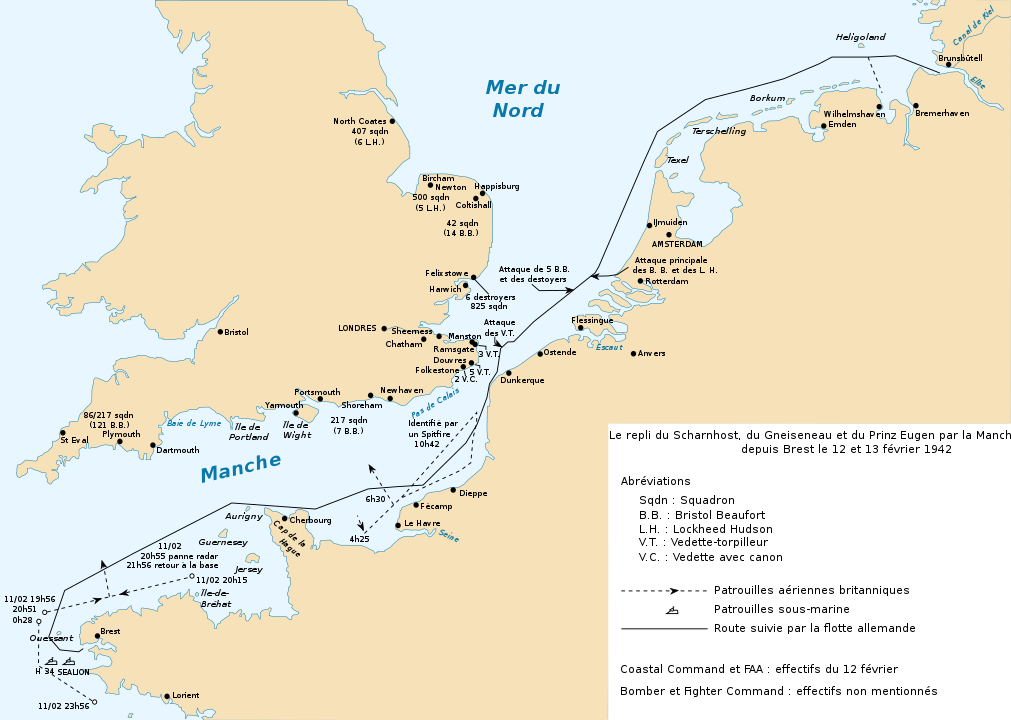 Cruise of Scharnhorst, Gneisenau and Prinz Eugen through the English Channel from Brest on 12 and 13 February 1942
commons.wikimedia.org

The Cerberus operation was a severe blow to the Royal Navy and to the air force, which dropped around 4,000 tons of bombs on the ships at Brest. British ineptitude was also severely criticized by the commander of the Northern Fleet, Admiral Golovek, who suspected the British Admiralty of deliberately letting the German squadron slip north, and therefore further away from US convoys to Britain.

On the German side, the success of the operation was attributed to Hitler's foresight and the ineptitude of the British commanders. Admiral Ciliax was awarded the Knight's Cross.