The French medium tank AMX-30 is considered a first generation tank. The shape and technology is similar to the German tank LEOPARD 1 or Russian T-62. The AMX-30 tank was one of the lightest medium tanks in the world at the time. For a very long time, it was the basic tank in the armament of the armored units of the French army.
The development of the tank began in the mid-fifties of the last century and the project was entrusted to the design office Atelier de Constructions d´ Issy - les - Moulineaux. The tank project was part of a joint development program of France, Germany and Italy. The aim of the project was to develop a new tank to replace American tanks M47, delivered from USA as part of the Mutual Defense Aid Program (MDAP) at the turn of the 1940s and 1950s. Each of the participating countries was to develop a prototype of its tank, and on the basis of tests and tenders, the winning type was to be introduced into the armament of all three armies. However, the joint project disintegrated for political reasons (France withdrew from NATO in 1963) and the parties decided to introduce each of their own types into service. France tank AMX-30 and Germany tank LEOPARD 1. Italy, which did not submit its prototype to the tender and waited for the result of the competition, was forced by circumstances to buy a license for the production of an American tank M60A1 and later a German tank LEOPARD 1. The first two prototypes of the AMX-30 were produced in 1960. The tank was included in the armament of the French army in 1965. Serial production began in 1966 at the plant of Atelier de Construction Roanne. By 1982, about 2,000 AMX-30 tanks were produced. About half of this amount was taken by the French army and the rest was exported abroad. For the needs of the Spanish army, the AMX-30 has been manufactured under license in Spain since 1974.

The tank is characterized by a relatively low silhouette, rounded, tortoiseshell-like shape of the tower, not very typical for tanks of Western construction. The hull of the tank is welded from rolled armor plates. The frontal armor is inclined and in the upper part passes into the flat ceiling of the hull. The driver's compartment is located in the left front part of the hull. The tank tower is made of cast armor and is located in the middle of the hull. It is equipped with a 105 mm cannon. In the right part of the tower is the station of the commander and gunner, in the left part of the charger. On the side of the charger, there is an opening in the tower for refilling ammunition and for ejecting empty cartridges after a shot. In the right part of the tower ceiling, the TOP7 command tower consists of ten periscopes located around its perimeter. It is equipped with a one-piece hatch and mount for an anti-aircraft machine gun caliber 7.62 mm. In front of the turret is an armored cover of the commander's periscope. At the rear of the tower on both sides are located two smoke grenade launchers. On the side walls of the tower are welded baskets for various equipment and crew equipment. The engine compartment is located in the rear of the body. The exhausts are located on the fenders above the drive wheels on both sides of the tank.

The armored protection of the AMX-30 tank is generally considered weak. Protects the crew from bullets from small arms, small arms and shrapnel from artillery shells.According to experts in tank technology, however, even the frontal armor is not able to withstand most types of current anti-tank missiles.

The chassis of the tank consists of five wheels on both sides of the hull, suspended by torsion bars. The first four wheels are arranged in pairs in two-wheel bogies, the last is suspended separately. The first and last travel wheel is equipped with a hydraulic damper. The drive wheel is at the rear and the tensioner at the front. The upper branch of the running gear consists of five support rollers on both sides of the body. The track has 83 links, weighs 1580 kg and is 570 mm wide. The length of the contact area between the belt and the terrain is 4,120 mm.

The tank is powered by a 12-cylinder water-cooled supercharged multi-fuel engine Hispano - Suiza HS 110 with an output of 536 kW at 2000 rpm. The engine can use petrol, diesel or a mixture of petroleum derivatives and alcohol as fuel, which significantly eliminates fuel supply problems during a possible war.
The engine of the tank provides relatively good maneuverability, but the tanks of the first production series were characterized by high failure rates. It was designed so that it could be replaced in the field by three trained mechanics in 45 minutes.
In 1974, a turbine engine of the GT 601 type was tested in one prototype of the AMX-30 tank. However, only one prototype remained and no further expansion of the production of this engine took place.

The propulsion system refueling consists of an automatic, eccentric, main clutch, mechanical transmission type 5SD-200D with 5 gears for forward and 1 reverse and triple differentials. In order to increase the torque, the drive wheels are equipped with double side transmissions. Gearboxes are made up of spur and planetary gearboxes.

The main armament of the tank consists of a GIAT CN-105 F-1 105 mm cannon, with a grooved bore barrel, made of magnesium alloy, with a thermal insulation shell and a length of 56 calibers. The cannon is not stabilized. It is equipped with a locking wedge with vertical movement. The brake return device consists of two hydraulic recoil brakes and a pneumatic gate. The elevation of the cannon ranges from -8 degrees to +20 degrees. The measurement of the whole tower is then 360 degrees. The drive of rotation of the tower and aiming of the cannon is provided by the hydraulic system CH-27-1S, which is able to rotate the tower around the axis (360 degrees) in 12 seconds.

The cannon uses ammunition of the type:

HEAT (High Explosive Anti-Tank) - cumulative projectile with rotary or arrow stabilization
This missile weighs 10.95 kg for the AMX-30 tank and leaves the barrel of the cannon at a muzzle velocity of 1000 m/s. The cumulative warhead is located inside the projectile and is equipped with a ball bearing, which reduces the rotation speed that the projectile gains when passing through the grooved bore of the barrel. This results in an increase in the cumulative effect of the projectile beam. The missile is thus able to pierce the perpendicular impact on the target armor with a thickness of 400 mm at a distance of 3,000 m.

APFSDS (Amor-Piercing Fin Stabilized Discarding Sabot) - anti-armored sub-caliber arrow stabilized missile with tracer
This type of projectile was introduced in the AMX-30 tank since 1981. The total weight of the projectile is 5.8 kg. The barrel leaves a steel projectile with a tungsten core in the shape of an arrow with a diameter of 26 mm and a weight of 3.8 kg at a muzzle velocity of 1,525 m/s. After hitting the target, it can pierce armor with an inclination of 60 degrees from a vertical with a thickness of 150 mm at a distance of 5,000 m.

In addition, the cannon can fire lighting or smoke missiles (type PH-105-F1). It can also use ammunition used by German tanks LEOPARD 1 or American tanks M60.
Driven firing range is 47 pieces of 105 mm caliber ammunition for the cannon with which 19 pieces are stored in the lower part of the tower and the remaining 28 pieces in the right front of the hull next to the driver's area.

For the first versions of the AMX-30 tank, the additional armament consisted of a 12.7 mm machine gun coupled with a 105 mm main cannon. Later it was replaced by a rapid-fire cannon GIAT M693 caliber 20 mm. In the case of arming the tank with this machine gun is a firing diameter of 1050 rounds of 12.7 mm caliber.

Additional armament of the tank consists of a rapid-fire cannon GIAT M693 caliber 20 mm coupled with the main cannon. It is used to destroy lightly armored enemy vehicles, or low-flying targets and is equipped with a two-way ammunition supply system. This system consists of storing two types of ammunition, each in its own belt on either side of the cannon end. This allows the shooter to select and deliver ammunition to the conclusion according to the nature of the target just fired. Its rate of fire is up to 7,000 rounds per minute and the independent elevation ranges from -8 degrees to +40 degrees. A separate elevation of up to +40 degrees allows the blasting of enemy helicopters in particular. The cannon is operated by a tank commander or gunner.

On the command tower is mounted anti-aircraft machine gun FN1 caliber 7.62 mm designed to destroy the enemy's manpower and low-flying targets. It is controlled by the commander. Driven firing range is 2070 rounds of 7.62 mm caliber.

The AMX-30 tank does not have an integrated fire control system or a cannon stabilizer. It is basically equipped only with optical devices designed to conduct fire. This significantly reduces the effectiveness of shooting, especially when moving.

At the command tower on the ceiling of the tower there is a panoramic aiming periscope of the commander type M-270 SOPELEM, equipped with a branch for day surveillance M267 with ten times magnification and a branch for night surveillance OB-23A with four times magnification.
The commander's station is also equipped with an optical rangefinder M208 with a range of 600 to 3,500 m. The command tower then has around its perimeter located ten permanent panoramic periscopes.

The shooter has an optical sight M271 with eight times magnification and a range of 2000 m. For operation at night or in reduced visibility, the shooter can install an infrared sight OB-17A with a magnification of 5.4x, which works in conjunction with the reflector PH-8- B, emitting in the infrared band. The reflector is able to work in the visible light zone and is mounted to the left of the anti-aircraft machine gun. The effective range of the sight at night is from 800 to 1,000 m. Furthermore, the shooter's station is equipped with two permanent panoramic periscopes.

The charger station is equipped with two permanent panoramic periscopes.

The tank driver has three permanent panoramic periscopes at his disposal. In the case of night movement, the middle periscope can be replaced by an active infrared device SOPEL OB-16-A.

The tank is equipped with a pressure filter ventilation device against WMD and an automatic fire-fighting device. It is able to wade to a depth of 1.3 m without preparation, with preparation to a depth of 2.27 m and with an extension for deep wading to a depth of 4 m.

Chris Bishop - The Great Encyclopedia of Modern Military Weapons, published by Svojtka in 2004 as the first Czech edition, ISBN 80-7237-863-5

Tanky magazine - collection of armored vehicles No.2 published in 2007 by PRESS-PYGMALION in Český Těšín 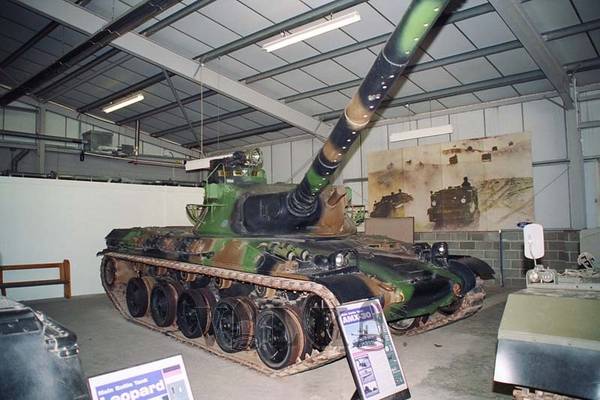 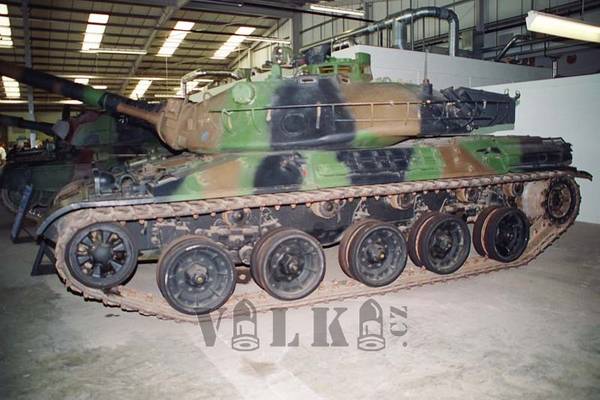