P-700 Granit is a modern missile with cruise missiles (wing rocket in the original terminology) designed for combat by the opponent at a great distance, and especially with the aircraft carriers and the most important ships of the maritime unions. Missiles can also be used against coastal targets, even with a conventional warhead. The main pros missiles are high speed and the small height of the flight, long range and very high quality guidance system.

The development of this missile was conducted in OKB-52, or if the KBM (KB mašinostrojenija, Design office of mechanical engineering), the main designer of the KBM was Vladimir Čelomej, since 1984 Gerbert Stockton. Development began in 1969. In 1970, he had completed the preliminary project. Trials began in November 1975 on the ground the stool and ended in August 1983. From December 1980 carried out tests of the submarines of project 949. 12. march of 1983 was a complex of Granite was officially accepted into armaments.

At the beginning of the development was assessed about 10-20 possible configurations - different implementation of the missile and its systems, ways of deletion. Individual variations were evaluated in terms of achievable performance, practicality and efficiency in combat. According to some sources, an important task was to eliminate problems with the body of the previous missiles P-500 Bazalt (SS-N-12 Sandbox). One of the problems was to ensure information about targets for missiles with great range, which the carrier has not been able (within range of its systems is limited by the radar horizon). As solution was chosen the communication with cosmic intelligence satellites - radar and radiotechnickými, which should supply information on the possible objectives for carrier missiles and ground-based centres. The calculations of appropriate pathways and the position of the satellites available for this task participated in the team of academician M.In. Keldiše. Space reconnaissance system was originally marked US, formally, was his financing of the approved 21. July 1967, satellites were taken out with missiles R-36. Submarines and ships of the him gaining the information using datalinku (satellite-ship) Kasatka (Punch Bowl).

Power is provided by a supersonic turbojet engine KR-93 located in the tail of the projectile, which has developed a design office Ufimské motorářské production association, UMPO under the leadership of Sergei Gavrilov. The maximum speed of the missile is Mach 2.5 at high altitude and Mach 1.5 in a small. The trial variant of the missile with a supersonic náporovým engine 4D04, developed in OKB-670 under the leadership of Mikhailo Bondarjuka reached speeds of up to Mach 4. In the end portion of the shot to one of the flight engine also located here with starting the engine on a solid fuel, which starts to work under water. The missile can be discharged from surface vessels and submarines (even submerged).

The flight speed of the projectile is such that after firing are not necessary course corrections during the flight to the target, as is common with other missiles with great range. Another factor that allows the deletion of a correction in the middle stage of flight is obviously a sophisticated algorithm to search the goal. The submarine, therefore, the shells can emit submerged, according to the information received from the satellite system via datalink Kasatka (Punch Bowl). In the case of launch from surface ships may be the missile tracked the ship's radar, in addition, it is equipped with a data link, through which back to the carrier sends the ISAR image of the target area (this datalink is not used during launch from a submarine).

There are two focusing head - passive radar (shot focuses on radar targets) and active radar. It is believed that the main objective of the variants with a passive radar by entering the are us ships with the Aegis system, wherein information about the signature (image) to the target radar receives from a radar reconnaissance system, which is equipped carriers of this missile. This system can be MP-404 (Rum Tub), or his successor (apparently the MP-405/MP-407, Wine Glass, Football ?). Head with classic active radar guidance can during the flight to switch to the passive mode, it is less sensitive than standard passive radar variant.

On-board autonomous control system of the missile is based on the tříprocesorovém computer, which processes information from multiple channels, which allows him to better evaluate the current situation. The system was created by a team of CNII Granit, under The leadership. In. Pavlova.
The missile uses a number of different trajectories, according to the operational and tactical situation on the battlefield. Missiles can be used against lone targets, so against a group of ships. The usual tactic to use is one shot - one goal. In a special mode, in formation flight one shot works as a search engine goals - it is flying at a height so that the captured targets on the largest possible area. The other missiles in formation on the contrary, flying low, taking shots for the flight continuously vyměnují information about the objectives. If it is shot, functioning as a search is destroyed, one of the other missiles automatically takes over its function. The missiles themselves will divide the objectives and chooses the tactic of attack.
To eliminate the error in the selection of the type of maneuver and attack against the target, are in the onboard computer missiles stored information about the known classes of ships. They are, for example, the tactical information about the location of ships in the group (aircraft carriers, escort ships), which then allow you to shoot correctly select the most important ship of the group. Furthermore, the computer stores information about the systems electronic warfare which the enemy has available, and also the tactical information about the ways of penetration of its air defense. After the launch of the missiles themselves evaluated, which of them think which of the objectives and what maneuvers you need to choose for completion of the task. On-board computer, the missile selects the appropriate procedure according to the pre-programmed algorithm. After the destruction of the main objectives in the group the remaining missiles to attack other ships, while shying away from the fact that the two missiles attacking the same target.
The missile also has a means for averting her attacking interceptors. In the opinion of the officials of the Russian navy VMF is virtually impossible Granit shoot down, thanks to its high speed, the profile of the flight and maneuver capabilities.

From the end of the 90. years 20. century KBM is trying to modernize the missile Granit, the new variant is referred to Granit 2.

The missile is in service with the submarines of project 949 Granit and 949A Antej (three submarines of project 949 and nine 949A), the chief designer of P. P. Pustyncev (since 1977 E. L. Bazanov). Between the submarines of project 949A belonged to for the record also known Kursk.
Submarines carrying 24 launch tubes, SM-225A, which can carry cruise missiles Granit 3M45 or missiles 3M15 and allow you to launch them above and below the water. Launchers are placed in the container of the PL, that is directed obliquely upwards under a fixed angle. Inside the container of the PL is then longitudinally stabilized container with a shot, which is to the walls of the container PL attached until now to the control of the transverse absorption. Until now are found in the dry, hermetizovaném space within the walls of the two containers and the two rubber covers.

The atomic cruisers of the project 1144 jnesou 20 shots Granit in separate holds discharge devices SM-233. Between these vessels include, for example, the former Kirov (Admiral Ushakov) or Petr Velikij (ex-Yuri Andropov). The project 1144 used launchers SM-233 (developed KB special engineering), which are placed at an angle of 60 degrees. These have been developed according to the requirements, which included the unification and the takeover mechanism launchers SM-225 of submarines of project 949, and also improve the reliability of the missiles during launch by using a simplification of the starting sequence. The missiles are carried under the deck of the ship in four rows of five missiles, stationed in the central line of the ship. On-board layout of the ship is adapted to enable a safe start and overcharging shots. The ships were equipped with missile ship from the manufacturing plant of MTL fully odzkoušenými, which sped up the incorporation and subsequent tests on our own ships. The protection of marine bodies is ensured by the hydraulically operated retractable covers. The opening and closing of the covers is controlled by cyklogramy, corresponds to the number of launched missiles. The board and the housings are ready sites for the location of the on-board charging device.

Other ships armed with missiles Granit is a fleet cruiser project 1143.5 Admiral Kuznetsov (ex-Riga, Leonid Brezhnev, the Tbilisi, the principal designer In. F. Anikijev), that has 12 missiles in launch devices SM-233A. Work on the firing device SM-233A for the ship project 1143.5 started 5. February 1982, the goal when the building construction was to improve the characteristics of the previous version of the SM-233. The main intention was to overall simplify the design and reduce the number of mechanisms, further reduce the proportion of metal components, simplifying maintenance, reducing the number of interconnections between the wind devices, and systems carriers. The main intention behind these changes was to increase the reliability and the simplification and cheapening of the production of maintenance. The admiral Kuznetsov is carrying 12 launchers with a fixed tilt angle, located under the deck. The internal arrangement of the containers with shells is similar to that of submarine variants, the top is a hermetic housing, moreover, is launchers camouflaged cover against radar radiation.

The range complex is about 20 to 500-550 km, the maximum speed is 2.5 Mach, the altitude is 14 meters up to 14 000 meters, a launch weight of over 7 tons. Fuselage length of about 10 meters diameter 0.85 meters, a span of 2.6 meters.
Warhead: nuclear, with a force of 200 or 350 kilotons, or 750 kg of high explosive. Another variant is the submunitions (applicable even against ground targets), when the missile carries 750 pieces of bombs with a weight of 1 kg, the bombs are of different types. 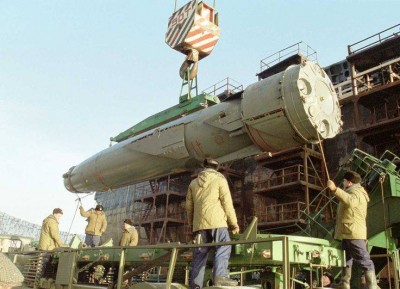