URL : https://www.valka.cz/Bayerlein-Fritz-t31732#404855Version : 0
Radoslav Turik MOD 10 years ago
URL : https://www.valka.cz/Bayerlein-Fritz-t31732#422195Version : 0
RoBoT MOD 9 years ago
Fritz Hermann Michael Bayerlein was born on 14. January 1899 in the Würzburg. 5. July 1917 he entered as a cadet into the service to 9. bavarian infantry regiment "Wrede", and after completing basic training he became involved in the fighting on the western front. At the beginning of 1918 he was transferred to 4. bavarian infantry regiment. For the repulse of the british attack was 30. August 1918 he was awarded the Iron cross 2. class. The following day he was wounded by shrapnel of a grenade and sent to convalesce in Germany. In mid-September he was transferred to the cadet school in Freising and after the conclusion of the armistice he returned to his 9. regiment. In may 1919, then was admitted to the Reichswehru to 45. the infantry regiment. During the 20. and 30. years he served in the 21. infantry regiment and graduated from a variety of infantry and staff courses. In April 1935 he was already in the rank of captain assigned to the staff of the Artillerieführer In, which was in October of the same year, transformed in the crew 15. infantry division. As the commander of the 2. company 6. kulometného battalion participated in the invasion of Austria. 1. June 1938 he was promoted to major, 10. November he was transferred to the staff of the XV. army corps and from 1. April 1939 he served as operations officer on the staff of 10. panzer division he graduated from the Polish campaign. 27. September 1939 he was bestowed the Iron cross 1. class.
During the western campaign was included in the staff XIX. army corps, 1. September 1940 he was promoted to lieutenant colonel of the general staff and the initial phase of operation Barbarossa was spent as the operational chief of the Panzer group 2. After the completion of the Kiev operation was at the end of August 1941 recalled from the eastern front and 5. October 1941 he was appointed chief of staff German african corps. For command performances during the fighting at Sidi Rezegh and the retreat to El Agheily in November 1941, received 26. December 1941 Knight's cross of the Iron cross. 1. April 1942 was followed by promotion to the rank of colonel on the general staff, and 23. October 1942 the awarding of the German cross in gold. From 7. December 1942 he served as chief of staff of the Panzer army Africa. 1. in march 1943 he was promoted to first general's rank and a week later he was appointed chief of staff 1. of the Italian army. Shortly before the surrender of the German forces in Africa was a major general Bayerlein air evacuated for diseases of the muscle rheumatism and jaundice to Germany. 31. may 1943 was included in the backup OKH and 6. June he was for merit during the african campaign awarded the oak twig to the Knight's cross.
In October 1943 returned to the eastern front, where he commanded the 3. panzer division during the defensive battles in the Ukraine. Contrary to Hitler's orders he was able to division out of the encirclement at Kirovogradu, for which he was later awarded in the daily report of the High command of the Wehrmacht.
10. in January 1944 he became the first commander of the newly formed Tank instruction division. The division was in march 1944 moved from France to Hungary for fear of betraying the Horthy government. Bayerlein supported the cardinal Serédiho in his efforts to prevent the deportation of Hungarian Jews. Later they were in the cardinal's diary, found laudatory mention of the general's humanity. In may, the division returned to France and in the area of Le Mans expected allied invasion.
6. June 1944 at two o'clock in the morning received lieutenant general Bayerlein information, that through the Channel would go across the invading fleet. Only at five o'clock this afternoon received orders to move the division to the north to Caen. His request to wait with the move until nightfall was rejected. The division therefore went out in the daylight, as ordered, and in the night the allied air force has prepared about twenty to thirty vehicles. To move 150 miles to the coast it took the division 2 days, and the fighting could involve up to 8. June, weakened and ratty-assed constant bombardment.
In the following weeks, the division participated in heavy fighting in the the Bayeux tapestry, Tilly-sur-Seulles and Saint-Lô. After the retreat of the battle of Normandy suffered heavy losses in the pocket of the Falaise. When they finally decimated the division withdrew across the river Seine, has been sent to rest and regroup to Germany. Bayerleinovo command of the art of Normandy was (for the second time) mentioned in the daily report of the High command of the Wehrmacht and 20. July appreciated meči to the Knight's cross.
Bayerlein commanded the Tank instruction division even during the last great German offensive in the Ardennes. In mid-January 1945, the forward command of general Niemackovi and at the end of march took over LIII. army corps, which he commanded until his encirclement in ruhrském the boiler. After heavy fighting he decided to negotiate with the Allies the surrender of the and 15. April 1945 took its troops into american captivity. The rest of the German troops in ruhrském the boiler gave up a day later.
During their stay in captivity until release 2. April 1947 he collaborated with allied military historians. This, and also the surrender in ruhrském boiler, earned him hostile reactions from former colleagues among the German officers. After the war he devoted his publishing activities, he continued to work with the historical department of the US Army and as an expert consultant participated in the filming of the movie "Guns of Navarone".
Fritz Bayerlein died 30. January 1970 in his native Würzburg on the consequences of the disease or in north Africa. 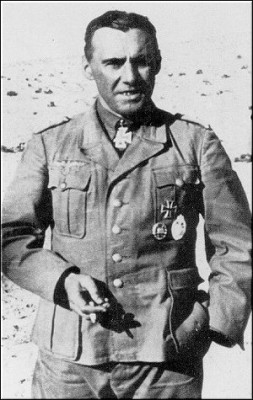 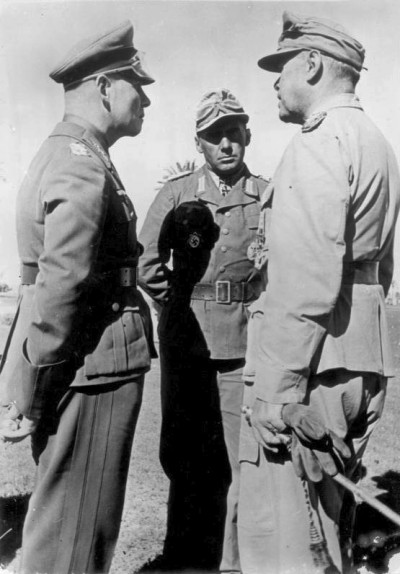 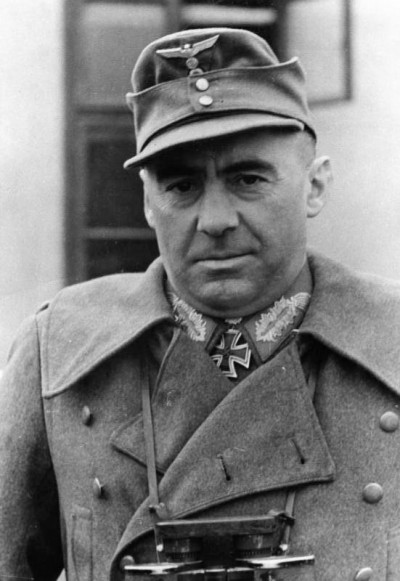