URL : https://www.valka.cz/Boeing-XF7B-1-t123750#421374Version : 0
Aubi MOD 9 years ago
6. December 1932 announced the navy specifications for a new carrier-based fighter aircraft, for which the company Boeing has proposed its Model 273. He was selected from four proposals and 20. march, 1933, a contract was signed with the navy. He was special for Boeing and the navy right away from several reasons - it was the first Boeing since the beginning of the variable pitch propeller, the first Boeing equipped with flaps, and the first low-wing plane with samonosným wing, closed kabonou and zatahovatelným gear offered by the navy. Model 273, which was designated as the XF7B-1, represented in large part the modernisation of the army the P-26 very similar Model 264 stavěnému for the army air force, which was but slightly smaller. During factory test flights it was decided to replace the original fairing of the engine in the style of the P-26 a new wide ring of NACA and because of the better cooling was removed also the front cover. Disappeared also aerodynamic transitions, located behind the wheels of the chassis, and which eventually caused greater resistance than the of the wings protruding wheels. When he was almost after two months posted on the test airfield of the navy in Anacostii, he stopped first in Hartford, where he was the company Pratt & Whitney modified the engine. 11. November 1933 was the XF7B-1 delivered to the Anacostie, where a few days later began the tests. The new Boeing showed satisfactory performances in terms of speed and dostupu, as well as the expected worse rate of climb against the previous dvouplošným types. Problem, but accounted for a high landing speed, around 125 km/h, limited view from the narrow enclosed cabin and a slower response of control.

In April 1934, he was the XF7B-1 returned to the factory, where he underwent navy required adjustments - After the model of P-26, which shared the same problem with the high landing speed, got odštěpnou flap along the trailing edges of the centerplane, which could reduce the landing speed of up to 106 km/h. Original closed cab was also replaced by a classic open cockpit. It solved part of the problems that the navy with the XF7B-1 was, but still criticised agility and that to start he needed in a diameter of 109 meters.

In march 1935 he was subjected to the standard test, when should the pilot at 6100 meters go into a dive at full throttle, around 2400 meters then the machine pick up, while the expected overload 9 G, which was to verify the possible structural defects. During the descent but snapped the front glass and the shards cut the pilot in the face and he missed the right moment. When he finally started the machine levy, has already reached the speed of 667,9 km/h and the subsequent overload of 12.1 G. Still fully controllable machine then landed safely. although the damage caused by the overload were serviceable, the air force is due to the need of further development before it will be XF7B-1 suitable for mass production, decided to prefer the program to terminate and stay so far at the dvouplošných types, and the machine was spot repair scrapped.. 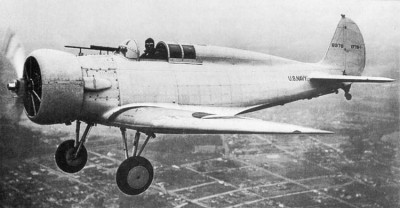 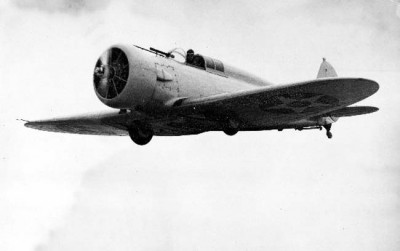