The commander of the 2. battalion 1. čs. a separate tank brigade in the USSR, Hero of the Soviet union

He was born 11. September 1911 in Postřekově, . Domažlice and after attending 2 classes lower industrial school in Plzeň he worked as a designer and construction assistant. In Pilsen in November 1933, he joined the basic military service in the school for health non-commissioned officers. In the spring of 1936, however, was discharged from the army on a permanent vacation, and until the mobilization in 1938 he worked as a construction supervision on the construction of border fortifications.

After the occupation of Czechoslovakia he was deployed on construction work in Germany, where he succeeded in July 1939 to flee and cross the border to Poland. There in August joined the czechoslovak unit in Bronowicích, he was at the beginning of the war captured by the Red army and briefly interned. In the spring of 1940 he entered the Eastern group of the czechoslovak. army in Orankách and later in Suzdal, where he was later selected for the instructor of the newly-forming czechoslovak military units in USSR. 8. February 1942 was in Buzuluk promoted to the rank of corporal, and after he graduated from the school of the platoon commanders, was sent to a special parachute course for the special group for the deployment on the territory of the Protectorate of Bohemia and Moravia. Due to the situation on the front, however, this mission has been repealed and training by prematurely terminated. In the rank of staff sergeant was in January 1943 as the commander of the 3. platoon 1. company 1. čs. a separate battalion in the field posted to the front, where at the beginning of march 1943 had a fighting baptism in Sokolova. For bravery in battle he was awarded the Czechoslovak war cross 1939 and Order of the Red star and promoted to officer rank. He married a woman of a csl. unit Naděždou Petruščákovou, but the marriage was after the war elaborated.

When in Novochopersk began in the summer of 1943 to shape the 1. čs. a separate brigade, he was appointed commander of the platoon of medium tanks T-34. His company then took part in the liberation of Kiev, for which he was awarded second Czechoslovak war cross 1939 and together with R. Tesaříkem and And. Crowbar received Gold star of Hero of USSR. From February 1944, in the rank of lieutenant he commanded the tank of the course of the brigade, and in June 1944 became commander of the 2. battalion of the newly formed 1. čs. samost. tank brigade. In this function passed combat operations at Dukla and in Silesia. His combat path finished in the rank of captain in march 1945 in the Region.

After the end of hostilities in may 1945 as a staff captain became the commander of the tank brigade in vysoké Mýto and in the Těšín region. In the autumn of the same year was sent to the Military academy of tank and mechanized troops into Moscow, but for the finding of tuberculosis had to go back and get treatment. After that, as an officer of the occupation in the spring of 1946 he returned to 1. tank brigade in vysoké Mýto as deputy commander. The second time he married with N. Havrlantovou, with whom he had two daughters. In the following years changed several features of the tank troops in Moravia, than he was in April 1948 forced for health reasons army to permanently leave. At that time, was already monitored by the military counter-intelligence and after a controlled provocation was arrested in November 1949 and imprisoned. In December of the same year, he was then on trumped-up charges sentenced first to 10 and on appeal to 14 years in prison. For deteriorating health status, was placed in a Military hospital in Olomouc, where he managed with the help of friends and family to flee abroad. After undergoing treatment in Germany, where in 1955 he traveled to Great Britain. There after he worked as a designer and became heavily involved in the activities of exile organizations. In August 1968 to protest against the occupation of their country by the armies of the Warsaw pact back all the soviet honors at the embassy of the USSR in London. To his homeland he was allowed to return only in 1990, when he was fully rehabilitated and promoted to the rank of major general. He died 30. June 2002 in Northhamptonu in the Uk. 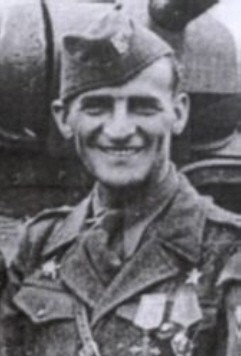 URL : https://www.armedconflicts.com/1911-2002-t33186#120123Version : 0
Vladimír Šilhán 15 years ago
Stem number in the conscription in Buzuluk: 48/m
Czechoslovak war cross 1939 he was awarded a total of 5 times. Furthermore, he received the soviet Order of Lenin and Sokolovská commemorative medal

A small addition to the place of birth usually gives the Old Postřekov, but this village is today part of Postřekov (near Domazlice - this is most likely not used - in the republic there is only one )..
URL : https://www.armedconflicts.com/1911-2002-t33186#131595Version : 0
Dav 14 years ago
Destiny honors general Joseph Buršíka

The last day of June of the year 2002 died in the british Northhamptonu at the age of 91 years, major general Josef Buršík, one of the heroes of the second world war. Yet his name has disappeared in the poúnorovém Czechoslovakia for many years from books, magazines, historical papers, essays, and photo.

Twice he had to in life to run from a totalitarian regime, twice returned. In 1991 finished his memoirs in which he expressed his faith in democracy - for which many times put his own life - and its development in a free Czechoslovakia.


Remembered also with a sense of bitterness for the year 1950, when it was under section 1, paragraph 2 of act no. 231/1948 Coll. In a trumped-up trial sentenced for the crimes of high treason to penal servitude for 14 years, to a loss of all honours and honorary badges, to confiscate half of the wealth, etc. What happened to his medals, however, the general Buršík didn't know, as he himself indicates:

"On Saturday and Sunday drove my wife to her mother in Klenčí. One day she found out that the apartment was for her the absence of the searched. Lost a greater amount of home furnishings, cut glass, valuable porcelain, all of my decorations and most of the paper documents. I came so by Order of the brotherhood of Yugoslavia, the Romanian order of Corona Romanieli the Gold star of hero of the Soviet union. I've often wondered, in the pocket of which the communist bosses it all ended, but I guess I'll never know".

On the basis of the documentation the Ministry of national defense (hereinafter referred to as MNO) can reliably determine their fate. A medal was confiscated on the basis of a court order and was not stolen, as has happened in other cases. They were issued a receipt from mjr. Rich of 5. department of the army headquarters took over on the MNO honors škpt. Joseph Buršíka on 24.07.1950 škpt. Bartoněk.

It was also submitted by the medal "Fidac"

(note: in the transcript left the authentic spelling)

To 19. November 1959 sent the deputy chief of the cadre administration WELL colonel. Ing Ant. Friedrich under ref. 055321 soviet medal, which was taken from the former škpt. Josef Buršíkovi during his arrest, the military staff of the CZECHOSLOVAK republic in Moscow with a request that the medal was dedicated to the main political administration of the Soviet army, which, according to the communication from the military attaché in Moscow, ref. 1125 from 05.05.1959 with the return of the orders and medals he agrees. In the annex is presented the list:

From the list of shows that he is lost somewhere the Order of the red star, to Moscow was sent just a card to him. The document was drawn up in three copies, under no. 2 was stored in the personal file of J. Buršíka.


Note:
Other decorations are not documents. Josef Buršík those soviet honours renounced in 1968 at the soviet embassy in London. For promotion to the rank of major general by the president of the republic of Václav Havel 05.10.1990 with soviet decorations neozdobil. When in the course of their visits to Czech republic on his uniform once again shone the Golden star heroes of the USSR and two soviet orders of magnitude in natura.


Posted with permission of the author Mgr. Květoslava Growky. Appointed as an employee of the State district archive in Jeseník deals with faleristickou and regional history. 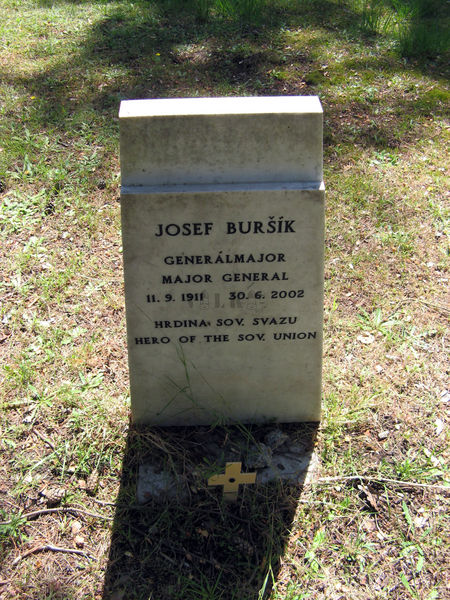