URL : https://www.armedconflicts.com/Burstyn-Gunther-t173219#514558Version : 0
RoBoT MOD 6 years ago
URL : https://www.armedconflicts.com/Burstyn-Gunther-t173219#514658Version : 0
RoBoT MOD 6 years ago
Gunther Burstyn was born as one of three sons of Adolf Burstyna and his wife, Juliane, née Hoffmannové. His father came from a jewish family from Lviv, but converted to the catholic christian faith. He worked as chief inspector of the austrian railways, his wife made her living as a journalist. One brother held the office of prime minister of the council, another was a distinguished professor of electrical engineering. Gunther studied at one of the viennese schools, but most likely a family predisposition to the technical science to get the move in 1895 to an engineer cadet in the Hainburgu. In 1899 he was eliminated and he joined as a cadet to the the Railway and telegrafnímu regiment. In may 1906 he was promoted to the rank of first lieutenant and in November of the same year assigned to the ženijnímu headquarters in Trento. In 1910 he married Gabriele Wagnerovou, with whom he had two children. In the context of marriage converted Burstyn from the catholic christian church the evangelical.

In 1911 he came Burstyn with the layout of the motorized cannon (Motorgeschütz). So it sounded to his label for the machine that has the belts, a hull with an internal combustion engine, a relatively spacious rotating turrets, quick-firing gun in the turret as the main armament, two machine guns as auxiliary armament, protective armour and the ability to overcome terrain obstacles. It was the first draft of what we today know as the tank. Burstyn its proposal presented to the leadership of the austro-Hungarian and German army, but was rejected. During the first world war then he has worked mainly in the construction of railways and bridges.

In the interwar army Burstyn served in the War museum and then it was as head of a military building council under the Ministry of military affairs pověřován different ženijně technical tasks. In 1933 was because of vision problems retired in the rank of general building of the council, with the result that he had to his son to terminate the study, since it continue to could not promote of the officer's salary. In the thirties he became an active member of the Patriotic front.

The leaders of the German armed forces have Burstyna respected as a pioneer of a tank in combat. Didn't only the first tank, but he is also the tactics of their deployment and whether or not the defense against them. The nazis in his case upozadili the fact that he was according to the nuremberg laws half-jew and label him as a honorary aryan. In march 1941, he might even Hitler personally showcase his armored raft designed for amphibious operations, for which he was even awarded a war if the merit cross with swords. The honors gave him the general Guderian.

In December 1941 fell on the eastern front, his son Walther. In 1944 he the vienna Technical university has granted an honorary doctorate. However, with the approaching end of the war Burstyn prone to depression, he was almost totally blind and because of his wife's illness he could not escape to his native Bad Aussee. 15. April 1945 he committed in Korneuburgu suicide. His wife was about five days later found dead, while apparently died a violent death.

Since 1967, bear his name barracks tank school in Zwölfaxingu. In 2011, the Vienna military museum, has put a mock-up Burstynova tank, which was built according to his patent from 1911. 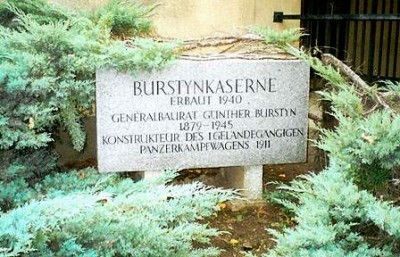 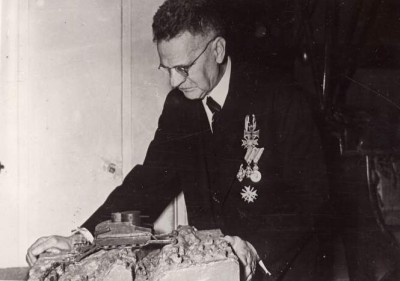 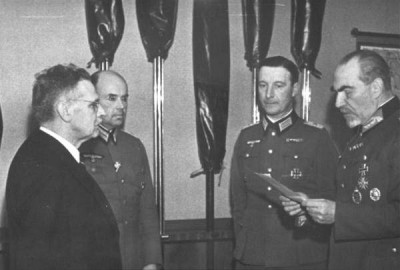 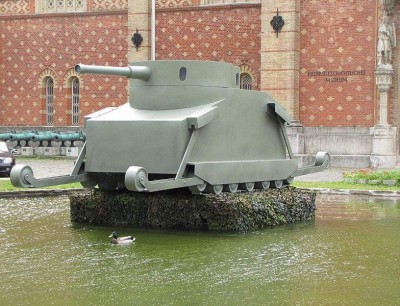