"an Old friend of Clostermannovy book the Big circus


Franz Ferdinand Colloredo-Mansfeld was born 1. in march 1910 as the son of the austrian diplomat, count Ferdinand Colloredo-Mansfeld and his wife, countess Colloredo-Mansfeldové (native American women named Nora Iselin). Part of childhood spent in a related branch of Colloredo-Mansfeldů in Zbirohu at Rokycany in western Bohemia, but otherwise most of the youth up to the departure of entire families to the U.S. he stayed in Vienna (thanks to the action of the family in the U.S. and american mother is the Colloredo-Mansfeld, some strands counted as an American). In the United states studied the Harvard university, which successfully ended in 1932. During his studies he also met his wife, Mabel Bradley, of which after the marriage become the next countess Colloredo-Mansfeldová and that the husband's retirement Great Britain gave birth to three children. This is the Colloredo-Mansfeld different from most other pilots, who served in the RAF, as in particular the British were, as is well known, mainly young "hares" without families and, therefore, without significant liabilities, which would have forced them to protect mainly yourself. The more it stands out Colloredo-mansfeld's courage, when, after the Anschluss of Austria (1938) goes to Great Britain to serve as a pilot in the RAF, in contrast with the vast majority of their countrymen, who fought mostly in the ranks of the Luftwaffe (such as Walter Nowotny, Maximilian Stotz, Hartmann Grasser and others).

In 1942, it is relegated to the status of 72. squadron from the airport Biggin Hill, in which 5. June 1942, her first success by shooting down (he was recognised as likely) Messerschmitt Bf 109. Shortly after was the squadron re-equipped with from the the Spitfire Mk. Vb, respectively. Mk. Vc on the new Mk. IX and at the end of the year via of Gibraltar moved to North Africa.

Colloredo-Mansfeld remains in England, is promoted to Flight Lieutenanta and moved to state 611. squadron in which gained the reputation of the esa with leadership skills. At that time the RAF was starting to clearly pass into the offensive and by that also changed the role of the fighters, of which the majority was used to protect bombers attacking Germany. So it was at 611. the squadron, whose fillings were the accompaniments so well described in Clostermannově book. 13. January 1943 Colloredo-Mansfeld, shooting down his first Focke-Wulf Fw 190. In writing about the course of the battle, we learn:

"I was flying as yellow 1. When we were south of Abbeville, C.About. told that they were the bombers attacked. The wing is sharply turned towards the port and continued to scan the area. At a height of approximately 12 000 feet, I saw three Fw 190 flying at approximately 5,000 feet below me, toward the port. I pointed out to C.About., curled up with his back to the sun and attacked střemlav from the sun. I opened fire at 500 yards, but I wasn't sure of the outcome. Then two of the Fw 190 is turned from the port and I watched the third, which did not shy away from action. At 300 yards I opened fire and continued until very close to when I had to because of the risk of collision violently suppress and escape right up. The Fw 190 continued in the fall and leaving behind black smoke. I followed him until about 5000 feet. I haven't seen him vybuchout, but all confirmed S/Ldr. Armstrong (Red 1). I claim, therefore, shooting down one Fw 190."

Other successes followed quite regularly: 5. February 1943 damaged the Fw 190, the next day he was another Fw 190 granted as a likely victory, 14. march granted the damage to the Fw 190, 17. may be granted as probable, and later a confirmed kill once again the Fw 190. 10. June he shot down another Fw 190:
"I Flew like a white 1. While patrolling for bombers, I noticed two Fw 190 at about 1000 feet below me. Slight right downward corner I turned back and fired a second dose from a distance of 200 yards at a moment when the back of the enemy aircraft began to rise sharply. At the roots of the wings he fanned the flames rising against the cabin up into the cockpit. Enemy aircraft declined, first slightly, but gradually more until the fall, and strongly behind him steaming. White 4 saw the pilot jumped out. I claim victory of the Fw 190."
Yet he was and this kill recognized just as likely. The most successful day as a pilot, he was given 27. July 1943, when he shot down one Bf 109 and another damaged.

The end of the summer is again translated and as třicetitříletý veteran promoted to Squadron Leader, i.e. the commander of the 132. squadron "City of Bombay" based on 125. airport in Detlingu, which shares with 184. squadrons and "Clostermannovou" 602. squadrons Pierre Clostermann mentions in a post from 28. September 1943. Like the 602. form and 132. squadron interesting of the "international" composition and they have in common and task - obligate accompaniments bombers. In its ranks achieves two more successes in similarly, one probable destroyed and one damaged enemy fighter jets, when he 14. January 1944, the happiness leaves. The most likely course of his last fight, operating from british and German sources, was this: When escorting bombers on his [url=https://www.valka.cz/topic/view/15651/]Spitfire Mk. IX (MH978) over the Doullens in France attacked the German ace, major Walter Matoni. Colloredo-Mansfeld is hit, but escapes and turns the damaged machine the shortest way to England and trying to cross the Channel. At Berck-sur-Mer is but again hit the spot, and his burning machine turns out to the beach. The Pilot in the wreckage of an aeroplane dying. 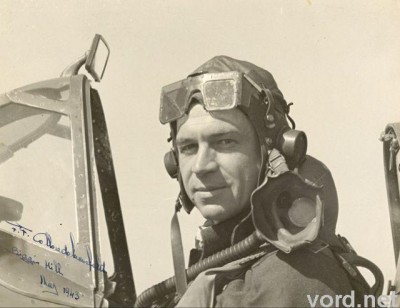 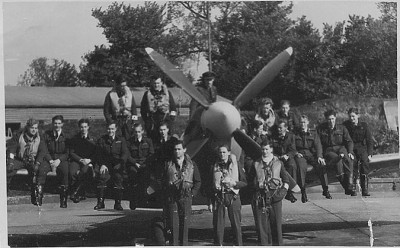 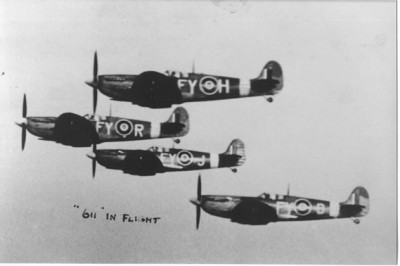 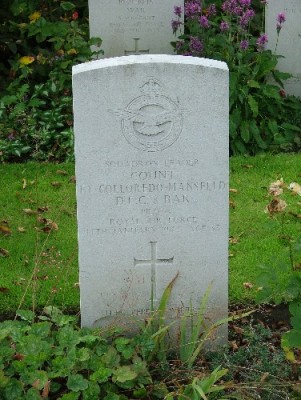 
Sources:
Shores C., Williams C .: Aces High, Grub Street, London 1994
Shores C .: Aces High, volume 2, Grub Street, London 1999
URL CZ: https://www.valka.cz/Colloredo-Mansfeld-Franz-Ferdinand-t68902#338924Verze : 0
URL EN: https://www.armedconflicts.com/Colloredo-Mansfeld-Franz-Ferdinand-t68902#338924Version : 0
Michal Rak MOD 11 years ago
Spitfire Mk.IX MH978 (FF-M) was one of the machines, which the RAF won thanks to a collection organised by the Bombay War Gifts Committee. This organization has collected a total of 246 035 pounds, for which she took a total of 30 spitfires, which have gone primarily to the two Bombay Squadronám (122 and 132). For this reason, carried under the cab, the gift inscription of the CITY OF BOMBAY. A brand new aircraft that has just left the production line of the factory in Castle Bromwich took over the 3.9. 1943 service unit Well. 33, where about ten days later, the machine took over the No. 405 and 22.9. it břebrala Well. 132 sqn. Colloredo-Mansfeld it was used as a personal machine at least since October, r. 1943. The machine was shot down by 14.1. 1944.

Source:
Jiří Rajlich: Colloredo-Mansfeldové in the second world war, History, and military 2008 no 1. 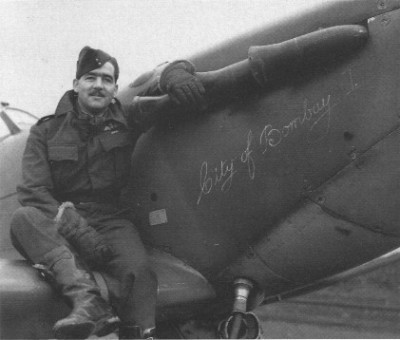 Flt Lt HJL Hallowes at Turnhouse with “City of Bombay” another Indian gift Spitfire given to No. 122 Squadron, RAF. The aircraft is BM 252, MT-E.
www.bharat-rakshak.com

URL CZ: https://www.valka.cz/Colloredo-Mansfeld-Franz-Ferdinand-t68902#339150Verze : 0
URL EN: https://www.armedconflicts.com/Colloredo-Mansfeld-Franz-Ferdinand-t68902#339150Version : 0
MACH TOM 11 years ago
Diskuse
Myself, I'm interested in on this particular pilot. However, I have a problem. I can't seem to identify his plane in No. 72 squdron, where he flew in r. 1942. At that time the Spitfire Mk.Vb and before leaving the Mediterranean válčiště was přezbrojena on the Mk.Vc. No. 611 is although he is credited with the Spitfire Mk.IX (FY-B EN133), but he was already 14. march 1943 shot down with J.H. Slater, (as commander of the swarm).The aircraft was flying and our pilot Jiří Maňák Until his retirement from the 611 so had to fly completely on another machine or to a new allocated unit. No. 132 arguably, he flew the Mk.IX (FF-M MH978). Unfortunately, I have this Spitfire found only with invading stripes. Though given that this was the aircraft shot down already 14. January so this is strange. I found also the labelling of the last unit of the OU-OF No.485 RNZAF. I also found a side view of the same aircraft but without the serial number, so it is possible that it is only the wrong identification of a spitfire with ivazními prihy is completely different. The newly ranked to No. 132
More information is in the journal of Military science and the history of the number 1. 2008, but still to me it failed to get a hold of.
I will be grateful for the help and the answer.
https://www.markstyling.com/americaneagles3.htm
https://www.luchtoorlog.be/spit_vf3.htm
www.arcforums.com
https://www.raf.mod.uk/dday/rafu.html
www.museum-explorer.org.uk
francecrashes39-45.net. 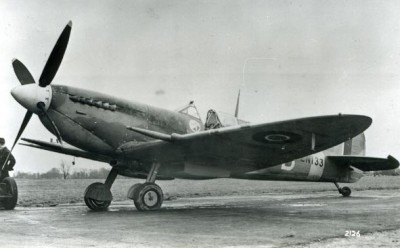 URL CZ: https://www.valka.cz/Colloredo-Mansfeld-Franz-Ferdinand-t68902#338755Verze : 0
URL EN: https://www.armedconflicts.com/Colloredo-Mansfeld-Franz-Ferdinand-t68902#338755Version : 0
MACH TOM 11 years ago
Well with a personal aircraft in the RAF it's hard. Used to have it assigned to commanders of squadrons and above, but that doesn't mean that other pilots nepreferovali a certain aircraft. Most of it shared with other members of the unit. And even with the leadership flew other pilots.

As is evident from the report of his victory, also the Colloredo-Mansfeld at 611. squadron use many planes.