Universal excavator-loader JCB 4CX is designed to perform basic earthworks in the performance of the tasks of the corps of engineers security, in particular in the extraction of soil, excavating trenches, when you modify terrain, building explosion-proof, anti-tank blocks, road constructions, okopů and covers for technical equipment, lifting loads, handling pallets, the removal of cave-ins, snow and other obstacles in the maintenance of the roads, in the liquidation of consequences of natural disasters, industrial accidents and the implementation of the demolition work ženijními units of the CZECH armed forces on the territory of the Czech republic and in foreign missions.

The vehicle in the embodiment JCB 4CXSM APC TL PS was in the arsenal of the Army of the Czech republic, introduced in 2006. The contract for their delivery in the price of the 17 930 920 Czk was signed by the 10. August 2006. Their main user became the departments 15. engineer rescue brigade. Since December 2013, most of them operated by 15. engineer regiment formed 151. and 153. ženijním banner. Day 2. October 2015 the contract was concluded for the supply of the other 5 machines in the version of the JCB 4CX 14HFWA for the amount of 16 002 250 Czk intended for armed services 15. engineer regiment. The machines were delivered by the end of the same year.

The vehicle was regularly deployed in the aftermath of devastating floods. After the floods at the turn of may and June 2013 JCB 4CX, along with machine UDS-214 and CN-251 used in removing silt from roads and land or to help with shoveling dead animals.

.
URL : https://www.valka.cz/GBR-JCB-4CX-rypadlo-nakladac-t185290#540808Version : 0
Martin Smíšek MOD 6 years ago
Dimensional diagram of the JCB 4CX, the importance of the individual dimensions listed in the table above.. 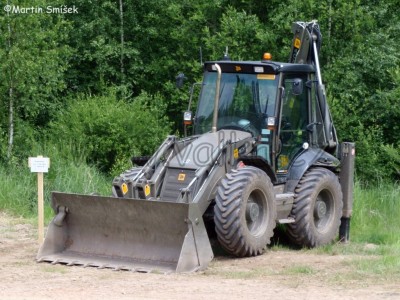 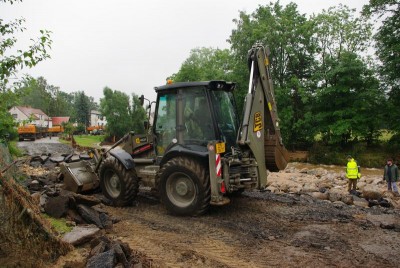 URL : https://www.valka.cz/GBR-JCB-4CX-rypadlo-nakladac-t185290#540916Version : 0
Martin Smíšek MOD 6 years ago
JCB 4CX, Company logisitky, 151. sapper battalion; the visit of the observers according to the Víděňského protocol, Bechyně, October 2014. In the framework of a several-day visit to the CZECH republic visited the observers from twenty-six member countries of the Organization for security and cooperation in Europe and the republic of Korea on Tuesday, 14. October to 15. ženijnímu regiment by Bechyně. Similar inspections in the member states of the OSCE held every five years and always include a visit to the military installations and air bases. The commander of the land forces major-general J.ed Gurník and the commander of the regiment colonel Robert Bielený met forty-eight inspectors with the activities of the engineer regiment and its tasks in the framework of the Ground forces of the ACR. During the all-day program visited some of the facilities and training areas units of the regiment and got acquainted with the progress of the department. Interested in is not only a common activity for the soldiers, or to ensure the security of objects, but also the cooperation with the civilian sector in the event of deployment in the liquidations of natural disasters.. 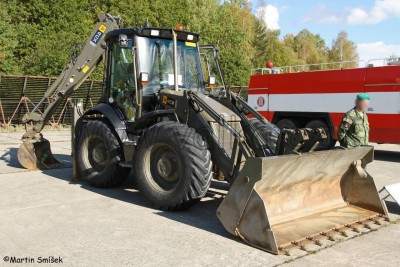 URL : https://www.valka.cz/GBR-JCB-4CX-rypadlo-nakladac-t185290#540811Version : 0
Martin Smíšek MOD 6 years ago
JCB 4CX (OEM 225 38-77) captured in vagonování at the train station in Olomouc, departure to exercise Balaton 2015, 14. October 2015. In the framework of the exercise Balaton 2015 has been a posting of the Czech engineer detachment to Hungary to help strengthen the protection of the schengen external borders during the refugee crisis. The offer of help came from the Ministry of defence of the CZECH republic and has been pre-consulted with the Hungarian partners, who accepted it and appreciated. The unit consisted of 21 members of the Army of the Czech republic. Most of the people came from 153. engineer battalion of Olomouc, supplemented by the was soldiers 151. engineer battalion of Bechyně and two members Agency logistics. It was the driver and the operator of this technique:
5x valníkový automobile T-815 HV 8x8
1x natural machine JCB 4CX with the set of natural drill and a jackhammer
1x mobile workshop ASkD-Ž
10 field kitchen PK-60, each for 60 people (without operator)
1x transporter of containers T-815 Multilift MK.IV

Czech soldiers helped their Hungarian counterparts two months of their deployment from the base in the Kaposváru started 15. October. In the case of JCB 4CX and ASkD-Ž it was their first deployment abroad. Exercise Balaton 2015 was terminated on Thursday, 17. December 2015. 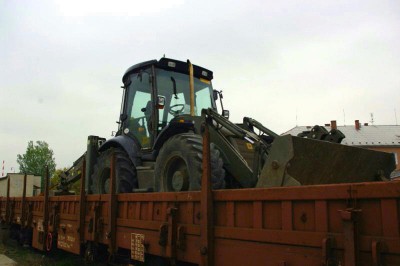