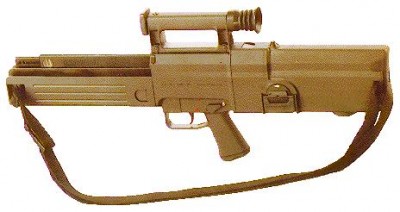 Gun G11 appears at first glance like a futuristic study built the company from HK Oberndorf /Neckar for the revival of the exposure on the veletrním stand, but the opposite is true. The designation of G11 represents a gigantic piece of innovative work done in the field of caseless ammunition, which was brought to a successful end by passing the military tests and the approval of the series production for the Bundeswehr in the number of 220 thousand units. Unfortunately, this has only happened a couple of weeks before the fall of the berlinské the wall, which meant the cancellation of orders and change the priorities.

In the course of 21 years (1968 - 1989) was a company Heckler Koch of Oberndorf /Neckar built 15 prototypes of weapons (some up in dozens of pieces) which have been tried and tested and proměřeny dozens of structural and technological variants of the conclusion. From the first prototype with a classic making a conclusion until after the rotating cylindrical conclusion of a complex feeding mechanism resembling more of a sewing machine than a gun. Long before Abakanem was implemented the principle of tříranové benefits at the speed of 2000 r/min, during which the mechanism zakluzuje into the space in the hollow barrel and the shooter is perceived as a single shot. While shooting in long bursts rate of fire achieves the optimal 460 r / minute, at which it is possible to get to the target the entire contents of the tray. On nadpažbí weapons can be placed three trays after 45 wounds, the middle one is inserted into the feeder závěrového mechanism.

Even more brilliant is the arrangement of little-known light machine gun derived from the G11, which uses a supply of ammunition from the feathery clipboard to 300 shots ! located in the hollow butt of the gun. His conclusion is different and does not have the ability to use tříranových benefits with a high cadence.

A greater number of structural variants tested also the company Hensold from Wetzlar, which was entrusted with the development of optical sights, required for the desired increase in the probability of intervention at a distance of up to 300 m At the commanded parameters is not surprising that after the experiments with the miniature collimators in the end I chose a solution strikingly similar to something that for decades used the German "jagermeistři" under the designation naháńkový telescope. This designation should taxpayers probably nerozdýchali, therefore, the army uses the designation of a tactical scope. To achieve high resilience against vibration and humidity used the company solutions from the beginnings of optics, when in a simple hermetic tubular tube of relatively small diameter is stored an optical system with a fixed deliberate plate. Rectification when sighting is performed filming the entire tube stored in the plastic carrier handle using the screws in the front. The requirement for accurate shooting up to 300 m with no manipulation of miřidly was solved slyly. When the muzzle velocity of bullets around 930 m/s for distances up to 200 m is heading the center of the deliberate marks in the shape of a ring, at 300 m of the lower edge of the ring. This solution is currently used in a wide range of sights of different manufacturers, and execution. 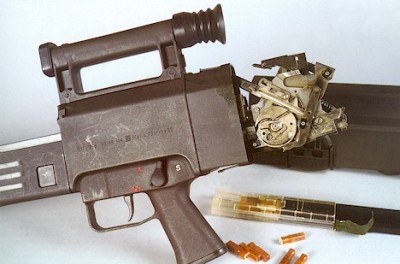 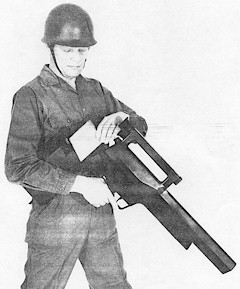 The key was the role of the Dynamit Nobel AG in Stadelnu, which carried out the development of ammunition and continuously according to the results of the tests regulate the shape of the projectiles and, in particular, mechanical and vnitrobalistiské characteristics of the used "dust" - propelantu.Were tested sequentially caliber of 4.3, 4.9 and 4.7 mm with a muzzle velocity of Vo in the range of 800 -1480 m/s and different configurations of dispersal missiles and propelantu. The original design of the hub was based on the previous work of French researchers. Logical and straightforward solution in the form of a flattened cylinder of nitrocellulose from which emerges the shot, zasouvaná into the bore failed. Problems in the removal of failed or otherwise impaired charges, which showed up at the first tests in the real terrain and in the hands of true soldiers has not removed the use of the new propelantu HITP produced by further chemical processing hexogenu. The result of a twenty-year effort is totally illogical and nepopochopitelné, but perfectly functional solution. The bullet is inside the propelantu and not when initializing in contact with the main match is spalitelná, but before it is amplified put in a metal cup and other design and technological tricks, over which the layman is amazed and the expert wonders.

Although the weapon system G11 forthcoming introduction to the equipment, innovative use of plastics has influenced the design engineers working on new projects ( StG 77, FAMAS, G36 and others ), collimators and telescopes have become an integral part of assault rifles.
Patented propelant HITP with high heat resistance has found application in air kanonech and complete license to bullets purchased in 2004, the american company AAI, which in 2010 has demonstrated mastery of all the necessary technological procedures. It is likely that only in american research centers will end the senseless search for the holy grail in the form of universal ammo for an assault rifle and a machine gun ( currently 6,8x43 ), comes an american general on the "new" idea beznábojnicového ammunition and after 30 years to some american company to offer its "advanced" and "all american" gun. 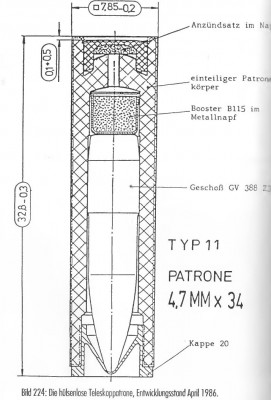 URL : https://www.valka.cz/Heckler-Koch-G11-t2734#411621Version : 0
velvet 10 years ago
Gun G11 with beznábojnicovou ammunition had the chance to become a milestone in the development of weapons like the gun Stgw 44 with the reduced ammo the 7,92x33. Not technical, but political and economic reasons caused the establishment of this milestone shifted by at least 30 years old and a united Germany took over 20 years old and already at that time, an unsatisfactory standard of NATO in the form of ammunition 5,56x45. Itself the company of HK got the contract for the assault rifle G36 which was at least a weak financial band-aid on the huge development costs embedded in the project G11.

The use of plastic parts has inspired a variety of projects of weapons, not many but without metal braces and bolted joints. According to the careful sealing of the cavity of the gun and the pressure relief valve appears to be information about the ability of the swimming guns as real.

URL : https://www.valka.cz/Heckler-Koch-G11-t2734#484217Version : 0
velvet 8 years ago
The bullets are shipped after the 15 pieces in the foil-sealed transparent boxes serving simultaneously as a filling machine. The auxiliary mechanism in the mailbox, in cooperation with the bar in the tray when you recharge partially vystříleného stack even without counting ensures that the tray will be retracted more than 45 rounds of ammunition.

URL : https://www.valka.cz/Heckler-Koch-G11-t2734#484322Version : 0
velvet 8 years ago
Závěrový mechanism is powered by the energy of powder gases through the piston in the right lower tube, which via a lever (connecting rod) and the gears rotates the cylinder in conclusion. Charging cartridges into the breech is performed by manually turning the loading wheel by rotating in the opposite direction occurs through nevystřeleného bullets finally down under the gun. Even the firing pin is not conventional, to the launch of the hub occurs by turning the eccentric tip around the longitudinal axis. The entire mechanism, including a barrel and a tray zakluzuje when fired backwards against the resistance of the brzdovratného mechanism saved in the bottom left of the tube. A large part of the parts is made by cutting from metal sheets.
As the pictures show the dismantling of the conclusion to see, reminiscent of the mechanism of the G11 successful hybrid two-stroke internal combustion engine and a sewing machine. Disassembly of this magnitude done, of course, only an armourer in the workshop vojskového body and only for the purpose of exchanging worn-out parts.

Maybe it's good, but it looks like from the perspective of dizainu completely awful.

If someone is fussy design submachine gun Sten Gun, the plastic parts don't appreciate, as well as fighter who before going on a bb mission at home in front of the mirror checking how he "suits" the new backpack. I recommend to buy Beretu ARX 160, where inside there is nothing interesting, but from the outside, is "seriously cool" and "trendy".

The designers of the HK correctly understand that this project is in the very long haul. When the soldiers will understand the benefits of beznábojnicová ammo, just odkonzervovat piece from the museum, to screw on it 4 pieces of moldings, hang the newest model of a flashlight, feed, sights, and tactical handle, or even iPhone in the tactical poudzru and all přestříknou a nice digital camouflage. At the trade fair IWA 2028 (my guess) it may be a design "awesome"..
URL : https://www.valka.cz/Heckler-Koch-G11-t2734#484498Version : 0
velvet 8 years ago