Frank Linke-Crawford was born on August 18, 1893 in Krakow. His father Adalbert Linke was a major, his mother was of English descent (Lucy Crawford). In 1910, young Frank joined the Military Academy in Wiener-Neustadt. He graduated in 1913 with the rank of lieutenant and was assigned to Dragoner-Regiment Nr. 6. At the beginning of the war, he was deployed with this unit on the Eastern Front. Until October 1915 he was awarded several times, but he was also hospitalized several times with dysentery and malaria.


He applied for transfer to the Air Force and in December 1915 was sent to a school for air observers in Wiener-Neustadt. After completing his training, he was transferred to the Flik 22 unit in March 1916, commanded by Hauptman Loconcsy. In September 1916 he entered the school again, this time for pilot training. After graduating in January 1917 he was transferred to the unit Flik 12, stationed in northeastern Italy. Initially, he flew in two-seater reconnaissance and bombing missions, later he flew as a fighter escort on single-seater aircraft. During one of the long-range reconnaissance flights, he was attacked by an Italian SPAD fighter, after landing they counted in Linke-Crawford's plane Hansa-Brandenburg CI 68 shots. During the accompanying mission on August 2, he was shot down with his plane Aviatik CI, but he himself remained uninjured.


Two days later - August 4 - he was transferred to the fighter unit Flik 41J, commanded by the hauptman Godwin Brumowski. The unit flew on machines Hansa-Brandenburg DI and Albatros D.III and had a base east of Trieste. He scored his first air victory on August 21, 1917, when in his plane Hansa-Brandenburg DI number 28.40 shot down near Monte Santo Italian aircraft Nieuport. The very next day, on August 22, he shot down an Italian Savoia Pomilio near Gorzia. This was followed by a victory again over the Italian Savoia Pomilio aircraft at Bate on August 23. He won his fourth victory on August 26 in a duel with a SPAD aircraft near Monte San Gabriele. He joined the fighter aces on September 23 in the afternoon, after the victory over the Italian seaplane in the bay of Trieste. At this time, Linke-Crawford was flying the Albatros D.III. He shot down his first balloon on October 9 at the Shobba Estuary. Another Italian Savoia Pomilio shot down on October 23 near Hermado. The first "double" was won on November 5 by shooting down a Macchi L3 aircraft belonging to the Italian 292a Squadriglia, which crashed on the mainland and then shot down the same type of aircraft, which crashed into the sea near the coast west of Latisana. He scored another "double" on November 23, when he shot down two single-seater Nieuport aircraft near Cortellazza and Casca di Fananza with his Albatros D.III number 153.11. Frank Linke-Crawford closed the first dozen victories on December 10, 1917, near the Monastier di Treviso by shooting down a Sopwith aircraft. He ended 1917 with his thirteenth victory, symbolically on December 13, when he shot down a balloon near Meolo. During this period, he liked to fly in a red air hood and therefore had the nickname "red head" among his friends.


At the end of the year he was transferred to a new unit Flik 60J as its commander. The unit had its base near Grigno in a swampy basin surrounded by mountains about 100 km north of Venice and was armed with aircraft Phönix DI. He began his performance in this unit with his third double victory 10. January 1918, when in his machine Phönix DI number 228.16 shot down Nieuport aircraft and [url = http : //www.valka.cz/topic/view/63058/SAMLS-2] SAML 2[/url] [1] (Sopwith [2]) near Valstagna. He scored his sixteenth victory on January 29 over the aircraft SIA 7b near Monte Lambara. An unidentified two-seater aircraft shot down on February 2 at Campolongo. The next day, he won his eighteenth victory by destroying the Nieuport aircraft south of Monte Pertica. This was followed by a victorious duel with the Italian Savoia Pomilio on February 24 east of Cismon, and Linke-Crowford achieved its twentieth victory over the Sopwith on March 11 south of Monte di Val Bella. It was his last victory, piloting the Albatros D.III. In March 1918, the unit Flik 60J was transferred to a higher quality airport in Feltre about 25 km east of Grigno . At the end of March, the unit received Flik 60J new aircraft Aviatik DI série 115 a later ještě letouny Phönix D.II and Phönix D.IIa series 122 and 422. He won his next double victory on May 10 with a new machine Aviatik DI number 115.32, when he managed to send an airplane to the ground in flames in the morning [ url=/viewtopic.php/t/12240/title/Bristol-F-2B-Fighter] Bristol F.2b[/url] near Levico and later in the day add a victory over another aircraft near Barcarola. In the morning of May 11 he shot down Sopwith Camel near Feltre and on June 1 another Sopwith Camel in Visone. He won his twenty-fifth victory on June 15 in a duel with a Sopwith aircraft near Rocca. In the morning of June 21, he shot down a Sopwith Camel at Val Stizzone. He scored his last victory on July 29, 1918, when he shot down a British aircraft near Valstagn Bristol F. 2b. Frank Linke-Crawford took off for his last flight on the morning of July 31, 1918, along with his three other colleagues. In a duel with three Sopwith Camel aircraft 45. Squadrons The RAF separated from the others and with a damaged aircraft tried to reach its own lines. Then he was attacked again by two Italian aircraft Hanriot HD.1 belonging to the 81a Squadriglia, after with a few hits, his Aviatik crumbled to pieces in the air and landed near Guio. The victory was attributed to Aldo Astolfi and it was his only aerial victory. Linke-Crawford was buried in Porbersch (Marburg), but when this was annexed to Yugoslavia in 1919, his body was relocated and reburied in Salzburg.


With his 27 confirmed victories, Frank Linke-Crawford became the fourth most successful Austro-Hungarian fighter pilot. In the eyes of his comrades-in-arms, he was a good aviator and a good man, a very intelligent man with a brave heart and an iron will. 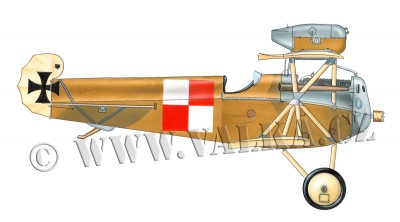 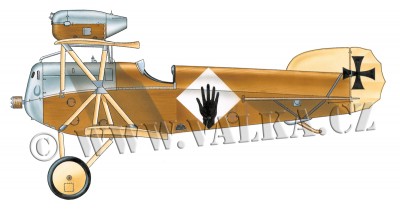 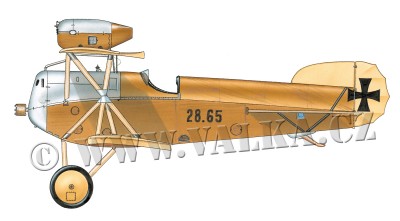 "Linke was both a great pilot, such a great person. Fully supported their men and generally ignored the rules regarding insubordination towards them. Often gave their victory to the other, less experienced pilots. Can you imagine what it's had a tremendous effect."