The imperial Japan from the first half of the thirties sought to become a major power with modern-armed army, an integral and important part of this army was the air force. In the framework of the modernization of the air force, therefore, it was necessary to replace the aging light bombers Micubiši Ki-2 and Kawasaki Ki-3.

In may of 1936 compiled by the Rikugun Koku Hombu (command of the japanese imperial army air force) specifications, in which were detailed the technical requirements for a light bomber. This type of bomber was at that time in great popularity in almost all armies of the world.

Rikugun Koku Hombu then nevypsalo a classic contest, but called directly by its three major suppliers of aviation equipment, to submit their projects. One of the invited companies was 川崎航空工機業株式会社 - Kawasaki Kōkūki Kōgyō Kabushiki Kaisha (hereinafter called Kawasaki), which provided the project Kawasaki Ki-32, the second oslovenou companies have been 三菱重工業株式会社 - Mitsubishi Jūkōgyō Kabushiki Kaisha (hereinafter referred to as Mitsubishi), her project and then the prototype got assigned the designation Ki-30. The last of the těchhto companies have been 中島飛行機株式会社 - Nakajima Hikōki Kabushiki Kaisha (hereinafter referred to as Nakajima), which for this project was given the designation of Ki-31. The board of directors of the company Nakajima, however, has decided that it will not participate and so were not even started design work.

The projects of the two former appointed by the company based on the technical requirements zformulovaných in the specifications. Required was a two-digit transposition of the aircraft, the maximum speed should be at least at the level of 400 km/h, pumovou the burden of the weight of 400 kg, the aircraft reached a speed of 300 km/h at a distance of 750 km. Throw bombs had to be possible under an angle up to 60° from the operating height of 2 - 4 000 m. Specified were of the power unit: 1) liquid chilled fork dvanáctiválece Kawasaki Ha-9-IIb (he used the Kawasaki, which is in-line engines in a highly publicized), or dvouhvězdicové air cooled čtrnáctiválce Nakajima Ha-5 KAI Mitsubishi Ha-6. The last one of these engines has chosen for his design of the Mitsubishi.

The first prototype of the Mitsubishi Ki-30 flew 28. February 1937. It was a mid with the metallic structures of the wings, the wing spar was continuous. The chassis was solid, with aerodynamic wheel covers, a it is interesting that the first proposals consider the use of zatahovacího the chassis, but the army corps of consultants it rejected. The fixed armament consisted of one machine gun Type 89 model 2 7,7 mm stored in left wing and for that weapon has been carried by almost symbolic stock of 200 ammo, the second crew member handled a moveable machine gun Type 89 model 1 the caliber of 7.7 mm and a store of ammunition in the drum, the bunker oil was 576 rounds of ammunition.

When comparative tests have been consistently matched against the prototypes of the two companies, both were found to be similar in flight characteristics. Preference was eventually the prototype of the Mitsubishi Ki-30. For its main advantage was considered to be air-cooled. In the opinion of the command of the air force to better suit the traffic conditions on the field at the airports. Engine Mitsubishi Ha-6 was, however, a lack of and so in addition to the first prototype, were all the other powered by engines Nakajima Ha-5KAI on the performance of the 960 horsepower. Installation of another type of engine was a total no hassle, japanese engineers were on the air cooled engines used to and everything is so fast here. Problems with cooling, however, spared the competitive prototype of the Kawasaki Ki-32.

Use:
Mitsubishi Ki-30 was in the arms of the adopted in 1937 as a "light army bomber, type 97" in the serial production came in march 1938, it continued until the end of the year 1940, when it was terminated after manufacturing 706 aircraft (some sources state 704). A light bomber for the first time intervened in the fighting in October 1938 in the chinese battlefield and also celebrated its largest successes. The fight here takes place on the permanent superiority of the japanese air force - chinese air force was weak. The loss of these tactical tactical fighters so caused mainly by firing from the ground. These losses eventually led to to the adoption of competitive Kawasaki Ki-32 to the arms and so eventually the two rivals meet in the chinese heaven. It is a great happiness for the japanese pilots of these machines, that in early 1942 both types were already withdrawn from first line service (mostly to training units) and so were prevented from their losses. Ann, that was the allied code name the Mitsubishi Ki-30, the fighting has intervened only briefly in the French Indochina and the Philippines. At that time was the superiority of the Japanese on these battlefields large, but even so, it is here the fullest to demonstrate the weaknesses of this structure - the lightness of construction, the lack of defense and protection and weak performances. Finally, the fighting in the Pacific and in China there were several aircraft used for suicide raids, but it was the sad fate of most of the japanese aircraft. I have to mention a few bombers that fought against the French in Thai air force. Thailand then kolaborovalo with Japan.

Was produced primarily by the parent factory of Mitsubishi in Nagoya, and about 68 aircraft, he added, the army air arsenal at Tachikawa.
A certain paradox is that the competitive Ki-32 was finally made almost one hundred and fifty pieces more..
URL : https://www.valka.cz/Micubisi-Ki-30-Ann-t1289#135708Version : 0
Vláďa MOD 18 years ago
photos of Ann. 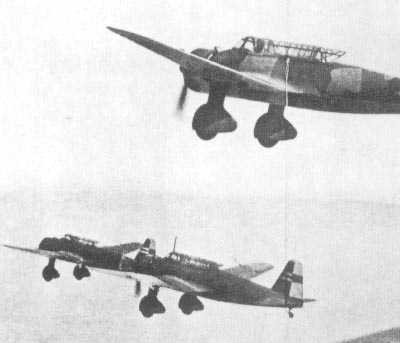