Nakajima B6N2 12
made 1 133 aircraft of this version from June 1943 to August 1945, the engine of the Mitsubishi MK4T Kasei 25, výstřelný channel for shooting under the fuselage

Nakajima B6N2a 12a
production is included in the previous version, a machine gun-type 92 was replaced by the more powerful weapons of type 2 caliber 13,0 mm.

Nakajima B6N3 13
made two planes, (in the factory converted B6N2c), this version has been designed to operate on land bases, dismantled by the device for on-board operation save weight and it helped slightly increase performance

The successor of the on-board bomberNakajima B5N2 was designed according to the specifications of the 14-Shi (14. year of the reign of the emperor Hirohita) issued in 1939. Using these specifications 大日本帝國海軍航空隊 Dai-Nippon Teikoku Kaigun Kōkū-tai (naval air force) has announced the technical requirements for the new bomber. According to these requirements had a new aircraft to achieve a maximum speed of 465 km/h and a cruising speed of be moving around 370 km/h, the desired range of 1-850 km with pumovým the load of a weight of 800 kg. Without the bombs had bomber reach a distance of 3, 335 km. Completely underestimated was the armament, as the navy was required in only one machine gun in the rear part of the cabin. The sailors hoped that the new aircraft will be able to include in my arms within two years, we will see that it was a very optimistic assumption.

The company 中島飛行機株式会社 - Nakajima Hikōki Kabushiki Kaisha (hereinafter referred to as Nakajima) has mandated the leadership of the work on the project engineer Kenichi Macumuru that when designing a new bomber holding the proven design of the previous type B5N. The first prototype was ready for testing in march 1941. The appearance is slightly similar to its predecessor, the required higher performance meet mainly due to about 80% of the higher performance of the engineNakajima NK7A Mamori 11, who had a power of 1 850 horsepower. Kaigun Koku Hombu, although required to use the engineMitsubishi MK4T Kasei, but in the end, this requirement is abandoned, because the engine Mamori had a lower specific fuel consumption and according to the manufacturer here was even higher performance potential. Bearing surface of the wings is approximately coincide with the surface of the wings of the older NakajimyB5N2 Kate. The wing could be folded along the fuselage to the hangar to occupy as little space.

The first flight was carried out 14. march 1941, flight test, immediately after the launch, however, have revealed a number of shortcomings, a large tilting moment quadrifolia propeller caused considerable instability, which is the on-board torpédového bomber quite a substantial defect. Help should enlarge the SOP and its slight offset. With the angle of offset is the vertical tail surfaces are a bit laborovalo, up from thirty-produced aircraft began to use the offset of 2°10 to the left. Another, equally serious problem has been the strong vibration of the engine and its prone to overheating and to make matters worse, the gear had a tendency to zkolabování, because he did not have sufficient strength. The gradual elimination of these defects has been challenging and lengthy exams are held back and thus oddalovalo and the launch of a new on-board the bomber into the arms of the. Board tests are carried out on aircraft carriersRyúhó andZuikakuhere have shown to other problems with the strength of the chassis and fitting of the retaining hook.

The beginning of the year 1943 is finallyNakajima B6N1 found to be eligible for inclusion into the arms, In the japanese naval air force was known to be under martial on behalf of the Tenzan (the Divine mountain). The fight is getting a new bomber for the first time, getting in the battle for the Philippines, here he allied intelligence service has assignedcode name Jill. Unfortunately for Jill, the Americans at that time had already obtained the supremacy in the air andHellcaty the u.s. naval air force japanese torpedo bomber very hard decimated.

The japanese have about enhancements and so the engine was equipped with a single exhaust pipe, this adjustment did not produce the expected result and has been since it dropped. The performance of the engine Mamori was not to start a fully podvěšeného of the aeroplane from the deck of a small aircraft carriers sufficient and so has to adjust, which allowed to hang below the hull of the auxiliary starting rocket engines solid fuel, these engines facilitate such a take-off. The total was made 133 aircraft type B6N1 model 11. The main reason for the termination of their production was the lack of engines Mamori 11, these engines have ceased to produce, and the designers had in 1944 to Tenzanu install the engine, which was the navy originally sought - aMitsubishi MK4T Kasei 25, this created a type ofB6N2 model 12. Engine Kasei was disproportionately more reliable and less failure, as it has gone through a longer development. Because this type of engine had less than 150 kg less weight than what the engine Mamori, she had to be, for the conservation of the center of gravity of the aircraft, extended by 500 mm to the bow of the aircraft. The shifting of the fire of the bulkhead, it was possible to slightly (about 10 litres) to increase the volume of the fuselage fuel tanks.
The new version of the aircraft have been put in place yet another news - výstřelný channel for the machine gunType 92, this machine gun has been possible to a limited extent, obstruct the space under the belly bomber. The first 70 produced Tenzanů was in the left wing of the fixed machine guntype 97 with a supply of 400 rounds of ammunition, the combat value of this weapon, however, was small and was often on the units removed. The tail wheel is no longer in this version of zatažitelné. The designers have tried to increase the passive safety, and so on at least one of the aircraft were tested self-locking packaging, the fuel tanks, were finally condemned (it was in the year 1944!), because these tanks should be about 30% smaller in volume.

The japanese navy failed to already replace the loss of their aircraft carriers and so it happened that many of the 1 133 produced B6N2 operated from land bases, approximately one-third of the bombers was used to patrol protiponorkovému and was equipped with a simple radar H-6. The presence of this radar on board Tenzanu reveal a big antenna on the leading edge of the wing and on both sides of the fuselage. Many Tenzanů ended very sadly – has taken off to a suicidal raid. 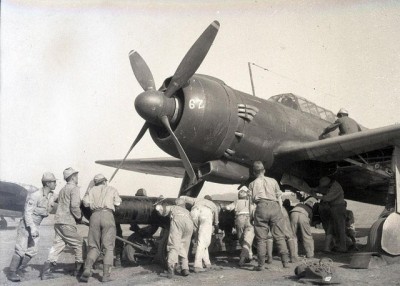