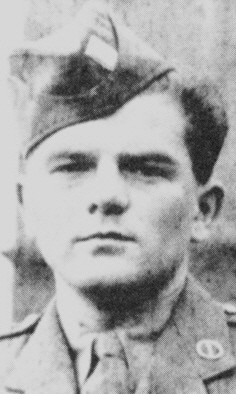 
Zdroj: Miroslav Brož - HRDINOVÉ OD SOKOLOVA, Avis 2005
URL : https://www.armedconflicts.com/Petras-Sergej-Vladislav-t33219#148148Version : 0
Dav 14 years ago
Sergei Petras was born 08.11.1921 in the Moravská Ostrava. His father, Vladislav Petras, he was officially an officer in the cooperative organization, in fact, sent by an agent of the Comintern with the aim of organization of the communist party in Czechoslovakia. His mom, Maria Isakijevna, née Kuznetsova came from Riga. With Vladislav Petrasem met at a party meeting in the Soviet union.

Vladislav Petras, born five days before the end of the year 1892, he was drafted into the austro-Hungarian army in the autumn of 1914 to the jihlavskému Infantry regiment no. 81. In march 1915, he was deployed on the front line in the area Tarnova. In may 1915 defected to the Russian side in the space Sieňavy. In the pow camp Darnica, Kiev he's liking the ideas of the bolshevik proletarian revolution. In the second half of the year 1917 joined the czechoslovak legions in Russia. in Berezani formed 7. czechoslovak rifle regiment. In February 1918 he entered in the Kiev section of the Red guards and became their front representative. In march 1918 he crossed over to the Red army and joined the ranks of the national section of VKS (b). At the same time becomes an agitator for interaction between the Czech military units, with the objective of mobilizing compatriots to defend the victory řijnové revolution. With Jaroslav Hašek in April 1918, he worked in the recruitment centre for formovní čs. international sections in the Samara. After fighting about the Penzu with the czechoslovak legion in may 1918 in him began gnawing doubts about the correct direction of the bolshevik revolution.

In December 1920 he secretary of the executive of the Comintern Berezin entrusted the important mission – to become a secret agent of the Comintern in Czechoslovakia under official diplomatic cover of the soviet trade mission. He was the assigned code name of the Post. His task was the organization of the Communist party of Czechoslovakia. Later it is transferred to the berlin branch of the soviet trade mission. In Berlin in September 1925, leaving Marija Isakijevna her husband and her son Sergei and left for her lover, the German internacionalistou. Therefore, Vladislav Petras filed for divorce, which was in January 1928 granted. The following year he returned to the Prague. In 1927, becomes the administrator of the soviet trade mission. Agitational activity Vladislav Petrase began to follow the police. During his assignment courier to the spa Baden-Baden is meeting his second wife - Miserably Alexandra Schneeovou, which was too divorced from the first marriage she had a son Richard. In July 1928, Vladislav Petras marry for a second time.

At the same time Vladislav Petrase began, police and counter-espionage, more to follow. In 1929 he refused to extend the passport. To was not revealed Petrasova the activities of an agent of the Comintern, he asked his supervisor about retirement Moscow. Was granted, and on 31.06.1931 departs to Moscow as kinoinstruktor in Sojuzfilmu. In 1936, it is expelled from the Communist party and later is moved to place the master in the workshop. At the time of stalin's purges is 04.03.1938 arrested by the authorities of the NKVD and imprisoned in custody. He is accused of working for the czechoslovak and German espionage.

After his father's incarceration Sergei Petrasovi and Alexander Katkovové was born the son of Vladislav. In 1940 he completed his schooling in desítiletce graduation test. Employed as a phase rozkreslovač in the moscow studios cartoon. When Germany attacked the USSR, Sergei immediately decided to voluntarily join the Red army because he wanted to gain a position, from which it would be the most efficient way he could get justice for his father. Because of the imprisonment of his father but not to the Red army adopted. They accepted him as a volunteer to the 6. fire company 1. moscow mládežníckého regiment fire protection on Manéžním square. There went through basic military training without weapons.

At the time of the first German air raid on Moscow in the night from 21. on 22.07.1941 performed a patrol at a checkpoint hlásné services. At the Belarusian station rescued from the burning house nine-year-old boy. For this act he was the commander of the regiment nominated for a medal "For courage".

The Red army was príjat up in a time of imminent danger to Moscow on 03.11.1941. He was relegated to standby regiment on the northwest outskirts of Moscow in the direction of the Gorgeous Poljanu. Due to nevyjasněnosti his citizenship and allegations the father was then transferred to the working sections, where professionals, service politically unreliable. There too lived his first fight with the enemy. When fending off an attack ran to an abandoned cannon and managed to him to destroy the tank. At the same moment the tank fired a shot toward the gun and grenade explosion Sergei from him flinging, he remained lying on the snow. His offense helped the unit to repel German attack. The injured Sergei was taken to the regimental dressing station. It was in the night attacked, well with the help of the attack managed to distract. For a fight that Sergey earned a proposal for the honors. After the publication of the call for entry for the czechoslovak troops in the USSR asked to be transferred to the czechoslovak units. His request was granted, because the commanders got rid of the problem, if Sergei can fight with weapons in their hands and whether he can grant the proposed award.

In kujbyševské úřadovni čs. the military mission is present 11.02.1942. The next day arrived in Buzuluk, where he passed the admission procedure and the date of 14.02.1942 even odvodovým management. With share number 253 was it assigned to the 1. the czechoslovak field battalion – motorcycle company, which velil Václav Kovařík. He was accepted into útvarového of the football team. Later at the battalion established platoon guides with the commander of the ppor. Antonin Crowbar. To her (Samopalná squad, according to other sources, the platoon automatčíků) was selected and Sergei. After taking the oath, 1. čsspp with him went to the front. For the fighting spirit in the defence of Sokolova was designed to vyzamenání Czechoslovak War cross 1939. Received it on 17.04.1943, together with him, also he was awarded by soviet medals "For courage" and "For defense of Moscow". After graduating from a soviet school was in the second half of 1943 appointed commander of the platoon samopalníků (Czechoslovak tank battalion) and promoted to the rank of ensign.

After fighting about the Kiev was designed together with the Richard Tesaříkem and Josef Buršíkem the Title of hero of the USSR and the medal of Gold stars and medal "For valor" (? - ed. JP). Gold star to him but it was the authorities of the NKVD refused and gave him only a order of Lenin.

Enlargement 1. the czechoslovak independent brigade 1. the czechoslovak army corps from Petrasovy platoon leader becomes a company samopalníků Motorisovaného samopalnického battalion with the commander of the Antonín Crowbar subordination 1. the czechoslovak tank regiment. In the autumn of 1944 he was promoted to the rank of lieutenant. After the injury first. Antonina Sochora in the battle for hill 534 took 14.09.1944 Sergei Petras command over Motorisovaným samopalnickým banner.
At the time of the fighting on the dimension Obšár was injured again. They took him to the dressing station to the town of Dukla. There was general Ludvík Svoboda promoted to lieutenant commander and awarded the medal of "For valor". In November 1944, received fifth Czechoslovak war cross 1939.

After healing from the injury was in Moscow for his merits in the liberation of Ukraine awarded the "the Order of Bohdan Khmelnytsky" III. st On 16.11.1944 after a long waiting spůsobeném the war he took to wife the mother of his son Vladislav - Alexander Ivanovnu Katkovovou. The unit returned at the end of November 1944.

In January 1945, in the foothill village Price finally learned the fate of his father from the general of the NKVD of Zhukov. According to him, the document had to die on the consequences of the disease 10.06.1941. From the declassified archives of the NKVD but after years learned the real date of father's death – 13.08.1938.
After taking Nikita Khrushchev on the forehead of the USSR was the father's case re-investigated and subsequently was Vladislav Petras posthumously rehabilitated.

On 16.04.1945 was in the course of the fighting about Bolatice Sergei Petras hard to hurt. In the head he was hit with shrapnel and showered him with fragments of masonry. Comrades have managed to odtransportovat to the infirmary, where the doctors were able to save. A few shrapnel but remained stuck in his head the rest of my life. Experienced severe injuries he triggered a lifetime of health problems. For heroism in battle he received the seventh Czechoslovak war cross 1939.

After discharge from the hospital in the summer of 1945 he took part as commander of the troops of the military securing the border territory of the republic. After complicated negotiations in the summer of 1946 succeeded his wife and son move into Czechoslovakia. Finally, he was as a war invalid demobilized in the rank of major in 1948. In the framework of the osídlováni border after the expulsion of the Sudeten Germans moved from Ostrava by Jablonec nad Nisou. There Sergei Petras first made the national administrator in the factory, after taken over from health reasons, the operation of a convenience store. In 1950 he became the business planning officer foreign trade company Merkuria. In 1951 he had a daughter, Nina.

In 1953, he was as a reserve officer once again called into military active service. With his family he moved to Prague. Distance learning to complement military education and graduated from the military academy. Thanks to her knowledge of languages was placed on the foreign oddélení WELL. In January 1963 he was appointed military attaché in the the Bulgarian people's republic.

After the invasion of Warsaw pact troops into Czechoslovakia was Sergei Petras normalization transferred to the Military historical institute. In 1976 he retired in the rank of colonel. Fully involved in the activities of the czechoslovak union of invalids and the Union of anti-fascist fighters.

In the nineties he was president of the Václav Havel promoted to the rank of major-general, retired.

Sergei Petras died 27.07.1997 for the treatment of residence in the marienbad at the age of 76 years, his beloved wife Alexandra in October next year.

Source:
Karl Richter: a Soldier of the first line. War drama the son of an enemy of the people.
URL : https://www.armedconflicts.com/Petras-Sergej-Vladislav-t33219#619312Version : 0
Janko PALIGA MOD a year ago
Diskuse