American fighter Bell P-39 Airacobra, with its unusual solution (engine in the center of gravity of the aircraft) inspired several designers from different countries to design a similar design. One of them was the Italian designer engineer Giovanni Casiraghi, who after his return from the United States began working at the Piaggio factory as chief designer. First, at the turn of 1938/39, he developed a project for the Piaggio P.118 aircraft, which at the end of 1939 reworked into a new P.119 project. Representatives of the Italian Air Force (Regia Aeronautica) were acquainted with this project, they found the new fighter project so interesting that an order was agreed for the construction of two prototypes (MM.496 and MM.497). From the very beginning, the MM.496 prototype was intended only for static strength tests.


The construction of prototypes began with a considerable delay until the end of 1941. The aircraft was technologically very well designed, great emphasis was placed on easy and quick access to all important parts of the aircraft (engine, weapons, etc.). The fuselage was relatively large, because the propulsion was chosen a massive two-star eight-cylinder Piaggio P.XV RC. 45 with a take-off power of 1,500 horsepower and for possible production was planned to install a more powerful version of the P.XV RC.60 (1,700 hp). The engine was stored behind the cockpit, ie in the center of gravity of the aircraft and this brought advantages - especially better maneuverability, further - the fuselage expanded gradually, which was advantageous in terms of aerodynamics. Another advantage was that it was possible to install a massive armament in the released bow, including a sufficient supply of ammunition, and finally, by moving the cabin in front of the engine, the pilot's view was greatly improved.


The prototype MM.497 was completed in November 1942 and looked quite combative, under the front of the fuselage were large air inlets, which cooled the engine, to regulate the flow of cooling air behind the engine were large control flaps. Factory tests began at Villanova d'Albenga Airport, sometime around mid-November 1942, and military tests began on December 19 of that year. The test pilots complained about insufficient engine cooling, the cooling control flaps had to be kept fully open, but this increased aerodynamic drag and worsened airflow around the tail of the aircraft and was also the cause of vibrations of the tail surfaces. The aircraft had poor take-off and landing characteristics, where it suffered from considerable instability. During the shooting tests, the pilots complained about the large vibrations that were transmitted from the weapons to the entire structure of the aircraft, and remember that only two machine guns were installed, but it was planned to use four machine guns. The lower machine guns were not installed in the prototype, but the handles were prepared for them, as well as there was room for a supply of 450 rounds for each of them.


Tests of the Piaggio P.119 aircraft began with a delay of more than six months against the "Series 5" aircraft. In addition, the new aircraft needed quite a long time to eliminate its childhood diseases, which "Series 5" aircraft almost did not have. The end of the tests was caused by an accident on August 2, 1943, when the prototype crashed during landing, the landing gear brakes failed, the wheels locked and the overturning of the aircraft damaged the propeller and one wing, the front fuselage was damaged, but it could be repaired, Until the surrender of Italy in September 1943, repairs failed to begin. After the surrender, all on P.119 were interrupted and terminated.


Note.— Due to engine cooling problems, it was not possible to perform the full tests and so the performance parameters are only calculated, for example the access was calculated at 12,400 m, but the aircraft did not exceed 9,800 m. 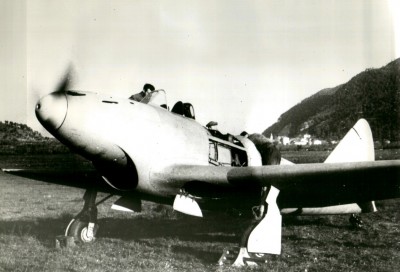 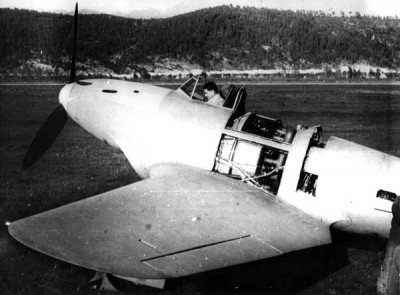