After graduating, he joined the Polish Air Force and underwent training at the flight school in Dęblin. When Poland was invaded by the Germans in September 1939, he served in the 36th Observation Squadron 3. regiment. After the defeat of his country, he fled via Romania to France, from which he got to Great Britain.


Here he underwent retraining at Hurricany and on September 4, 1940 he was sent to the airport Church Fenton k 306. squad. His unit did not become operational until November 1940 and was not enough to intervene in the Battle of Britain. However, she participated in patrol flights, both day and night. Already on November 13, the squadron scored its first victory, when the trio of its pilots probably shot down one He 111.


However, Rutkowski's career with the RAF almost ended sooner than he would have liked. On December 8, 1940, he suffered burns in the crash of his Hurricane and had to undergo prolonged convalescence. After recovery, he returned to the unit, but on May 19, 1941, he had little again.


The squadron was patrolling that day when a group Messerschmitt Bf 109 attacked them over Maidston. Before the Poles could react, the enemy was gone and three Hurricany fell to the ground. F/O J.A.Czapiewski, P/O Rutkowski and Sgt B. Kroczynski lost their lives in the wreckage of the Z2456/UZ-W aircraft, leaving their Hurricanes Z3065/UZ-B and Z2965/UZ-K with parachutes with injuries.


Their conquerors probably came from 4./JG 52, which claimed four victories north of Dover over Spitfires; two were scored by Oblt. J. Steinhoff and one Gefr. A. Glunz and Fw. Mr. Mayr.


Rutkowski broke his bad luck only on June 16, when he damaged the Bf 109 south of Boulogne. In the meantime, in April 1941, his squadron became part of 1. Polish Fighter Wing (together with 303. and 601st squadron) at the airport Northolt.


He scored his first certain victory only after rearmament of the unit to Spitfires Mk.VB . On December 18, 1941, the Three Hundred and Six participated in Operation Veracity. Heavy bombers RAF had the task of bombing the port of Brest, where ships were moored Schranhorst a Gneisenau. The British formation was attacked by German fighters, who shot down five bombers and one fighter. The Poles countered by destroying two Hundreds, one of which was credited to Rutkowski's account.


Because the German ships could not be destroyed, Operation Veracity II was launched on the penultimate day of 1941. Even during this operation, German ships escaped sinking and pilots from JG 2 deprived the RAF of another three Halifaxy and three Spitfiry.Polish squadrons of numbers 302., 306. and 317 were, however, this time as lions and although two of the three lost Spitfires were Polish, they claimed an 8-3-3 victory; Rutkowski contributed one Messerschmitt.


On March 20, 1942, Rutkowski was promoted to Flight Lieutenant and on April 7, he received Krzyż Walecznych who gets three more times during the war. At the end of April, Rutkowski leaves the 306th Squadron, but already in May he is sent as a squadron commander to the sister 317. squad. With it, he continues to intervene in air battles over Europe and claims two more victories. It happened on August 19, 1942 during the cover of the landing at Dieppe. First at 10.20 he shot down one Do 217 and at 16.20 he got one He 111. In total, the 317th Squadron scored a 7 + 1-0-1 victory and did not lose any aircraft itself.


At the end of August, Rutkowski is promoted to Squadron Leader and the 22nd returns to the 306th Squadron as its commander. It was again part of the 1st Polish Wing at the "Polish" Northolt Airport. In October 1942, the unit converted to the excellent Spitfires Mk.IX and further launched raids on occupied Europe. However, Rutkowski was successful on the new type only in the following year 1943, more precisely on January 21, when during Rodea 156 shot down one Fw 190.


In the meantime, however, he was already a proud holder of the award Virtuti Militari (5th grade) and DFC, which he received in October and December 1942, respectively.


He won his last victory at the head of the 306th Squadron on February 15, 1943. During Operation Circus 266, aimed at sea transport at Dunkirk, he shot down another Fw 190 north of Calais.


His long operational tour ended on March 13, 1943, when the squadron took command of S/Ldr. W. Karwowski.


Rutkowski then served in staff positions at Northolt Airport. At that time, several Polish fighters stayed with the 61st Squadron 56. fighter groups 8. Air Force and Rutkowski on its Thunderboltech also performed several unofficial trips over enemy territory. The Americans probably awarded him an Air Medal.


He returned to regular service on October 10, 1944, when he became commander of 133. wings, which consisted of 306., 315. a 129. Squadron, which was soon replaced by 309. squadron. The units were armed with excellent Mustangs Mk.III and undertook operations for long distances, mainly over Norway and Denmark.


He scored his first victory in the new position on October 16, when he led the squadron 316. Squadrons on Ranger in Denmark. In the vicinity of Aalborg, they encountered six Messerschmitt Bf 109s, immediately attacked and claimed all as destroyed. Rutkowski scored half a share of one victory.


In fact, the Poles encountered five hundred and ninth from the operational training JG 102 and shot down the aircraft "white 141" , who piloted Werner Haugk, former pilot Stuky a Bf 110, winner of 9 fights and bearer of the Knight's Cross, who perished. The remaining German pilots preferred to quickly put their 100s on their bellies to avoid the deadly Mustang fire!


Rutkowski scored his last victory on December 7, 1944. This time he led the Mustangs from the 315th Squadron, which provided protection to the attacking Beaufighters and Mosquito, whose goal was maritime transport off the coast of Norway. Above the coast, the RAF formation was attacked by German fighters, who claimed the destruction of 13 twin-engine and two fighters.


However, the attack wing lost only three and the 315th Squadron lost one aircraft, F/O A. Czerwinski in the ruins of his Mustang HB857/PK-C died. However, the remaining pilots claimed five shot down stodevítek and Rutkowski added a probable victory over [url = http : //www.valka.cz/topic/view/13705/Focke-Wulf-Fw-190] Fw 190[/url]. German III./JG 5 actually lost four aircraft.


After leaving the RAF, Kazimierz Rutkowski settled in Britain. 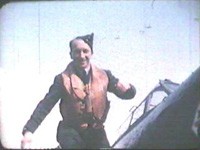 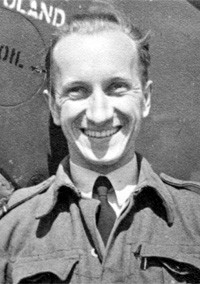