URL : https://www.valka.cz/Tankova-instrukcni-divize-1944-1945-t3827#462676Version : 0
FiBe MOD 8 years ago
Tank instruction division began to take shape in the Potsdam in November 1943 and in early 1944 they moved into the space Nancy-Verdunwhere was formally set up to 10. January 1945. The basis of a cadre division formed the members and listeners of the Schools of the tank troops of I and II. It was therefore a very experienced troops, basically the elite of German tank units. Most of them went through the fighting in the East, in Africa or Italy, where you often have earned various commendations for bravery. No wonder, then, that the division was from the outset considered an elite formation. At the beginning of the year was sent to Hungary, where it has completed training. Then she returned to France, where took over the role of the armored advance 7. army.

When there was 6. June 1944 to the Allied landing in Normandy, the division was according to the plan held in reserve. Deployed was already 8. June, but even so, the Germans lost valuable two days. Tank instruction division was stationed in the british-canadian sector of the u Caen alongside 12. panzer division SS "Hitlerjugend". The division participated, for example, to repel the operation Perch, specifically the fighting on hill 112. The allied a swipe at Villers-Bocage jeopardized the rear of the division, however, its units, together with units 2. panzer division and 101. the heavy tank section managed the british procedure to stop. The division then held a position at the Tilly-sur-Seulles. The end of the month the division recorded a loss in the amount of 3 thousand men, had lost 51 tanks and assault guns and wrote off 82 polopásů and almost three hundred other vehicles.

2. July got Tank instruction division orders to leave the area Tilly-sur-Seulles and move towards the west, where she had help with retention of american pressure in the direction of the on Saint-Lô. Division after the arrival of the hit on u.s. 83. infantry division, went on the offensive, occupied the Pont-Hebert and kept him despite several american counter-attack. Then take 11. July a sortie to the village of Le Désert, but here to hit the defense in the form of tds M10 Wolverine and tactical air force. The attack of the division brought a loss of 20 tanks and need download. During the next two weeks the division held the position against repeated american attacks. Saint-Lô fell 19. July and six days later the Americans launched the operation Cobra, which should open the way from the normandy beachhead. The beginning of the operation announced a massive carpet bombing, which took place more than 1,500 allied bombers. Tank instruction division was located directly on the wound, and suffered such heavy losses at the outset of the operation. You even deepened the strong artillery preparation, involving thousands of allied main. After the division stormed the american 1. infantry division supported by the shermans of the american 2. and 3. armored division. Division moment despite strongly reduced the combat value of offering resistance, but 5. August was the most downloaded to Alençonu. On the battlefield there are only two battle groups - Hauseho battle group and Ritgenova battle group. These two formations, which were formed by the remainder given a fighting technique, and team, were deployed alongside the marines. After the fighting was hauser's group dropped to Fontainebleau. There then followed all the rest of the division. Here then was a division, which at that moment had only twenty tanks, was withdrawn to Germany. Loss zacelovala from mid-October 1944 in the training area Sennelager u Paderborn.

Tank instruction division should be after the addition of forces part of the attack wedge in the framework of the German attack in the Ardennách. At the end of November, but the division deployed against the outcropping at Saverne, where it suffered, like other units, significant losses. It delayed the launch of its own attack, as was the need to replenish stocks. This, however, failed to fully achieve, and so it had to be a division strengthened by the secondment of two sections of tank destroyers and a brigade of assault guns. If 16. December the offensive began, was Tank instruction division in the middle of the German offensive formations. The way she had to clean the 26. division folk grenadiers, but her procedure suffers a setback, which subsequently slowed down and the tank division. Her units extra hit in Wiltzu and Hosingenu stiff resistance.

The situation has improved 18. December, when it was restored the way forward. People's grenadiers secured the bridge across the river Clerf, thus the tank opened the way to Bastogne. But those same people's grenadiers, who had equipped more horses than motor vehicles, then, paradoxically, procedure tank instruction division stalled. On the way to Bastogne yet the German tankers delayed resistance Cherry combat team of 9. armored division. The americans planted the Germans significant losses, however after time they had to retreat, thereby once again open the road to Bastogne. But most of the divisional tanks were sent north to Mageretu here to support the people's grenadier guards. The commander of the division Bayerlein it also gave him incorrect information about the approaching strong group of american tanks and infantry, to which he responded by stopping the procedure, the redeployment and the creation of a defensive position. After a time, the mistake explained, commanders once again set off to Bastogne, but it has already managed to secure the members 101. airborne division. Tank instruction division was therefore divided. Most of its tanks continued to Máse, while one battle group, which formed primarily Instruction regiment of panzer grenadiers 901, remained in Bastogne, here to help 26. division folk grenadiers to conquer this town. The group here has carried out several attacks on american paratroopers, during which it suffered heavy losses. The rest of the division has had some success, but was stopped by heavy resistance in St. Hubert and subsequently sunk into the position of fighting south of Bastogne.

21. December was tank instruction division withdrawn from Bastogne and the associated with the 2. panzer division and 116. panzer division in an assault wedge, which should break through to Dinantu and the river Máse. The division fought its way St. Hubert and went to Rochefort, where once again ran into tough resistance. The americans, although in the end after all-day fighting forced to retreat, but once again suffered significant losses. Even another procedure at Dinant was not peaceful. In Buissonville division hit on the Combat command And the u.s. 2. armored division.

After the failure of the Ardennes offensive the division was once again complemented, however, to the original condition had a far number of and the quality. The division was then deployed in the Rhine against anglo-canadian forces that were attacking in the operation Veritable. The division here has suffered a significant loss, however, had to be moved to Remagen, where the Americans seized the bridge over the Rhine and built on the right bank of the bridgehead. Tank instruction division had a bridgehead discarded. The germans, although the Americans inflicted considerable loss, but the beachhead keep. The division then led the exit of the fight and was hemmed in Rúrské pocket, where in April she crossed the Winterbergu into american captivity. 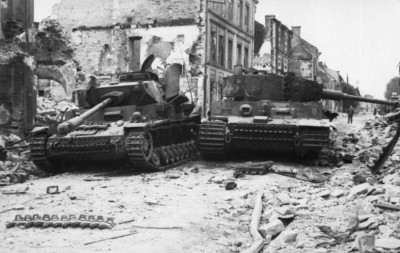