In May 1909 he graduated from the military academy and in December of the same year he was assigned to 27. infantry regiment as a lieutenant.
In November 1921 he graduated from the War College with honors. From December 1922 he was assigned to the General Staff. In March 1925 he became a major in the infantry and in August 1928 a lieutenant colonel.
In August 1929 he was assigned to the 52nd Infantry Regiment and in February 1932 to the staff of the Shanghai Expeditionary Force in Shanghai.
In December of the same year, he became a colonel and was entrusted with command 25. infantry regiment, holding this post until 1935. In March 1935, he became a military adviser to the command of the Guangdong Army in Manchuria and subsequently to the Chief of Staff of the Chinese garrison army.
In 1936 he was promoted to the rank of Major General and commanded the Fortress of Hoyo to 12.08. 1937, when he became Chief of Staff of the Western Defense Army.


After the outbreak of the Sino-Japanese War, he received 15.07. 1938 command of the Infantry Group of the 27th Division. 11.08. 1939 returns to Japan, where he becomes commander of the 11th Reserve Division and in October becomes Lieutenant General .
In August 1940, he was given command 55. division, commanding them until December of the same year.
02.12. 1940 subsequently took command of the 55th Reserve Division.
In June 1943 he was demobilized. 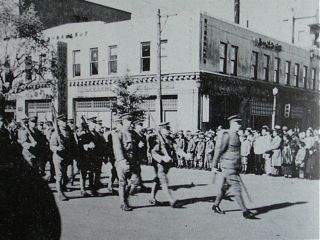