The history of this heavy four-engine bomber, the first of its kind, begins in 1925, when the first negotiations take place between Ostechbjuro and CAGI on the construction of a heavy bomber with a capacity of 2000 hp in ground and float versions. Work on the project of this aircraft begins in May/May 1926 under the leadership of A.N. Tupolev, while the design and construction was divided among the chiefs of individual CAGI groups as follows: V.M. Petljakov - wings, N.S. Nekrasov - tail section, A.I. Putilov - chassis, A.A. Archangeľskij - fuselage and steering, E.I. Pogoskij - engine accessories and I.I. Pogoskij - engine assembly and storage. After several clarifications of the requirements by the management of the VVS, its final form is stable in December/December 1929. For the first prototype are selected four Curtiss Conqueror engines with an output of 600 hp, which will later be replaced by domestic M-17.

After processing the calculations and production of models, a model of the machine is approved on March 21, 1930, and a functional prototype is built in a short time, so that as of October 31, 1930, the aircraft has been tested at Frunze Central Airport in Moscow. Due to the fact that the tests are performed in winter, specially made skis are mounted on the chassis legs. Later, tests show that the flight characteristics of the ski machine were the same as when using a wheeled chassis. The skis have dimensions 5540 x 1460 mm, tail ski 1000 x 450 mm. Shooting towers were already installed in the fuselage, but so far without weapons, no bombing equipment was installed.

The first flight with ANT-6 (initials of the name of the chief designer - A.N. Tupolev), after the elimination of defects found on the ground, was performed by the crew led by test pilot MMGromovo on 22.12.1930 and even then it turned out that the aircraft has very good flight characteristics. However, the flight itself almost ended in disaster. During take-off, it turned out that the control part of the Conqueror engines of the American company Curtiss is not sufficiently fastened, and as a result of the vibrations, the engine power dropped sharply. Only thanks to the enormous efforts of the pilot did the machine manage to detach itself from the runway and fly over the hangars of the central airport. The flight itself then took place only thanks to the fact that the flight engineer held the controls in place with their hands. This shortcoming was eliminated after landing, and therefore, after performing further tests, representatives of the Soviet Air Force on 20 February 1931 could clearly recommend the aircraft for series production, with the proviso that foreign engines Curtiss Conqueror will need to be replaced by Soviet M-17s.

The aircraft was returned to AGOS for engine replacement and troubleshooting. In particular, the radiators were enlarged, the tail section was also enlarged and CAGI wooden propellers with a diameter of 3.5 meters were installed. The chassis also did not remain unchanged - the original wheels, respectively. tires of the English company Palmer measuring 2000x450 mm proved to be insufficient and were replaced by domestic ones measuring 1350x350, which were arranged in tandem in separate trucks. Another change was the installation of retractable turrets under each wing console and the installation of external wing and fuselage bomb hangers.

On October 10, 1932, the state tests of the machine finally took place, when the machine was piloted by test pilot Andrej Borisovič Jumaščev and chief engineer - pilot Ivan Fedorovič Petrov. The tests were successful despite minor reservations, the aircraft was recognized as combat-ready and was accepted as a model (standard) for serial production in 1932. Serial production of the machine with the official name TB-3 (тяжелый бомбардировщак - heavy bomber) was launched in plants No. 22 and No. 39, plant No. 38 supplied complete tails of the fuselage. The first production series of nine pieces left plant No. 22 in April 1932 and was intended for demonstration at the May Day military parade.It was the speed and the need to meet the deadline at all costs that negatively affected the quality of the machines in this series, and therefore, after being shown at the inspection, the aircraft reach the units much later after removing a large number of deficiencies.

However, production gradually starts and reaches remarkable volumes - for example, in 1933, only one of the plants has several aircraft a day out of the assembly lines! It is precisely because of the need to deal with large-scale production of aircraft of this class that new technological processes are introduced and mastered, and from the ground up a new production organization, and more importantly to the creation of a group of highly qualified engineers and workers. It is this fact that will later have a significant contribution to the design and manufacture of much more complex aircraft.

TB-3 with M-17 engines, which make up about half of all produced pieces, are in the arsenal of VVS from 1932 to 1939 and after decommissioning are handed over to Aeroflot. Here they have been used under the designation G-2 (Г-2 грузовой второй) for many years as trucks.

Already after the construction of the first prototype in the autumn of 1931, the need arose to modernize the TB-3. In particular, it is planned to replace the M-17 propulsion units with more powerful M-34 in order to increase speed, increase access and range, as well as to strengthen bomb and defensive shooting equipment.

Since 1934, they have been based on production lines TB-3 with modernized engines M-34R (М-34Р), which significantly improved the flight characteristics of the aircraft. Thanks to new engines, machines with disassembled armament were able to make long-distance flights to Warsaw, Paris and Rome in 1934. This year there is a further modernization of the TB-3, consisting in the installation of new engines M-34RN (М-34РН) equipped with compressors, improving the aerodynamics and defense equipment of the aircraft. Such improved machines have been mass-produced since 1935.

The years 1936-37 are marked by records for the TB-3. First, in 1936, pilot AB Yumashev managed to break several world records in carrying cargo, and then in 1937, the crews of four specially remodeled aircraft piloted by M.V. Volodyanov ( М.В.Водопьянов), V.S. Molokov (В.С.Молоков), I.P.Mazuruk ( И.П.Мазурук) and A.D. Alexejev (А.Д.Алексеев) will make a unique landing and landing of a polar expedition led by I.D. Papanin ( И.Д.Папанин) directly on the ice in the North Pole area.

A total of 819 aircraft of all versions of the TB-3 were produced.

TB-3 bombers have been involved in many conflicts. They fought against Japanese troops at Chalchyn Gole, dropped bombs on Finland's defenders and took part in the invasion of Beckov Poland.

Although at the time of the German invasion of the USSR on June 22, 1941, the TB-3 aircraft were conceptually hopelessly obsolete, there were 516 machines of this type in the VVS and 25 pieces were included in the naval aviation ( ВМФ). Although they had almost no chance against the aircraft of the German Luftwaffe during the day, they were able to perform their tasks successfully at night. They served as bombers and airborne or transport vehicles almost throughout the war.

A special chapter is their use as a carrier of fighter aircraft. Work on the idea of providing fighter protection for TB-1 and TB-3 bombers during long-range raids by aircraft carried directly on the bombers (Zveno Project) began in the years before the war. After its outbreak, this idea was slightly modified and a total of six pieces of TB-3 were converted to carriers of dive bombers, created on the basis of a widespread fighter I-16. One TB-3 thus carried two I-16s under its wings, each with a suspended 250 kg bomb. As early as August 1, 1941, two TB-3s, each with two "ishaks" under their wings, launched a raid on the Romanian Constanta. At a distance of 40 km before the target, I-16 separated from the carriers, each dropped their deadly cargo on oil tanks and returned safely to the base in Odessa.However, the most famous were probably raids on a heavily protected target - Čiernovodský bridge (нерноводский мост), when Zvená on 11 and 13 August 1941 destroyed the pipeline with precise interventions and damaged the bridge feathers. .

It was therefore the obsolete TB-3, which fell on the difficult and ungrateful role of the "soldier of 1941". However, both the machines and their crews honestly fulfilled their tasks during the most difficult days of the war, so it is no surprise that the first post-war air show on August 18, 1945 was given three ТB-3 honor to fly in the lineup with modern aircraft.

TB-3/М-17 - by the end of 1933 about 400 machines were produced
ТB-3/М-34 - about 100 aircraft produced; in addition to the different engines were typical bomber gondola under the nasal part of the fuselage
TB-3/М-34R - in addition to the engines, it also differed from the previous versions by the installation of the tail shooting range
TB-3/АМ-34RN - had engines АМ-34RN and reworked shooting ranges with machine guns ŠKAS cal. 7.7 mm
TB-3/АМ-34FRN - new engines and at the same time a redesigned chassis with one large wheel on each chassis leg; the shooting range in the nasal part of the fuselage was also redesigned; the corrugated sheet coating was replaced by a smooth one; 100 aircraft of this version were produced
TB-3/АМ-34FRNV - the latest version similar to TB-3/АМ-34FRN, but with a covered upper fuselage shooting range and engines АМ-34FRNV with a power of 1200 hp; about 100 aircraft were produced
TB-3D - made a single specimen with diesel engines АN-1 designed by Čaromský ( оаромского)
АНТ-6А - a series of five TB-3/АМ-34R aircraft with a covered cabin, special equipment for the Arctic regions; it was used from 1937 to 1944 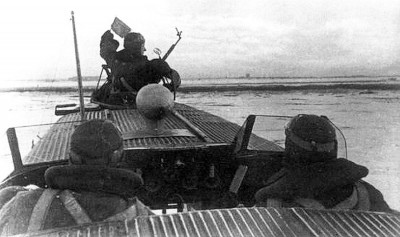