URL : https://www.valka.cz/Fort-Valmorbia-t124300#423447Version : 0
Karel Oktábec MOD 9 years ago
Austro-Hungarian Werk Valmorbia was the only object planned fortress occlusion of the Etsch-Arsa, the construction of which was in the beginning 1. world war I not only initiated (1911), but also taken to stage at least a partial application. The fortress was built on a rocky promontory of the eastern slope of the valley, Vallarsa, above the town Valmorbia (Pozzacchio). On top of the outcropping (908 m asl) has been prepared concrete monolithic base for one observation and two rotary artillery armored towers. In may 1915 it was under this future artillery batteries stamped in the rock of the three floors of corridors and rooms. Underground fortu was the hallways connected with both artillery batteries, with týlovým moat vylámaným across the papilla. At the southern end of the trench was the main entrance to the fort, protected kulometným position located in the heart of rock bridge, which was left during the excavation of the trench at approximately one-third of its length. At the northern end of the ditch served to protect it and to postřelování the western edge of the concrete kaponiéra, protruding from the corner of fortu. For the accommodation of the crew in times of peace served the barracks and headquarters building, built about 150 meters from the northern edge of the trench. Here also ended the service road, passing in the final stretch of the two tunnels, of which the closer to the fort was both a patrolman and kulometným unit to protect the access roads. From this tunnel was at a later period of the war penetrated the corridor ending with the staircase that led to the underground fortu.

After the outbreak of the 1. world war ii the war in August 1914 the construction work continued, but already in march 1915, the austrian command decided that in the case of the Italian attack unfinished fortress rather clear. Ready armored turrets for the 10cm howitzers were therefore taken back to the Trientu and place them into improvised position in the underground fortress located 5 field guns and 23 guns, that served the crew of 5 officers and 206 men from the ranks of the 1. vigilante police assistance company and 1. company a battalion of the fortress artillery no 4. At the end of June 1915, however, and the crew retreated into field position before the Roveretem and the fortress without a fight took the Italian army...

In may of 1916 was launched the austro-Hungarian counter-offensive known as "May", possibly (but not in the austrian official documents) "Strafexpedition", i.e. literally "the Punitive expedition". In her course have obtained the Austrians Werk Valmorbia back and fort at the time was in the deep rear. After the termination of the offensive gave way to the austro-Hungarian units on the better hájitelnou line Zugna Torta - Werk Valmorbia - Monte Pasubio, thereby Werk Valmorbia once again became a front position. At that time it was your station commander IV. battalion regiment of the provincial shooters no I the captain Platter. The commander of the 4. company of this battalion, stationed north of the fort in the tunnel-the gatehouse, was lieutenant Alfred Enrich.

In the early morning hours of 29. the June 1916 incursion into the grounds of the fortress the soldiers of two companies of the Italian 72. infantry regiment of about 600 men, led by captain Gilberto Bernasconi. They made it behind the retreating austrian soldiers and in the first moment with this war stratagems succeed. Underground fortu they may penetrate failed, in the hinterland areas of the barracks, however, was captured by the crew of the austrian battalion and its commander. Praporní radioman managed to telephone to warn of the habitat company commander Enricha and he immediately led his 60 men into a counterattack. In his over him, at a cost of seven killed and twenty wounded, managed to free the captured staff officers, killed six Italian officers and 168 soldiers, and capture four officers and 300 soldiers and the other rout. Due to the fact that the fall of the fortu Valmorbia in Italian hands would have most likely meant the collapse of an entire section of the Etsch-Arsa, was the backup commander Alfred Enrich for this act awarded the knight's cross the order of Maria Theresa.

After the rest of the war remained Werk Valmorbia in austrian hands. It is currently freely accessible and despite its incompletion is a unique example of a fortification object, which concept ahead of time of its formation, perhaps by decades. 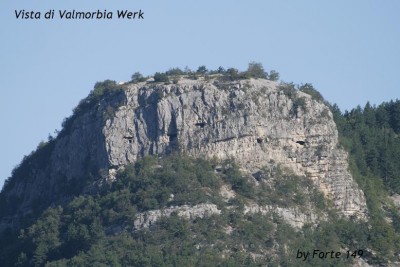 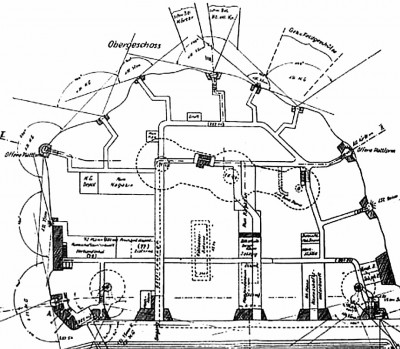 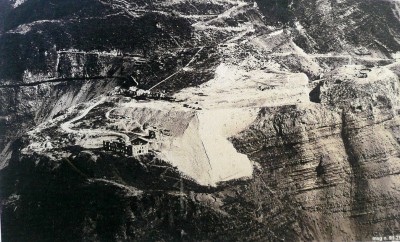 
1. Entrance.
2. Hallway with stairs to the lower floor and shooting the cavern in the direction of the Matassone.
3. Two staircases to the lower level (marked in orange).
4. Staircase(an elevator?) shaft 4 x 6.5 m, partly buried rocks and upwards open.
5a-e. Five shooting caverns (in the cavern 5e are two gun emplacements) in the direction of Valmorbia.
6a-b. Two shooting the cavern in the direction of the mountain pass.
7. Concrete kaponiéra to postřelování saddle and trench.
8a. The corridor to the kaponiéry.
8b. Staircase to the corridor, which connects the fort with the tunnel on the driveway.
9a. Room 20 x 9 m with a corridor leading into the ditch.
9b. Room 20 x 9 m.
10. Room with a length of 22 m.
11. Ramp between rooms.
12. In part, that the access shaft (impassable) to two firing units in the stone bridge.
13. The staircase to the firing stations at the stone bridge.
14. Room with a length of 22 m, a very difficult to access.
15. A stone bridge with two firing units to protect the ditch.
16a. Room 7 x 7 m with the passage of the three shooting caverns the direction of Matassone.
16b. The room is 16 x 7 m with the passage of the missile cavern direction Matassone.
16c. Room 12 x 5.5 m separated by a brick partition from shooting the cavern direction Matassone.
17. Missile cavern, the direction of the Matassone.
18. The staircase without the stairs, with a height difference of 1.5 m and a smooth and vhkým surface.... 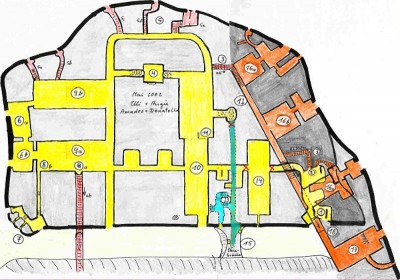 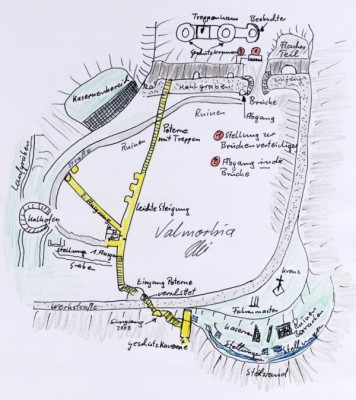 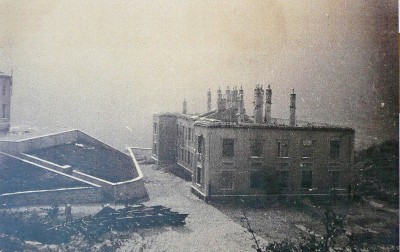 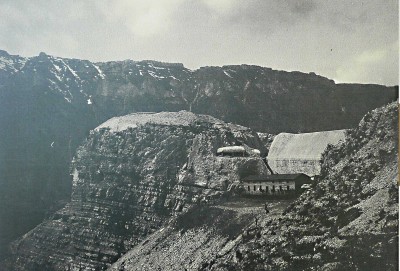 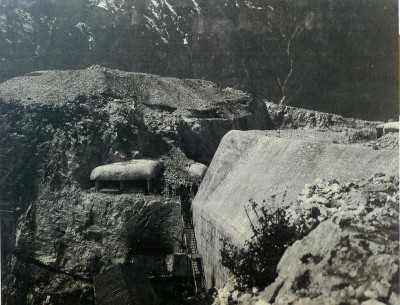 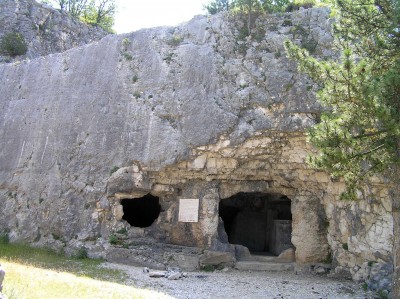 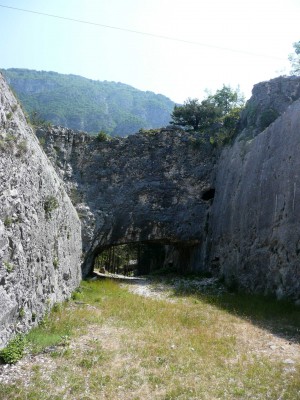 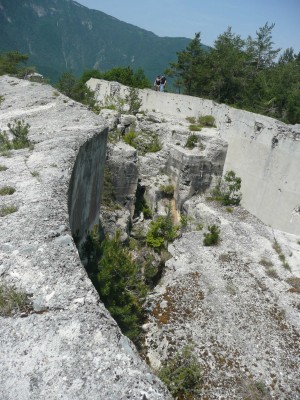 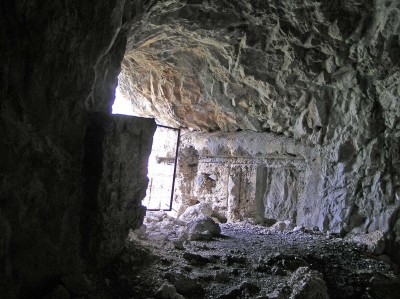