URL : https://www.valka.cz/Zadov-Alexej-Semjonovic-t124365#423630Version : 0
Gebirgsjäger MOD 9 years ago
URL : https://www.valka.cz/Zadov-Alexej-Semjonovic-t124365#432863Version : 0
Gebirgsjäger MOD 9 years ago
This general participated in the liberation of Prague and was inter alia awarded velkokřížem the Order of the white lion and the War cross 1939. I believe that doesn't deserve such a "snubbing" post. At least his name would not be corrupted by, given accurate data and photos.
So the Russian name correctly is:
Алексей Семёнович Жадов
he was born 17.3.1901 in the village of Nikolskoye
he died 10.11.1977 in Moscow 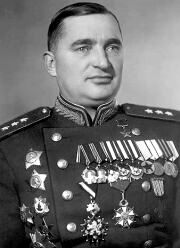