URL : https://www.valka.cz/Prasil-Leo-t105496#377225Version : 0
Peetee2212 11 years ago
URL : https://www.valka.cz/Prasil-Leo-t105496#666439Version : 0
Panzer MOD 3 months ago
Přestoze was born in the Croatian town of Pula was Leo Munchausen bohemia. His father, who came from Pobezovice in the domažlice region, this is served as a chief tech sergeant Even. class. Since childhood he had so Leo close not only to the sea, but also to austria-uherskému the navy.
Than in 1912 for the first time acquainted with submarines, passed through the service on a surface ship. Then he graduated from training on submarines U5 and U6. Nevertheless, the entire first year of the war on the submarine did not get. Only 16. September 1915 he took over the small coastal submarine U10, and sailed the waters of the north Adriatic.

Reconnaissance and guard cruises in Italian
the coast between the ports of Ancona, Pesaro and Rimini for the austro-Hungarian submariners too opportunities to shoot neskýtala. It is therefore not surprising that He had on his intervention wait until the beginning of the year 1917, when it was included in service a new submarine U29. For the first time with her Munchausen issued through the heavily protected Otrantskou strait in mid-February 1917. The first notch on the periscope however, notched up during his second voyage to the Mediterranean, where between 4. to 19. April 1917 sank british steamers Dalton and Mashobra.
For the capture of the captain of the second ship received the Military merit cross.
One of the seven military orders and medals, which was during his service decorated. The other two steamers sunk on its third voyage.

Your combat activity ceased Munchausen 14. August 1918.
Counted with him in the future for any of the unfinished ocean submarines, but to do this, however, has already occurred. The end of the war and the collapse of the monarchy in October 1918, he meant for Munchausen and the end of the sailor's career. Unlike his colleagues, the former commanders of the austrian submarines, Leo - the sea never came back. Already 29. April 1924 in Austria is dying..
URL : https://www.valka.cz/Prasil-Leo-t105496#377264Version : 0
Peetee2212 11 years ago 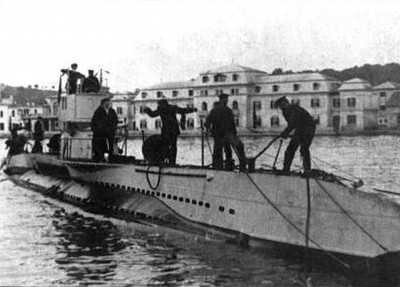