URL : https://www.armedconflicts.com/SOV-T-42-projekt-supertezkeho-tanku-t106178#647066Version : 0
Gebirgsjäger MOD a month ago
Soviet military doctrine adopted in the twenties of the last century assumed that a condition for victory in the next war will be the deployment of a large number of medium and heavy tanks. In July of 1929, adopted by the Council of people's commissars of intent for the development and production of new types of tanks – including those heavy, and the Office of motorization and mechanization of the Red army then formulated their basic technical parameters. Because no soviet engineer did not have experience with the construction of large armored vehicles, there was a need to seek knowledge abroad. The logical choice was Germany, which since 1922 (signature Rapallské contract) there was intense cooperation on weapons development. The end of the year 1929, she visited Germany, the soviet military delegation and offered a treaty, its weapons designers willing to travel to the USSR and to work there in the development tanks. A small group of volunteers led by ing. Eduardo Grottem, an employee of the company Rheinmetall, in march 1930, she traveled to Leningrad, where to take the project management at tank design office in the the saint petersburg state arms, optical and steel plant Bolshevik.

Although the Grotte nor any of his co-workers didn't have the knowledge from the construction of the tanks, just six weeks after arriving in Leningrad presented to the State committee for the defense of the first design of the medium tank, TG (Tank Grotte). The chairman of the Committee Kliment Voroshilov after a cursory viewing, the project has been approved by and Grotteho team then put in July 1931 together unarmoured functional prototype, which when tested failed and it was decided to abandon the project (some of his technical solution was subsequently used in the construction of heavy tank T-35).

Grotteho the team remained in the Soviet union yet another year, while further wasted soviet resources, and before he was quietly sent back to Germany, presented a phantasmagoric project superheavy tisícitunového monsters TG-IN and his the smaller little brother – T-42 about the weight of "only" 100 tons.
(It is worth noting that the Grotte found in the construction of the superheavy tanks of affection and stood also behind the project of the German monsters Landkreuzer P. 1000 Rat).

Design stotunového T-42 14 - 15-man crew was similar to the design of T-35 and its prototype T-35-1. A place for the driver was in the front part of the hull, moto-gear space in the rear part. Power unit tank constituted for the designers main challenge, because the power of the available engines at that time wasn't enough to propel stotunového of the vehicle. To tank could move at an acceptable speed, had to have its engine power about 2000 HP. Because of this powerful engine in 1932 was not available, were planned two diesel engines with output power 1 000 HP. The Tank had with these motors reach speeds of 20 – 27 km/hr.

Armament of the tank should be lafetována in a total of five towers arranged in two floors. The first floor would have consisted of four towers, in the two leading should be 45 mm tank cannon vz.1930 and 7.62 mm tank machine gun, model 1929, the same machine guns in two rear towers should be lafetované for the leadership of the anti-aircraft fire. Vyvýšeně stored the main tower should be armed with 107 mm cannon vz. 1910/30, modified for installation in tank. For the commander was also scheduled to machine gun DT-29 on the roof of the main tower.

Belts should be steel, the forward part of the chassis should be arranged from the twelve wheels located on six carts, with three wheels on the one cart in the center of the vehicle and one by one freely, while the front and back, with stretching around the bow and the propulsion at the stern.
For easier control of this monster to Grotte decided to apply electric power transmission, control, shift and the clutch should be controlled by servomotors.
Counted with a maximum armour thickness of 70 mm on the turrets and front hull.

As well as most of the superheavy tank developed in the twenties and thirties of the 20. a century after the world, the T-42 had almost no practical use. The sheer size and weight of such a tank, making him a perfect target, and the mobility of the tank was also dubious, starting with the actual movement on the battlefield (for example, the relocation of such a heavy machine over bridges, or the construction of the railway wagon, which would carry). For these reasons, and because of the disproportionate costs couldn't T-42 to play in the battle a decisive role. In the arsenal of the Red army was thus finally adopted significantly lighter (and cheaper) T-35. 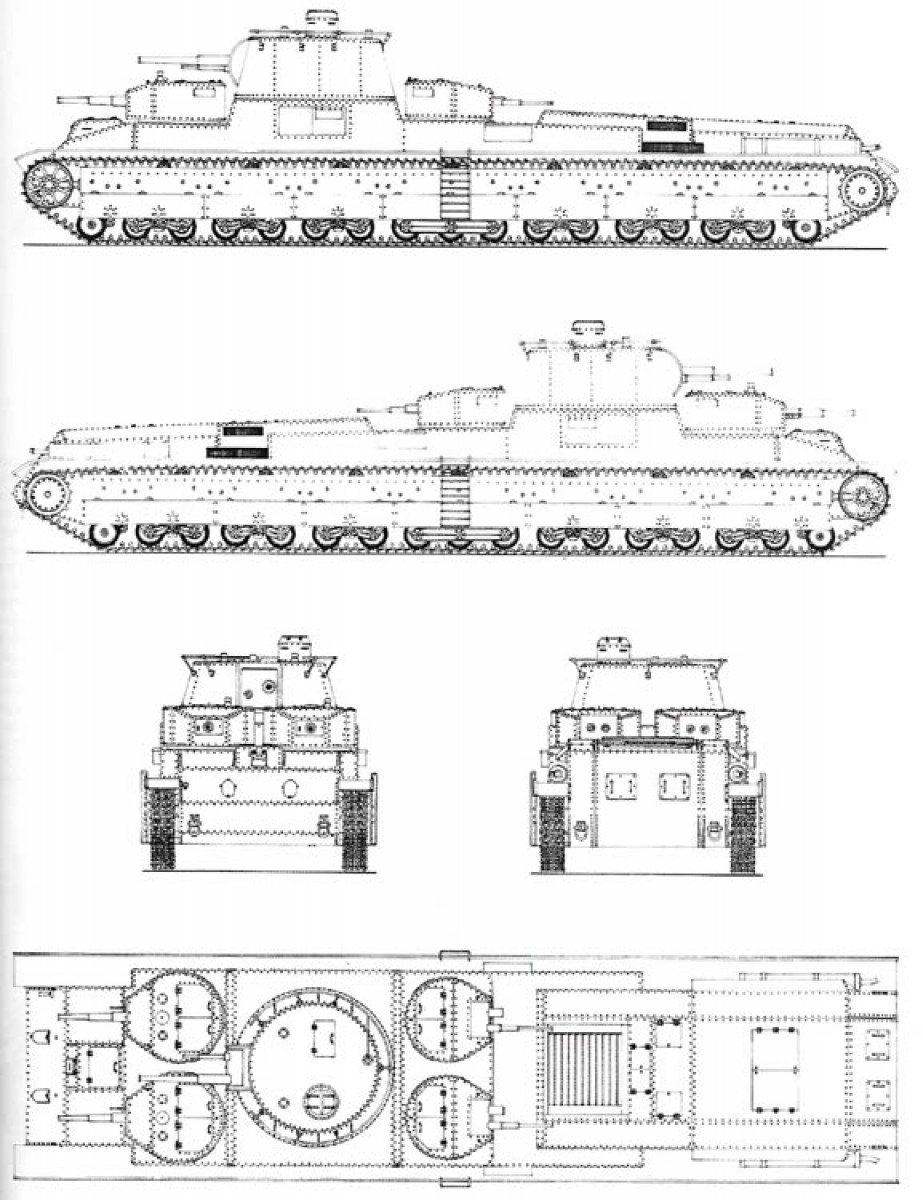 T-42 has a project ing. Grotte from 1932, based on the project TG-VI. This around the 100-ton colossus, a long about 15 meters, and protected by armor thickness up to 70 mm should be powered by Grottem proposed an engine power of 2000 HP (speed up to 30 km/h) or two engines AM-34 on the power of 800 HP (speed 18 km/h). Arm should be placed in the three towers and should it form the canons of the caliber 107 mm, 76.2 mm and 45 mm and 3-4 machine guns, caliber 7.62 mm, or in five towers - 1x 107 mm, 2x 45 mm and 4-5 machine guns of 7.62 mm and 12.7 mm. Steering and shifting should be controlled by servo motors, also the clutch.
For the amount of reservations (the complexity, the estimated excess weight, a little dexterity, the expected logistical and repair issues) has remained a project only on paper.