Raoul Hafner created his first aircraft design in 1929 in Austria - a helicopter. In 1937 he came to England, where he continued his efforts to develop a successful gyroplane. He continued with other proposals that took into account the requirements of the original specifications of the Ministry of Aviation for the helicopter.

Since 1940, he has been in charge of a team developing a rotor-powered vehicle at the Airborne Forces Experimental Establishment in Hampshire, where the idea of using a rotor instead of a parachute to more accurately transport troops to enemy territory arose. The landing, dropped from airliners for a relatively long time on conventional parachutes, was usually scattered over a large area after landing, and often its members failed to reunite at all.

Meanwhile, in the late 1940s, Hafner was working on full-size Rotachute designs, while addressing the issue of their effective deployment. One of the proposals was to carry several of them on a rail hinge on the ceiling of a modified aircraft to transport units and quickly release them one by one from the tail of the fuselage to land in as tight a group as possible.

The Rotachute has been designed to meet the requirements of simplicity, light weight and reliability. This meant a frame, welded from steel tubes, on which a pilot was seated on a simple seat, and which carried a two-bladed rotor with wooden, freely rotating blades. A landing gear was attached to the frame, consisting according to the original idea of two wheels on a continuous axis, later a rubber-sprung landing gear was added. The fuselage was open at the front. This post practically overlapped the pilot with his figure. The fuselage gradually narrowed behind the pilot, which helped to stabilize the machine. All this was covered with a rubberized fabric, without a complicated reinforcing structure. It was assumed that the onslaught of air generated in flight would pressurize the rotor body into a solid shape. Two horizontal stabilization surfaces were placed perpendicular to the vertical axis of the stern of the fuselage. This simplicity was driven by a single purpose: to minimize weight and storage requirements.

The rotor had two wooden blades anchored to the center by steel pins. The rotor hub was connected to a small vertical rubber block as a universal joint to dampen vibrations and at the same time act as a hinge to allow control of the rotor. The control was by means of a simple rod attached to the rotor hub. The controls worked exactly the opposite of the aircraft controls. To climb, it was necessary to push the steering column forward; for right tilt, the steering column was tilted to the left. It caused the flight attendants considerable problems, it was compared to their experienced habits.

The Rotachute thus designed weighed 50 pounds (22.7 kg) and carried a payload of about 240 pounds (109 kg). It could consist of a pilot, his parachute and a machine gun model Bren Mk.1 with 300 rounds. The machine itself was not armed in any way.

The rotor had a diameter of 15 feet (4.57 m.), Thus creating the smallest device capable of controlled flight, which abducted a man equipped for combat.A contract was signed for the production of Rotachute and pre-flight tests began, tests were performed with both rotors and a complete unit mounted on moving vehicles (see pictorial appendix). The first flight took place on February 12, 1942.

Two attempts, held in Ringway in February, ended in an emergency landing, overturning machines and breaking rotors. The third, made on the longer runway at Snaith, was a little better, so it was decided, at least for training purposes, to add a three-point wheeled landing gear to the structure (more suitable than a throw-away trolley in the designer's opinion), and stabilization areas at the rear. . This modification required an extension of the streamlined surface of the tail, which in its original form was no longer strong enough to prevent the rotor from jamming without the addition of another reinforcing structure.

Therefore, a light frame and a stabilizing surface were added, the whole was pressurized by the onslaught of air created by the forward movement of the machine. The new Rotachute Mk.II took off for the first time at the end of May 1942, towed behind a jeep and made about 15 seconds of flight. Further tests led to satisfactory flights from the ground lasting two or three minutes. Work has now continued with the Mk.III model.

Tests began on the Ringway Mk. Tests Mk. III began on the Ringway on June 16, 1942, with flights in tow lasting about four minutes and ending with controlled landings. A completely free landing followed. The Rotachute was then further tested to establish rules for proper launch procedure. First, the Rotachute detached from the ground and only then did the tug Tiger Moth detach from the ground. Other flights tested air launches. The Rotachute was able to reach an altitude of up to 3,900 feet (1,189 m), a maximum speed of 93 miles per hour (150 km/h) with a maximum flight length of up to 40 minutes.

The following tests using Rotachute dealt with the development of the Rotabuggy, a jeep equipped with a rotor and a system of tail surfaces in an almost identical arrangement, but this is not the content of this paper.

On April 29, 1943, the first Rotachute Mk.IV took off, with 2 plate-shaped vertical surfaces added to the stabilizing tail surface. Five earlier machines were modified to this standard. During the tests, the machine was thrown from a height of up to 1100 m.

In evaluating the results, the Rotachute was found to be literally the simplest device, designed to fly and land in a well-defined area. However, the operational needs for which it was designed never arose. However, experience from the development of Rotachute provided the basis for much current knowledge about a light machine equipped with a rotor. The change in British military policy in 1943 then meant the end of all development work. It is interesting to note that among the pilots of towing machines participating in the test flights was a Pole, lieutenant Kazimierz Plenkiewicz

Production and deployment:
A total of 21 pieces. They were never deployed in combat, all built pieces were used for testing and development. In the museum collections of the Museum of Flying preserved 1 piece. Mk. III. 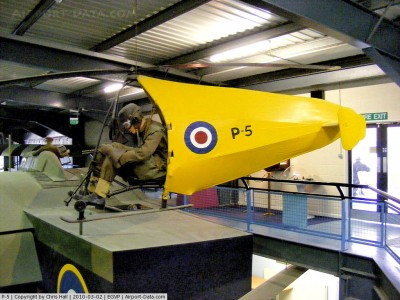 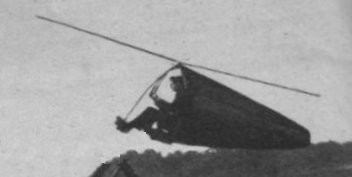