Aki was ordered based on the results of the ongoing Russo-Japanese War. It was the second battleship designed and built in Japan after Sacuma. Construction was extended by 10 months because priority was given to completing the cruiser Cukuba. This made it possible to fix project bugs discovered during the construction of Sacuma.
It was the first Japanese turbine-powered battleship. This allowed it to sail at 38 km/h during tests in December 1910. The turbine engine was imported from John Brown of Scotland. He requested a third chimney and an enlargement of some dimensions.
In World War I, from August 1914, it was designed to protect shipping lanes in southern Japan in the South China and Yellow Seas. She did not take part in any battle. On November 16, 1914, she ran aground on a sandy bay in Tokyo Bay.
Under the Washington Maritime Agreement, it was decommissioned on September 20, 1923 and was used as a naval target. At an exercise south of the Boso Peninsula, it was sunk on September 7, 1924 by ships Nagato and Mucu. The Crown Prince and top generals were also present. Some large cannons were rescued and used in coastal artillery batteries around Tokyo Bay. 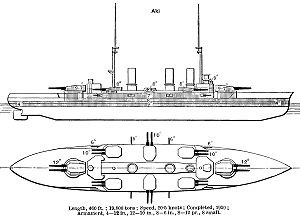 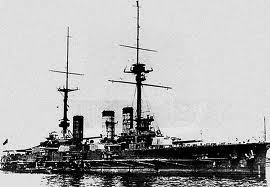