After experience with the first serial tanks T-54 model 1946 in 1948 work began to improve the design of the medium tank (this work was accelerated by the decision to stop further serial production of tanks T-54-1 in January 1949 until the deficiencies were rectified). Individual elements of the design to solve the problems T-54 model 1946 were tested on five prototypes built during 1948 and serial production of the new model began during 1949.

The main distinguishing feature of the modified T-54 was the new tower (without narrowing the lower part from the front), which was characterized by its niche in the rear (this niche was also smaller than the T-54-1 tower). The remaining constriction in the rear has also been reduced to the minimum necessary to open the driver's cover. A command tower of a new construction appeared on the tower. The change also occurred in the placement of the cannon, where the armor mask was absent (in the tank T-54-1 was dismantled at the same time with the cannon facing forward). The absence of a mask made it possible to change the front shape of the tower and achieve higher resistance to puncture (in the front part of the tower remained for the installation of the cannon shooting range with a diameter of 400 mm). The change of the tower also brought a different placement of the cannon, the attachment of which was moved backwards by 60 mm and down by 25 mm, which also enabled an overall reduction in the height of the tower. However, the new cannon mounting focused on durability complicated its replacement (the rear of the tower had to be dismantled). Other changes occurred in the frontal armor of the hull. As about 90% of all tank interventions in combat situations were higher than 1 m above the ground, it was decided to reduce the thickness of the front armor plate of the tank hull from 120 mm to 100 mm, thereby reducing the weight of the tank. The thickness of the side body armor (80 mm) and the front armor of the tower (200 mm) remained unchanged. The fixed machine guns above the belts were removed. Instead, a fixed 7.62 mm machine gun (firing through a hole in the front armor plate) controlled by the driver was installed to the right of the driver. Said installation allowed the machine gun to be recharged, or the fault to be eliminated without leaving the interior of the tank. For 7.62 mm machine guns, the tank carried 3500 rounds. In connection with the change of the tower construction, the conductor manhole was also changed from round to bevelled. The mounting of the anti-aircraft machine gun was also changed (with the possibility of full-circle shelling without the need to turn the tower).

An independent oil and engine heating nozzle system was added to the engine compartment (by burning diesel in a separate combustion chamber), and a new oil multicyclone air purifier with ejector dust extraction was installed. In connection with the lowering of the tower (canceled narrowing in the lower part), there was also a complete reconstruction of the engine cover, where all outwardly projecting parts within the range of rotation of the tower were minimized.

To improve the driver's work during a sudden decrease in visibility, a tank navigation device - a gyrocompass GPK-48 - was installed in his space, allowing to keep the set course for 15 minutes. To reduce the specific pressure, the width of the strip was increased by 80 mm to 580 mm, whereby the specific pressure was reduced from 0.93 kg/cm 2 to 0.81 kg/cm 2. The steering design has been modified. Cylindrical outer cylindrical fuel tanks were replaced by a pair of flat rectangular tanks (above the fenders in the right rear of the hull) directly connected to the fuel system so that fuel is primarily pumped from them and only after depletion from the tanks located in the hull.

The modifications made it possible to reduce the weight of the tank to about 35,500 kg.

Part of the tanks was later upgraded to the level of T-54B while maintaining structural differences (tower). 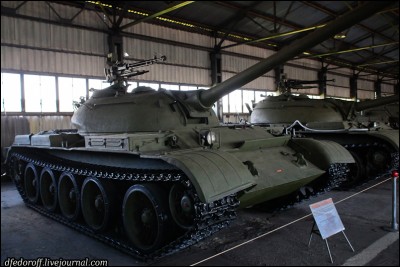