Long-range self-propelled cannon howitzer designed to fight artillery and mortars of the enemy, to silence and destroy the command posts, fire and radio equipment and manpower of the enemy, demolition of permanent defensive structures and field defenses. The transition from the marching to the fighting position takes 60 seconds, the opposite process takes 30 seconds.
Thanks to the positive experience of the South African army with the G5 towed cannon, there was a demand to mount this weapon on a mobile chassis, which would create a new self-propelled cannon howitzer - a replacement for obsolete Sexton guns.

Lyttleton Engineering Works therefore began developing this vehicle in 1979, the first prototype of which was completed in October 1981. The second prototype followed immediately (one of the first two prototypes was made of conventional structural steel). The new weapon received the designation G6. During the years 1982 to 1986, two more prototypes ( advanced development systems ) were produced, which together with the first two specimens underwent extensive tests. In 1987, these machines were supplemented by four other pre-series specimens ( engineering development systems ), which had modifications taken into account in their design, the need for which arose during the testing of prototypes.

In 1988, the final tests took place and preparations for series production began. One platoon of G6 howitzers was deployed against Angolan and Cuban forces during the Battle of Cuito Cuanavale, which lasted between August 1987 and March 1988.

The chassis of the G6 howitzer is welded from steel armor plate, the bottom is doubled to increase mine resistance. During tests of prototypes, the howitzer withstood explosions of Soviet TM-46 anti-tank mines. The chassis with independent suspension has a permanent all-wheel drive (prototypes had a switchable front axle drive). The 21.00x25 tires have run-flat inserts, and the G6 is equipped with a central inflation system.

In front of the body there is a driver's station, behind which is located a drive unit with an automatic transmission. The engine-transmission compartment is equipped with a fire detection system and a fire extinguishing system. The volume of the fuel tanks is 700 liters. Ammunition is transported on both sides of the rear of the hull: 45 rounds and 50 rounds. During firing, four hydraulically operated stabilizing supports located between the first and second axles are extended.

In the tower there is a station for the remaining five crew members - the commander (sitting to the right of the barrel), the shooter (workplace to the left of the barrel), the barrel operator, charger and ammunition feeder. The front of the tower can withstand ammunition up to 23 mm caliber. The main weapon consists of a modified 155 mm cannon with a main length of 45 caliber taken from the G5 type which has an ejector and a reinforced back in two thirds of the length. The recoil system consists of a recoil brake, a gate and a refill. The turret has a measuring range of 140 ° (70 ° on each side of the longitudinal axis of the howitzer, shooting can be conducted everywhere in the range of ± 40 °), electro-hydraulic control with the possibility of manual control in an emergency. The control of the main weapon is again electrohydraulic with an elevation of -5 ° to + 75 °. At the rear of the tower there is an auxiliary drive unit with an output of 34 kW for charging the batteries and driving the air conditioning, which can also serve as a filter ventilation device.
The main entrance to the tower is secured through a door located on its right side. There is a pair of hatches on the ceiling of the tower. An M2 machine gun is mounted in front of the charger cover caliber 12.7 mm, from which it is possible to fire at ground and air targets. On the sides of the tower there are four holes for guiding shooting from R4 rifles. On both sides of the front of the tower are mounted four-barreled smoke grenade launchers caliber 81 mm.

The semi-automatic hydraulic charging device is mounted on the left side of the barrel. The bullets are placed on the charging tray manually. The cartridges are placed directly in the back of the barrel. A well-trained crew can fire at speeds of up to 3 rounds per minute. After these shots, the shooting with the maximum charge can continue for about 15 minutes. During this time, the temperature in the charge chamber is monitored to prevent possible damage.

Howitzer G6 (as well as towed G5) were equipped with the South African fire control system AS80, which allowed the simultaneous control of four firing tasks of firing units numbering up to eight guns. The heart of the device was a 16-bit computer that processed information from the muzzle velocity analyzer EMVA Mk 10B and ground meteorological station S700.

Artillery regiments of the South African army equipped with G6 howitzers were made up of three firing batteries, each of which consisted of two platoons of four howitzers.

At the end of 1987, Industrias Cardoen entered into an agreement for the licensed production of G6 howitzers. In mid-1989, the first prototype was made with the designation CC-SP-45, which was subsequently involved in the test program. About a year later, however, the contract was terminated and production did not begin. In addition to the South African military, other users of G6 howitzers have been Oman and the United Arab Emirates. The army of the latter deployed a battery of G6 howitzers in 2015 during the intervention of Arab states in Yemen in the fight against Hussian militants in the fighting around the city of Taiz, located in the southwest of the country.
URL : https://www.armedconflicts.com/ZAF-G6-155mm-samohybna-houfnice-t11888#43342Version : 10000
Cichy 16 years ago
... 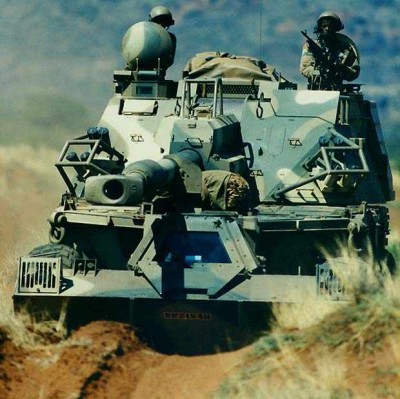 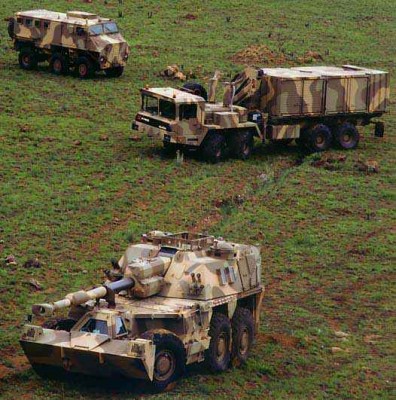 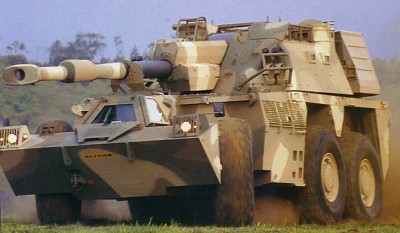