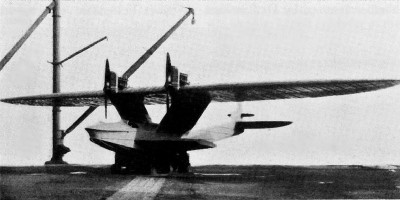 The first all-metal seaplane designed and made in Japan was built thanks to the private initiative of a patriotic society, known under the name of Teikoku Kaibo Gikai. Its members in September of 1922 found that in Japan does not produce any all-metal aircraft. The good qualities of this design have been already demonstrated in many other countries, this was the reason to make this project a patriotic association took.

Was established by the committee, to which were invited distinguished experts on the design of the aircraft. Gathered here the army engineers from PMBRA, the Aviation research institute in Tokyo, and tokyo university. This was a joint work of the army, navy and civilian workplaces.
The committee led dr. Aikichi Tanakadate and the other members are Narihisa Yokota, who was appointed the main designer, Yuzo Hishida, Matsutaro Honda, Shuhei Iwamoto, Yoshitake Ueda, Haruhiko Uemura, Hisakichi Akaishi, Masayuki Hori, Fumio Murase and Kyohei Arisaki, a little later they were in the committee invited two engineers Keikichi Satake and Jun Okamura. On the design and construction of aircraft participated in tokyo university, the army arsenal in Tokyo, and naval arsenal in the Jokosuce.

They were first laid down requirements for the performance, which had all-metal seaplane to reach, e.g., the maximum speed should be at least 200 km/h operating altitude 3 000 metres, the aircraft had flees a distance of 2 000 km and powered by should ensure the two japanese engines with an output of 200 horsepower. The aircraft was designed as a high-wing with the wing carried on two massive sloping pylons and at the point of connection of the wing and the pylons were installed engines. Ordered construction was one seaplane and one of the fuselage, which was designed for strength tests.

In 1923, struck Japan powerful earthquake, which construction had been delayed, was the airframe completed in march 1924, the dragon was subsequently, in July shipped to jokosuckého naval arsenal, where was he in December of the same year completed. The delay brought the engines originally were to be used japanese engines, that should provide the power of 200 horses at a height of 3 000 m, these engines, but late in its development and so the decision was made to use two engines BMW IIIa.

The resulting piece was a twin-engine hornoplošný flying boat of all-metal construction, the canvas was coated with a wings and control surfaces.

The completed aircraft was donated to the navy, the flight tests were conducted in Jokosuce, behind the wheel sat a test pilot commander Hisakichi Akaishi. Already during the first flights were found excellent flight characteristics and good performance, which gave the inkling that the required performances should be easily met. 22. in march 1926, during the seventh test flight disaster occurred, which killed the whole crew and the aircraft shattered on the surface of the ocean. The accident is attributed to failure of the engines, the seaplane was seen as sharply descends with both engines pledged. Sharp angle of descent led to the almost with the impact into the water. The crash was thus completed development and testing of the airplane, designers and engineers have gained valuable kušenozsti, which in 1928 used in the construction of seaplane Giyu Well.3.