was born on July 20, 1908 in Vrbice (since 1923 part of the town Liptovský Mikuláš) as the eldest son of Margita Lisická and Mikuláš Lisický, a trained planter.

He started going to folk school in Liptovský Mikuláš and from 1917 in Ružomberok, where the family moved. In 1918 he began to attend the Hungarian Piarist grammar school. In 1919, it became a real grammar school with Czechoslovak as the language of instruction, which he graduated with honors in 1926.

As he wanted to become a professional soldier, in October 1926 he went to volunteer to join the artillery regiment 201 in Ružomberok and later joined the officer's school in Prešov. From there he went to the Military Academy in the Borders, which he went out with artillery and was the first to be eliminated in July 1929 as an officer - a lieutenant in professional artillery. He went to the artillery regiment 202 in Prešov, but did not warm up there for a long time. It has been assigned to the 5th battery in Kežmarok. After 1930 he went to the Application School for Artillery in Olomouc, where he enlisted in the Air Force and from March 1, 1931 he joined the Military aviation school in Prostejov and started flying. Served in Piešťany in Air Regiment 3 gen. letca Milan Rastislav Štefánik. He was later assigned to VZÚ (Military Geographical Institute) to Prague for aerial photogeometry. From there he got back to Prostejov where he served from October 1, 1936 as a flying teacher and professor of aerial photogeometry until the collapse of the Czechoslovak Republic in March 1939. In 1940 he married on November 16 in High Tatras to Hrebienok. He had two children with his wife Wanda, born Kuciel. Son Nicholas and daughter Wanda. They lived in Trenčín, where at that time he was commander of 4. Air Division and crew commander.

He was completely disoriented by it. He strapped on his skis and ran to Ružomberok to the crew headquarters, where he learned what was happening: at 10 pm he got on the train the same day and came to Bratislava in the morning in a ski suit with skis. He took over the aviation department at the MNO and worked there for 14 days, until he got to his old crew in Prostejov, but the Germans were already there. After returning, he no longer worked at the MNO in Bratislava, he was appointed deputy commander of the air regiment in Piešťany, as well as a new commander of the flight school.

In the summer of 1940, Dušan Čatloš, the younger brother of the of the Minister came from Banská Bystrica from the Aviation Academy to Piešťany for exams and became that he accidentally failed during the exams and could not be disqualified as a lieutenant. Mikuláš Lisický was therefore summoned to the MNO to correct the exams so that the nominee did so. He refused. They therefore turned to the deputy Mikuláš Lisický lieutenant Július Trnka, who did so. Instead, he became commander of the school and Lisický v was transferred in August 1940 to Spišská Nová Ves as commander of airport. He worked there until January 1941. Then he went to the MNO for the head of the Air Force to Bratislava, there he was until the summer of 1943. Then he was sent for retraining for multi-engine bombers in Crimea. After returning from Crimea, he took over Bomber Squadron III at Poprad Airport.In July 1944, several trustees of political and military resistance groups came to Lisický to see if he would be willing to fly to the Soviet Union and transport certain people there. He promised to fly if necessary. On the evening of August 3, 1944, a courier from Banská Bystrica came to the apartment in Poprad with M. Lisický with a written order that the agreed departure will take place on August 4 at 1 pm from Mokraď Airport at Liptovsky Hradek to Moscow. General Jurech and Karol Šmidke were to fly with Lisický. Lieutenant Colonel Ferjenčík came in place of Jurech, who had already been arrested at that time. The flight was a success. From Moscow, he and his crew got to Poland to Czechoslovakia. Aviation Center 28.10.1944. All Slovak and Czech pilots in the USSR were concentrated there. She formed and trained from them 6.12.1944 1. Czechoslovak Mixed Air Division of 3 regiments in the USSR. Mikuláš Lisický was elected deputy commander of the division after the combat part and confirmed in office by order 4. 4. Ukrainian front. In that capacity, he also took part in the struggle for the liberation of Czechoslovakia and Ostrava. He flew to Prague on May 15, 1945 after the war. The 4th Air Division arrived in Slovakia on August 28, 1945. He remained the commander of the division Lisický only until October 1, 1948. He got a vacation waiting. On June 30, 1949, he retired, but did not retire. He was thrown on the pavement and had to look for a new existence on his old knees. He worked in a textile distribution room as an accountant. The military administration was having trouble with his apartment in Trenčín, so he had to move to Bratislava. He accepted the position of helper at geodesy in Bratislava. There he started "from scratch" and in addition to his job he started studying at SVŠT in the years 1953-1960, where he graduated as an engineer.

In the meantime, he was rehabilitated.

He died on March 16, 1987 in Bratislava and is buried in the cemetery in Borinka near Bratislava. 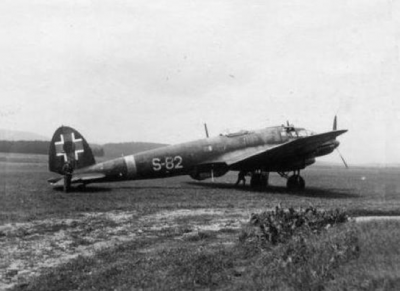 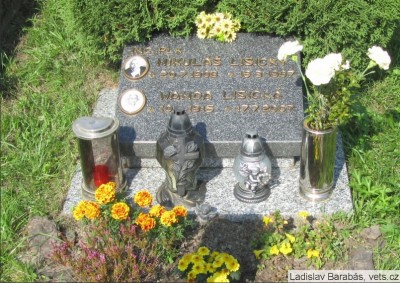