URL : https://www.valka.cz/Posileny-chorvatsky-pesi-pluk-369-1941-1943-t14061#657890Version : 0
Gebirgsjäger MOD 2 months ago
At the end of June 1941, less than two months after its inception, the Independent State of Croatia ([i] Nezavisna Država Hrvatska, "NDH")[/i] had to start fulfilling vassal obligations to its sponsor., allies and protectors - Nazi Germany. "Poglavnik" (leader) NDH Ante Pavelić convened a meeting with the military and civilian leadership of the state to discuss military participation in the invasion of the Soviet Union union. After obtaining unanimous consent and consultation with General Edmund Glaise von Horstenau, a representative of the German army in Croatia, the chief offered to Adolf Hitler to send Croatian volunteer units to the Eastern Front.

On July 2, Pavelic called on members of the land, air and naval forces to join the German allies in the fight against Bolshevism as soon as possible. The first was planned to establish an infantry unit with the strength of a regiment with about 4,000 men. Between July 3 and 7, to the surprise of the Ustasha authorities, over 5,000 (, according to some sources, up to 9,000) volunteers signed up. From the selected 3,895 officers, non-commissioned officers and members of the team, three infantry battalions were assembled - two Croatian in Varaždin and Zagreb and Bosnian in Sarajevo.

After their transfer to Lower Austria, in the Military Training Area Döllersheim were merged into an infantry regiment, which received the name of July 16 [b] Reinforced Croatian Infantry Regiment 369[/b ]. His team included a regimental staff with a staff company and three infantry battalions consisting of three infantry companies, machine gun companies, anti-tank companies, supply companies and artillery batteries. Later, a training and supplementary battalion was established in the town of Stockerau. The regiment grew to more than 5,000 soldiers. Its first commander was Colonel Ivan Markulj.

Formally, the regiment was part of the Wehrmacht, its members wore German uniforms and used German rank insignia. Their distinguishing feature was a red and white checkerboard shield with the inscription "Hrvatska" (Croatia) worn on the right sleeve and right side of the helmet. The unit was also called the Croatian Legion and the Croatian Volunteers as legionnaires.

After taking an oath of allegiance to Adolf Hitler, the chief, Germany and the Independent State of Croatia, a hurried, completely inadequate three-week training and order to move to the Eastern Front followed - by rail via Hungary to Dongena in Bessarabia and from there on its own axis to Ukraine. After five weeks and 750 kilometers of all-day infantry on muddy impassable roads, the regiment made its first contact with the enemy on October 1 near the village of Budinskaya, and on October 9, it joined 100 near Naděždovka. Light Infantry Division (later renamed 100th Hunting Division), operating in the group Army Groups South.

Due to insufficient training and equipment, the regiment was not initially deployed to combat as a whole, but its battalions and companies were assigned to various units of the division as needed. They operated with them along the Dnieper, in the vicinity of Kharkov, in Upper Donetsk and at the end of the year at the front along the Mius River.
From the records in the regimental war diary, it was clear that the main task of the regiment in this period was to improve discipline. The regiment had problems with it for the rest of 1941 and until the second battle of Kharkov in May 1942. More than a hundred legionnaires deserted, some were captured and shot. Cases of systemic indiscipline, theft, looting, rape have increased. On September 30, 1941, Commander Ivan Markulj returned 43 officers and non-commissioned officers and 144 legionnaires to their homeland for illness or disciplinary reasons, later four legionnaires were sentenced to death and executed for gross indiscipline, others were sentenced to imprisonment ranging from 2 to more. than 10 years.
According to the memories of German officers, the Croatian legionaries did not have a military appearance and acted so neglected that they were often considered Russian prisoners.

In mid-January 1942, the 100th Light Infantry Division was deployed in the area of the city Stalino to fight against the Soviet cavalry, which broke through the German lines. Until the end of the winter season, she fought hard along the Samara River. The commander of the division, Lieutenant General Werner Sanne praised the success of the regiment during the winter fighting, especially the field artillery action under the command of Lieutenant Colonel Marek Mesić, which he decorated on February 23, 1942 with the Iron Cross.

Beginning in 1942, legionnaires were allowed to send letters home. Messages for family members and friends were written on whatever paper the soldiers could find - cigarette papers or pages ripped from notebooks. The letters were subsequently read on Radio Zagreb ( later known as Hrvatski Krugoval) along with propaganda announcements. War casualties - the number of casualties, wounded and missing - were not disclosed by the authorities.

In the spring, the regiment proved itself during the second battle of Kharkov - Colonel Markulj, Lieutenant Eduard Bakarec and six other officers of the regiment were awarded the Iron Cross First Class, the Germans stopped looking at the legionnaires as unruly collection and began to respect them.

On September 24, 1942, during a visit to headquarters 6. armády, poglavnik Ante Pavelić honored and promoted a large number of legionnaires. Two days later, the 100th Hunting Division was deployed to battle for Stalingrad.

During the Battle of Stalingrad, Croatian legionnaires took part in the most difficult battles and paid dearly for it. By October 13, the regiment's strength was reduced to one weakened battalion and 2 separate companies. Of the original regiment and all reinforcements, which gradually arrived from the training facility in Stockerau, only 983 men remained. At the end of November, only 5 officers, 9 NCOs and 110 soldiers, suffering from a lack of food, weapons and ammunition, were ready to fight. On December 17, the Volga froze so much that it allowed the Soviets to open another front. On January 16, 1943, the Soviets launched a fierce attack on Croatian positions, and the last besieged legionaries fought desperately for survival. As supplies of food, ammunition, and medicine were almost completely depleted, the end was about to fall. On January 23, 1943, 18 wounded Croats were evacuated by air from Stalingrad. Among these lucky ones was Sergeant Jurić, who rescued the Kriegstagbuch ( regimental war diary) and thus preserved the memory of the Croatian Legion and its men.
A handful of surviving Croatian legionaries under the command of Lieutenant Colonel Marek Mesić surrendered to the Soviets on February 2, 1943 in the building of the Stalingrad Air Force Academy. Thus ended the history of the Reinforced Croatian Infantry Regiment 369.

After the fighting, Lieutenant Colonel Mesic and other legionnaires ( a total of about 700 men, including members of support units) - wounded, half-frozen soldiers suffering from typhoid, dysentery, scurvy and other diseases - were taken to Soviet prisoners of war. camps.
In the summer of 1943, Mesić, six officers and 100 legionnaires were transported to Krasnogorska, where they later met most of the other surviving Croats. In Krasnogorsk and later in Karasov, the Soviets began to form them into a new unit, "First Yugoslav Volunteer Brigades". Under the command of Marek Mesic, it was created by Croats and other Yugoslavs who were captured or found themselves in Russia during the war for other reasons.It is not difficult to understand that the Soviets did not recognize Tito's forces as an army of a sovereign state[/i] voluntarily to this unit in the uniforms of the Royal Yugoslav Army ([i]) a large number of former legionnaires enlisted to avoid almost certain deaths in prison camps. Most of the fighters and the entire command staff of the brigade were former members of the 369th Regiment.
The brigade, like many other "national" units, was to become part of the Yugoslav People's Army and was transported to Yugoslavia during 1944. During the Battle of Čačak at the end of the year, it was deployed against retreating German forces ([url=/topic/view/9800] 104th Hunting Division and 7th Division SS Prinz Eugen) and, together with cooperating guerrilla units, suffered heavy losses.

Tito upset the unsuccessful action, verbally attacked Mesić and also blamed him for his fascist past, but eventually dropped his punishment. Many of Mesić's comrades-in-arms were not so lucky. Many ended up in prison, and some - including the first commander of the Croatian Legion, Ivan Markulje - were executed. 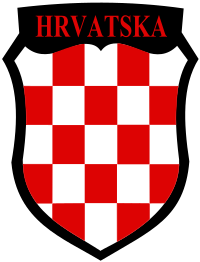 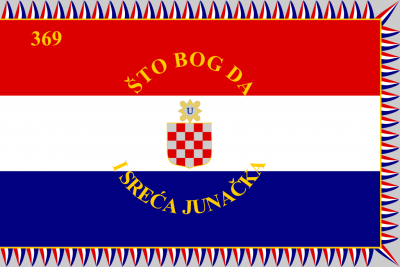 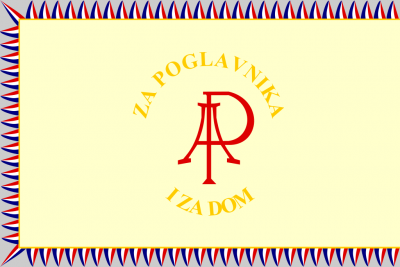 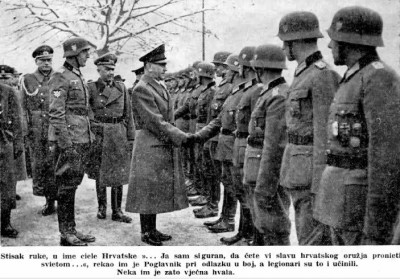